Review of Jione Havea and Clive Pearson, eds. Out of Place: Doing Theology on the Crosscultural Brink (Equinox, 2011), pp. 296.

Review of Jione Havea and Clive Pearson, eds. Out of Place: Doing Theology on the Crosscultural Brink (Equinox, 2011), pp. 296.

In his deeply impassioned and profoundly eloquent foreword to Out of Place: Doing Theology on the Cross Cultural Brink, Anthony Reddie provides the reader with an irresistible foretaste of the literary banquet that the editors of this book have so lovingly and so astutely assembled. Literally cover to cover each one of the chapters provides unique, insightful and powerfully challenging perspectives on what it might mean to feel, to be forced, to be born, to be accidentally or indeed to be lovingly invited into being ‘out of place’.

Any experience of human disadvantage, indeed any subsequent even unintended injustice, cries out for theological attention and response and none more so than the harrowing experience of not belonging to someone, to some people, and/or to some place.

As a seasoned and irrefutably still way ‘out of both time and place’ theological educator, it is my measured contention, in solidarity with virtually all the authors in this text, that twentieth and twenty-first century theology has largely failed to deliver on its inherently ‘Godly’ promise that some day all would belong and none would ever again seek to unjustly dominate. As one of the world’s original and thus pre-eminent academic disciplines, theology is surely responsible for focusing public attention and for generating appropriate Christlike activism for and with those unjustly denied the right to decent human existence, to identity, to belonging, to freedom, to unconditional inclusion in any and all civil societies. However in laying itself so open, at least over the past fifty years, to North Atlantic intellectual capture, theology has, inevitably, failed to contextualize itself into the lived circumstances of those (arguably the majority of God’s people) who lack the provisions necessary for sustenance let alone the guaranteed continuation of a decent human life.

As ‘the talk of God’ and therefore theoretically as the definitive discourse of justice, mercy, kindness, advocacy for the poor, those imprisoned, those condemned to the margins of life itself, theology must begin to redeem itself and to do so with real urgency. Globalization, technological advance, radically shifting political alliances, radically shifting religious influences and allegiances, are in subtle and dramatic ways each contributing to displacement both voluntarily and involuntarily on utterly vast scales.

Out of Place: Doing Theology on the Cross Cultural Brink is thus seminal to the redemptive project. Havea, with characteristic humility in his welcoming pages, respectfully positions this book alongside its forerunner texts, those written by highly respected authors Matsuoka and Sugirtharajah. The difference however is that this new addition to the literary banquet includes a far wider array of context specific ”ingredients” and the majority of its contributors write with reassuring fearlessness indicative of their confidence in the rightness and timeliness of their work.

Namsoon Kang’s eminently readable and deeply personalized chapter makes her discussion on Asian Feminist Theology a delight to ponder. Her reminder to readers of just how deeply affective one of the most readily posed and erstwhile benign questions—Where are you from?—between strangers can be, is most opportune. How readily as an apparently simple gesture of friendship we global travellers enquire this of the stranger we encounter—the taxi driver, the waitress, the conference colleague. The answer to the question, she rightly proposes, is politically and discursively complex and is one which very often carries wittingly or unwittingly racist implications especially when being asked by those privileged by either being thought of or considering themselves as normatively belonging.

Hisako Kunikawa revisits the project for which she has long advocated with deep faith, profound sincerity and unbounded compassion. She holds my utmost respect for her unwavering determination to bring to light the ignominious history of those Japanese soldiers since found guilty by the Women’s International War Crimes Tribunal 2000 of systematically raping and sexually abusing very young women from at least nine different countries. These women were intentionally and horrifically dehumanized on an unimaginably relentless basis. Their abuse is supposedly the “ultimate symbolic humiliation of the male enemy” (p. 138). This obscene proposition is utterly irreconcilable for the real victims, so incomprehensibly known as “comfort women” (p. 129). These were totally innocent young women rendered so violently and so completely ‘out of place’ by the heinous crimes committed against them.

Peter Matheson introduces Argula von Stauff, an extraordinary example of a woman most definitely out of place at a pivotal time in the history of the Church, during the early years of the Reformation. Matheson asserts that von Stauff’’s particular genius was in her recognition of the “possibility of quietly subverting a universe of repression from within” (p. 16). This particular strategy is highly contentious to those concerned with contemporary identity politics, and therefore likely readers of this book. Is it best for the systemically oppressed to be freed through the establishment of separate, culturally-bound jurisdictions to enable their future flourishing? Or is it best for the oppressive institutional mainstream—whether political, economic, educational, medical, judicial—to be transformed from within? The difference between the contemporary dilemma and that of von Stauff’ is that she fervently and unapologetically employed Scripture as her primary point of departure in her astonishing campaign to confront theologians, university and church leaders over what she saw as their unconscionable silence of issues of natural justice.

Gerald O. West’s chapter, Newsprint Theology: Bible in the Context of HIV and AIDS, is compelling in its deeply compassionate articulation of his uniquely contextualized way of enabling those unjustly destined to the underside of our societies to begin to speak and to think theologically and then ultimately to begin the journey toward living the lives God wills for all and not just for some.

While tempted to review individual chapters, suffice it to say that each of the contributors is to be congratulated for their intellectual courage and their forthrightness in writing, as Vítor Westhelle does, of “a God in the flesh who simply lived and keeps on living a dislocated existence in places and people where God is not supposed to be” (p. 63).

It is the consistent centrality of God’s preferential option for the poor, the dispossessed, and the displaced, which is so impressive in this book. This is the theology so desperately needed for our times. We need radicalized post-colonial theology, which, to borrow from Said, is “life-enhancing and constitutively opposed to every form of tyranny, domination and abuse” (p. 224). Out of Place: Doing Theology on the Cross Cultural Brink contributes significantly to the veritable feast one prays will some day soon grace the tables around which all deserve to gather to share God’s abundant and everlasting hospitality. 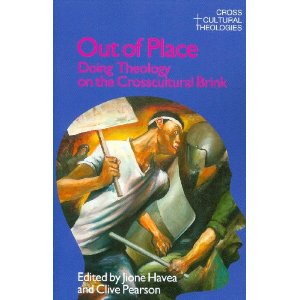