Recent events in the past two years show that the subject of human rights of Latinos/as in the United States is more urgent than ever. The enforcement of Arizona immigration law SB1070 and subsequent similar legislation in Alabama and North Carolina, have shown that the path to full recognition of the rights and freedoms of the U.S. Latino/a community is long, and that there is much to be done. The DREAM Act, which seeks to provide educational opportunities to low-income youth—of which Latinos/as are a large percentage, has been in U.S. Congress for years, and has suffered continuous rejection by legislators and conservative organizations.

Latina/o Social Ethics: Moving Beyond Eurocentric Moral Thinking, authored by Cuban-American Baptist ethicist and theologian Miguel A. De La Torre, comes at a time when the vital forces in Latino/a America need to rethink their strategies to fight against the barrage of discrimination that their people are suffering day after day. This discrimination includes the denial of education to thousands of undocumented students, especially in the Southern States.

The preface of the book begins by describing the situation that many Latino/a scholars face. Struggling against the dominant Eurocentric discourse, they have tried to overcome the stigma of being treated as part of the “exotic” in opposite to their U.S. and European counterparts. De La Torre uses the figure of the “new wine in old skins,” from Mt 9,16.17, to point out that in order to permeate the academy and their oppressed communities Latino/a scholars must pour liberating wine into their own ethical paradigms, and not into Eurocentric patterns, as they have been forced to do.

The book is divided into two parts: in the first, the author seeks to deconstruct the Eurocentric ethics that have permeated much of Latino/a thought and ethics, taking advantage of mestizaje diversity, outlining and taking distance from the Anglo-European paradigms without being co-opted, and without compromising or reconciliating with the logic of Empire.

The first chapter, “Moving Beyond Eurocentric Ethics,” deals with how many Euro-American ethicists perpetuate racism and discrimination through a “kinder, gentler” form of oppression. In particular, the author presents three ethicists who spanned the twentieth century: Walter Rauschenbusch, Reinhold Niebuhr and Stanley Hauerwas. For each one De La Torre shows how their ethical ideals were consistent with imperialism and support for military action to achieve U.S. domination over the world, and through the justification of colonialism and civil subjugation in order to establish the “Kingdom of God” through the social gospel. In the case of Rauschenbusch this involved advocating the “neutrality” of colonialism, which promotes the superpower status of the United States, under a dangerous scope that draws very near to racism, with the understanding that imperialist actions were urgent and necessary because they served as a counterweight to the Soviet Union’s advancing communism. In the case of Niebuhr and Hauerwas, this involves the reluctance to apply social justice principles to the gospel because such principles are assumed to deal more with the Enlightenment Project.

The second chapter, “Moving Beyond Eurocentric Religious Perspectives,” begins with a critique of the Religious Right and the Religious Left, as both seek to perpetuate the Empire without dismantling it. De La Torre demonstrates the danger this represents to Hispanic social location and calls attention to the co-opting of demands for social justice that many of the Religious Left groups perform when they identify these alternative initiatives as low priority.

De La Torre concludes the first part of the book by arguing that the U.S. Latino community must devote itself to establishing their own ethical and moral principles rooted in their own social context, using their own symbols, because the Eurocentric logic is dominated by the political and social forces of the Empire, invisibilizing Latinos/as.

The second part of the book, entitled “Reconstructing Ethics,” consists of two chapters: the first, “Where We Have Been,” looks back to 40 years of Hispanic religious scholarship to find clues to develop an ethical discourse firmly rooted in the Latino/a experience and culture, enriched by social concepts drawn from both fields.

Lo cotidiano, which is the locus theologicus of the book’s thesis, seeks to break the dichotomy between theory and practice through the incorporation of the hermeneutics of the self. Nepantla denotes “being in the middle” of two cultures, trying to make sense of creativity in the midst of community. La lucha denotes the oppression and discrimination that Latinos/as have suffering, and that they must overcome and conquer. An ethics en conjunto denotes that changes and survival initiatives should be approached collectively, so people become organic in their actions and initiatives and subvert the oppression of the Empire. And finally, an ethics de acompañamiento takes advantage of a preferential option for the poor, overcoming the rampant individuality of the Eurocentric logic.

The second chapter of this second part, “Where We Are Going,” seeks to place Latino/a ethics through which De La Torre calls an ethics para joder, which is a strategy to subvert enslavement and discrimination with practices and decisive events in which the whole community participates, in order to instill boredom and despair within imperialist forces. De La Torre seeks an ethic that identifies elements of imperialism and brings chaos to them, and that also moves liberationist claims toward concrete acts of subversion and liberation. The figures of the joderón and the trickster are key in De La Torre’s thesis, achieving their purposes through deceptive and liberative acts, so that new opportunities and liberative praxis may be provided to all people in all places and in all situations.

Natanael Disla is a MA Candidate in Gender and Development in the Technological Institute of Santo Domingo (INTEC), Santo Domingo, Dominican Republic. He is also a member of the Latin American Theological Fraternity. 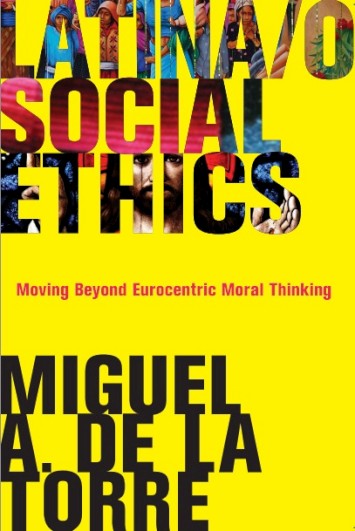