This well-researched and extensive book explores the possibility that colonialism in Africa may have prevented indigenous cultural self-realization from blossoming into an African modernity. This project of research, that for the author took twenty years, started with questions about the implantation and development of British Commonwealth law in Nigeria, Kenya, and Tanzania. Táiwò asks: Why was it that systems of law as colonial inventions remained under-developed in Africa while they were evolving in other English-speaking countries of the so-called Commonwealth? Were there particular reasons for the non-compliance and ineffectiveness of concepts foundational to British law that were, in fact, never applied in Africa?

Táiwò recognizes that “part of the apologia of Africa’s colonizers was that their legacy included the implantation in the colonies of the following concepts:

1) a democratic mode of governance built on the consent of the governed
2) a system of governance based on the periodic election of representatives
3) elected officials who swear to uphold the rule of law
4) a constitutional regime in which every citizen is equal before the law
5) a legal system that does not try individuals under retroactive laws
6) a legal system that does not respect persons based on circumstances of birth or heredity,
7) an assumption that the accused are innocent until proven guilty
8) trials that are regulated by due process
9) a system that affirms and upholds human rights, including the right to life, liberty, and all ancillary freedoms” (2).

Their possible legacies are associated with the Enlightenment or modernity; however, they were built into a law that never arrived on African soil.

For Táiwò, the crux of the problem is that Africa has not managed to uphold these values in the face of the long-standing dictators, family feuds, and human rights violations that are rampant in the nations previously part of the colonial British (West) Africa. Táiwò though, assumes that his philosophical reflections are valid for French-speaking Africa and Lusophone Africa as well. The general argument posed by this work is that Africans were prevented from exercising their own enlightenment, identified with the possible mixture of colonial and indigenous forms, and that this process of cultural prevention led to a complete failure of the European model of colonial and military institutions within Africa. Nevertheless, Táiwò argues that there was one area in which Africans developed their own modernity and made it possible for the combination of indigenous and European to become African: the area of missions and Christianity.

It is clear that the author uses some of the typologies developed by V. Y. Mudimbe in The Invention of Africa (e.g., three organizational types that colonized the minds of Africans: soldiers, colonial officers, and missionaries). Where Táiwò differs from Mudimbe is in his distancing from Mudimbe’s critical challenge to Christian missions as colonial enterprises. Táiwò, instead, argues that the only area in which Africans were allowed to dictate their own development was within the development of Christianity in the 19th century. Through African agents and their own subjectivity, Christianity as the colonial religion became African as suggested in the case of the Yoruba of Nigeria. This part of Táiwò’s work provides an affirmation of the first class work of scholars of African Christianity such as J. D. Y. Peel and the late Adrian Hastings.

While this work sets its foundations on the history of thought and the history of law, in its last part it argues for a future for Africa linked to the on-going process of globalization. If the mark of modernity is subjectivity, then to be modern is not necessarily to be Western, according to Táiwò. If the conclusion is short, it is because Táiwò invites other scholars to apply the reading of an African modernity to other African writings and histories within the colonial period, commending others who have already done so; namely, Anthony Appiah, Abiola Irele, and Paulin Hountondji.

This is a complex work, highly recommended to scholars of post-colonialism, that leaves one with the same feeling one has when one reads V. Y. Mudimbe: an enormous amount of research and thought that brings order to disorderly passages in the history of African ideas.

Dr. Mario I. Aguilar is the Director of Research and Professor with the Divinity School at the University of St. Andrews, Scotland. He is also a board member with the Journal of Postcolonial Networks. 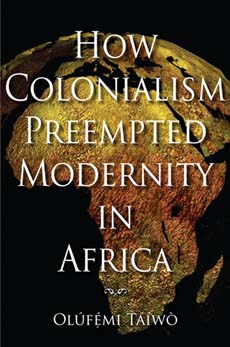