Davis, Kathleen. Periodization & Sovereignty: How Ideas of Feudalism and Secularization Govern the Politics of Time. Philadelphia: University of Pennsylvania, 2008.

Davis, Kathleen. Periodization & Sovereignty: How Ideas of Feudalism and Secularization Govern the Politics of Time. Philadelphia: University of Pennsylvania, 2008.

In Periodization & Sovereignty, Kathleen Davis illuminates the political uses of historical narratives whose periodizing operations suggest sharply distinct medieval and modern epochs. Davis traces the historical provenance and contemporary uses of feudalism and secularization as concepts, and finds both linked within an evolving lineage of political sovereignty  historically implicated in colonialism.

Davis begins by introducing her thesis: “the history of periodization is juridical, and it advances through struggles over the definition and location of sovereignty” (6, emphasis in original).  For Davis, it was through periodization that sovereignty was established and consolidated both in metropole and colony, and it remains the regulating process of sovereign power today.

Davis marshals an impressive body of historical and theoretical material to her argument, however, the book disappoints slightly in its lack of sustained engagement with contemporary politics. This remains a relatively minor and subjective quibble with a work whose historical scholarship remains  its strength.

Chapter 1 outlines a narrative of a feudal past formed through a series of sixteenth-century legal debates. This feudal grounding laid the basis for the modern political subject and the emergent social contract, whilst discursively obscuring the contemporaneous slave trade – inaugurating its association with an atavistic past (8).

In the subsequent chapter, Davis continues to trace a genealogy of  feudalism in England as a category at once subject to reified and evolving conceptualizations in the service of an emergent colonial imperative to civilize subject peoples on the basis of their medieval backwardness.  Here, Davis discusses the impact in seventeenth-century Ireland of a newly minted judicial recognition of an emergent strand of historiography which asserted a Saxon rather than Norman basis for feudal property law – in effect allowing for the displacement of an Old English, Catholic landowner class whose origins can be traced back to the Norman invasion of the late 1100’s, by  later New English colonizers who were to become the Protestant Ascendency of the modern period (149, n 15, 17).  For Davis, who treats of these debates and judgments in some detail, the category of feudal law (and, by implication, of the designation of the term feudal itself) was seen clearly as “a discourse on sovereignty and a potentially lucrative theory of property” (55).

In chapters 3 and 4, Davis’ focus switches to secularization. In a move with parallels in recent Irish cultural criticism – reminiscent of the work of David Lloyd, Luke Gibbons and Kevin Whelan  – which theorizes the ‘pre-modern’ as an artifact which can be said to be produced as much as transcended in modernity, Davis links feudalism with secularization. As she notes, secularization is a process and remains tied to periodization. Here, Davis engages with the work of Dipesh Chakrabarty whose Provincializing Europe argued that the European narrative of secularization constituted an historicism which enabled the colonial project by means of assigning “historical time as a measure of the cultural difference” (Chakrabarty, 2000, 6) between European metropole and colonial periphery. The modern, by this logic, originated in Europe, and only later did the advances enlighten those outside the metropolitan centers, legitimating the idea of civilization – both the civilization of the west, (in its modern, non-feudal form), and the colonial civilizing mission itself. The story of secularization, then, “moves directionally with the conceptualization of feudalism, but away from the structures characterized as feudal” (Davis, 11). In this way, Davis argues, feudalism is constructed and re-constructed as an atavistic foil against which modernity, characterized by secularization, may be defined. The parallels with colonialism are all too obvious, and are nicely rehearsed here.

It is worth noting  Davis’ commitment to even-handedness in her gloss of the tensions between Chakrabarty’s dual calls “for secularism that would ostensibly protect minority rights, and the incentive to turn to religion as a site of resistance to Enlightenment ideals and to the “secularized” norms of the majority” (99). Davis raises some pertinent points here – most notably  the sometimes cozy relation between anti-colonial nationalist historiography and a medieval/modern periodization of native history. Such discursive framing can be seen in attempts to modernize the newly ‘liberated’ former colony, which remains caught within the circuits of a new imperialism.

The  book is not without its’ weaknesses. Primary among these is a dearth of treatment of the contemporary politics of religious belief. This is perhaps understandable, given the attention already accorded the issues by the likes of  Žižek and Badiou in what has become a voluminous literature. Still, given this prominence and its clear relevance to the work, such oversight remains slightly disappointing.

“[W]hy,” Davis writes, “in the face of all challenges to teleological and stage-oriented histories, do the monoliths medieval/religious/feudal and modern/secular/capitalist (or “developed”) survive, and what purposes do they serve?” (2). Periodization, as the basis of political order is the avowed basis of her book  – an operation which depoliticizes religious expression as something “pre-political”, medieval, and non-Western (3). This reading of the functioning of secularization within modernity  (treated in a colonial context by Ranajit Guha ) is the guiding premise behind much of Davis’ book, and is conveyed with care.

What is not addressed, however, is the possibility that these postmodern “challenges” belie their own functioning  – the irony that  questioning of teleological historicism is itself a periodizing gesture. In a present which acknowledges the legitimacy of competing claims, a claim for historical redress can be readily discounted as a morbid historical obsession with what is in the current economic crisis, an irrelevance. Loss of faith in meta-narratives, is no longer, if indeed it ever was – a movement of liberation; instead, it might be argued, creating a reified contemporaneity  dislocated from a past of naive politicized ‘innocence’. Religious minorities have much at stake. Increasingly, it is clear that the ascription of a religious label functions not solely to depoliticize, but also to highlight the overtly politicized, ‘ideological’ basis of marginal groupings.

The success of  Davis’ work rests upon her remarkable ability to absorb and communicate widely disparate material. As such, her project deserves attention and its scope should reward readers with novel insights outside their own disciplines. Davis’ treatment of the production of the secular will appeal to students of theology seeking an introduction to the debates and their foundations. Although the book does not attempt to be comprehensive in this regard (Davis treats of Foucault and Said relatively briefly, for example), Davis’ rigorous end-notes and bibliography provide excellent additional sources. Consequently, the  book’s historical breath will recommend itself to postcolonial scholars in search of a more detailed exegesis of the nexus of  feudalism,  colonial historiography,  and modernity. 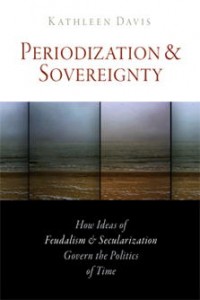 About the Author: MARK TYNDALL