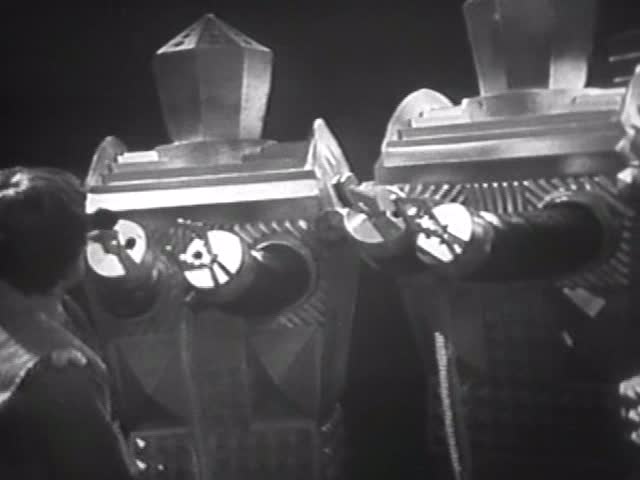 The Doctor Who episode The Krotons features what to viewers in our time will appear to be quite primitive and poorly-constructed robots as the key villains. If one can get past the appearance – perhaps by keeping in mind that the Krotons are supposed to be not robots but organic crystal-based life forms that are intellectually and technologically advanced, then one may be able to see beyond the low-budget costumes and appreciate the episode for what it is: a powerful statement about the use of education by colonial powers and more generally in order to reinforce rather than break down class divisions.

In preparing to blog about this episode, I came across a PhD dissertation from Australian National University, freely available online, about Doctor Who. The author is Lindy A. Orthia and the title of her dissertation is “Enlightenment was the choice: Doctor Who and the Democratisation of Science.”

The Krotons (1968-9) is a more straightforward case along Hodgsonian lines. The oppressors in this story are the crystalline Krotons, who require ‘mental energy’ to repair damage to themselves and their craft. The Krotons have enslaved the humanoid Gonds, and educate them in order to feed on their enhanced brainwaves, inviting the smartest students to join their ship, wherein the students are secretly ‘eaten’. The Krotons control the Gonds’ education through learning machines, but are careful to omit knowledge that the Gonds might use against them, for example the fact that the Krotons’ tellurium bodies can be destroyed with sulphuric acid. This equates to a Chomskyesque metaphor for capitalism’s use of the education system to perpetuate class oppression: the populace are kept selectively ignorant and therefore powerless because the education system’s sole purpose is to identify the most ‘intelligent’, who are plucked away to serve the ruling class. Like An Unearthly Child, The Krotons is a critique of the hoarding and manipulation of science to maintain power. The Doctor’s solution to the problem is to fill the Gonds’ intellectual deficit with chemistry, effecting a successful revolt and the Krotons’ death through the democratisation of scientific knowledge about sulphuric acid.

When I watched and listened to the episode over the past few days, it struck me even more how the episode pertains to the subject of colonialism and a postcolonial setting. The Krotons have landed on a world not their own, and are interested in the original inhabitants only for their own purposes – in this case, using their mental capacity as a sort of “fuel” to get their spacecraft working again. They refer to the state in which they found the Gonds as “savages” and have elevated them through (selective) education – on the one hand, withholding knowledge that could be used against the Krotons, and having the teaching machines not only impart knowledge but also docility, while on the other hand, not actually being interested in the education of these people as an end in itself, but viewing the conquered as a commodity the education of which is only useful inasmuch as it serves the ends of the conquerors.

Those who have lived in a colonial setting have often struggled with the issue of whether embracing the education colonizers offer, or avoiding it, is the best way to go about protesting and resisting. This issue comes up specifically in relation to postcolonialism and science fiction in the introduction to the volume So Long Been Dreaming: Postcolonial Science Fiction & Fantasy which I reviewed a while back for the Journal of Postcolonial Theory and Theology). In response to a question about Audre Lorde’s comment that “Massa’s tools will never dismantle massa’s house” it is suggested that tools can be universal. In “The Krotons” it is indeed a theme that science is universal, and even though the Krotons may have brought it to the Gonds, the Gonds can take it and experiment and seek knowledge for themselves.

One can obviously also use the story as a parable of one all-too-common approach to religion which seeks to hijack the minds of people with great potential for creative and insightful thinking, by restricting the sorts of educational materials and information to which they are exposed.