“This essay investigates the intersections of religion, social transformation, and Marxist social theory in the thought of Jacques Roumain. It argues that Roumain’s radical perspective on religion and development, and his critiques of institutionalized Christianity, were substantially influenced by a Marxist conception of historical materialism and secular humanist approach to faith and human progress. Roumain rejects Christianity for its ineffective societal role in fostering social change. This essay also contends that Roumain’s rejection of religious supernaturalism and divine intervention in human affairs and history was shaped by his non-theistic humanism and secular worldview on faith. Ultimately, the essay demonstrates that Roumain believes that only through effective human solidarity and collaboration can serious social transformation and real human freedom take place. He downplays the potential role of religion to deal adequately with the ambiguities of life in this world. Roumain holds that man is the measure of all things and his own agent of liberation. Consequently, individuals themselves must cooperate and unite in order to alter the social order toward a fruitful life of peace, harmony, and freedom.” 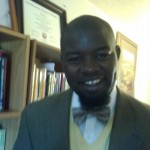 Dr. Celucien L. Joseph is an adjunct Professor of English Language and Literature at Palm Beach State College. Professor Joseph is interested in the intersections of history, race, religion, literature, and cultural identity. He is the author of the new book, Race, Religion, and the Haitian Revolution: Essays on Faith, Freedom, and Decolonization. He is presently working on several forthcoming books: Religious Métissage: The Religious Imagination and ideas of Jean Price-Mars (under contract with Wipf & Stock), Faith, Secular Humanism, and Social Development: Jacques Roumain’s Engagements With Religion and Critical Theory (under contract with University Press of America), and “The Haitian Turn”: Haiti, the Black Atlantic, and Black Transnational Consciousness (under contract with The Edwin Mellen Press Ltd).