Francis, a pope of la lucha???

Francis, a pope of la lucha???

“Habemus Papam” . . . words that signaled the beginning of a new chapter for the Roman Catholic Church, words mixed with excitement, hope, dread, and yearnings for transformation. The election of Pope Francis was and is an important event not only because he is the spiritual and political leader of the Catholic Church, but because he is the first pope of color chosen to sit on the throne of Peter since perhaps the Apostle himself, perceptions based on constructions of race here in the United States. Taking this a step further, his election also reflects a different kind of first—yes, he is the first pope to hail from South America, but this also means that he is the first pope from a land that was colonized socially, politically, and spiritually by Europe, a colonization endorsed and blessed by the very seat of power on which Francis now sits. I wonder what moved the College of Cardinals finally to value an expression of Catholicism from an area of the world where Christianity was imposed and used to justify the annihilation of local cultures? Were they aware of these dynamics throughout their discernment?

I don’t envy Francis and worry about his sanity. People from all sides of the theological spectrum are imposing on him their agendas from conservatives wanting him to uphold the status quo to progressives calling on him for needed reforms. He has only been in his new role within the Church for a few days and already has an unrealistic list of dos and don’ts. We need to give him space to breathe and time to settle in, at least enough time to figure out where the bathroom is in the Vatican, before he can press the magical button that will fix everything according to the diverse ways each of us think things needs to be fixed.

The Spirit has broken new ground with Francis and through Francis—first South American, first Jesuit, first Francis, first to ask for shared silent prayer. As a priest, bishop, and cardinal, he strove to be in relationship with those in his diocese and was aware of the Church’s prophetic vocation to respond to issues of economic injustice. His views on reproductive justice, the role of women in leadership, and the place of queer Catholics, however, leave much to be desired. His positions have been sources of both praises and curses. Like many, I, too, have my litany of hopes and desires for things that need to be undone, redone, and created anew within the Church. But I have also realized that Francis is just one person, a person who like me (and like all of us) is filled with contradictions, who will not always get it “right,” and who will try his best to be faithful to the Spirit (like all of us do). Francis is our leader, but he is not the Church. My prayer, hope, and soul-filled yearning are that we as a community of faith recognize that together we are all THE Church.

The shoes into which Francis is stepping are filled with a lot of baggage—mishandlings of sexual abuse, increasing acts of violence throughout the world, decreasing numbers of folk seeking the priestly vocation, and a growing number of people who feel disconnected from and sense of abandonment by the Church. If we believe that we are all the Church, this baggage is not his to bear alone—we must all carry it and do our part to heal the church. Saint Francis of Assisi was entrusted with the mission to “rebuild my church”; it was a mission that he could and did not live into alone. The mission of “rebuilding church” was embodied by a community, a group of people who supported each other, nudged each other, challenged each other, and ultimately loved each other. It is this same Spirit that we must embrace today—the problems facing the church cannot be solved by one man but will take all of us tapping into holy chutzpah to repair, reform, renew, and re-member the Church.

May Francis of Assisi, Mother Frances Cabrini, Francis Borgia, Francis Xavier, Francis of Sales—all known and unknown “Francis” saints—surround our new pope; may they walk with him, mentor him, nudge him, and inspire him. May he, and all of us, be filled with the Spirit’s sacred sass to rebuild a Church for and with all people. 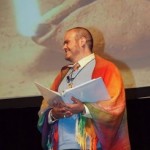 Delfin W. Bautista is a native of Miami, FL and is of Cuban and Salvadoran heritage. Delfin is a social worker and queer theologian who is passionate about engaging the intersections of religion, sexuality, race/ethnicity, and justice—specifically around LGBTQ issues. Delfin has a Master’s in Divinity as well as a Master’s in Social Work. Delfin’s background includes work as a chaplain, case manager, and therapist. As an activist-scholar of faith, Delfin is interested in creating spaces where individuals and communities are safe and challenged to explore identity, expression, gender, and orientation in their complexities.