The author’s intention in Abuse, Power and Fearful Obedience is to address how women/wives are constructed by 1 Peter. Bird does so by analysing what she describes as their “circumscribed subjectivity prescribed by kyriarchical structures and power relations, created and sustained by abusive power dynamics” (p.86). By viewing the text through a postcolonial, feminist, and materialist lens Bird raises some challenging questions about the way 1 Peter can be used to subdue and control women, and she offers the reader an introduction into the patriarchical /kyriarchical reality that is present in the Christian text.

Bird begins by outlining previous scholarship and introducing her tripartite lens, namely her postcolonial, feminist, and materialist critique. These terms come fully loaded and consequently some emphasis is placed on how they are to be understood within the context of her project. Bird also places a strong emphasis on understanding the Haustafel that is endorsed and promoted in 1 Peter, which she believes is one of the major underlying factors that contributes the subjection and abuse of women in the Christian community, both for the community that 1 Peter was written for, as well as the Christian community throughout history up until the present day. Bird discusses the role of the women/wives in the household and their role (or lack thereof) in the communities they were a part of in order to stress the subduing and silencing of women by their husbands, as well as by their religious leaders and elders in order to maintain the Christian movement.

In her conclusion, Bird develops her argument on the submission and control of wives to speak about how this silencing also entails abuse, not only in a mental capacity, but also in a physical capacity. She discusses how the letter of 1 Peter promotes the continued submission of wives to their husbands by encouraging and praising silence and child bearing, which is followed by excellence in homemaker activities. This encouraged silence, she argues, is what allows for the physical abuse to occur since the women is to dutifully accept the rule of her husband and offer her physical body to her husband when required, whether she willingly consents to do so or not. Bird then brings her argument outside of the letter 1 Peter and notes that the same values which were encouraged and praised in 1 Peter are still held up in many cases today of what makes the ideal women/wife. Bird therefore argues that this patriarchical reading of 1 Peter, and the Haustafel that it endorses, has created a trickle down effect that has left women across the centuries afraid and alone, suffering silently in imitation of Christ’s suffering, because this is what they understand the Bible, specifically 1 Peter, to be instructing them to do.

As Bird notes in her introduction, this tripartite approach of using a postcolonial, feminist, and materialist critique does add a new dimension of exegesis to the topic of 1 Peter. By bringing in the political and social ramifications of the letter, as well as examining the treatment of women/wives and the subjugation of non married women and slaves, Bird brings up some interesting and valuable points to consider when reading this text and indeed all Christian texts. The postcolonial lens in particular offers a new perspective to understanding and analysing 1 Peter, and therefore this work contributes something new to an emerging field within the Theological landscape. Some of the topics that Bird analyses using this postcolonial lens include: the Haustafel that 1 Peter endorses; the in(ex)clusion of slaves within that Haustafel; the appropriate forms of dress for women; the place of the household as part of the empire and overall Christian movement; and the encouragement of women to act in the footsteps of Sarah, the faithful wife of Abraham, by encouraging silent suffering. Bird also examines what she calls ‘Symptomatic Interruptions,’ within the text of 1 Peter, which she believes provides some clues about the author’s intentions and thoughts which are not made explicit in the letter. Overall, the work is very well laid out, Bird’s writing style is easy to follow and her definitions are clear and succinct.

A significant portion of the book is devoted to background information and as a result her tripartite lens is not as fully developed as the reader might hope. It would have been helpful if more pages were allocated to the explication and application of the new insights that Bird raises, rather than discussing the ideas and theories of others who write within a similar genre. In the conclusion of the text, Bird makes a hard push towards emphasising the abuse and subordination that 1 Peter caused wives/women in the community it was written for, as well as for the Christian women of today who read this text. While reading with a postcolonial and feminist lens challenges the reader to consider these possibilities and to liberate those who have been silenced in the text, Bird borders on pushing her conclusions further than her evidence is able to take the reader which results in a weakening of her arguments and overall observations.

Abuse, Power and Fearful Obedience is overall a well-written book. Bird’s contribution to the field of postcolonial theology through this work is evident in her approach to and understanding of 1 Peter. She poses helpful and insightful questions, and presents her findings in an accessible manner. She tries to cover a significant amount of information in an insufficient amount of space however, which is partly due to her tripartite lens with which she analyses 1 Peter and its promoted Haustafel. In an effort to present the whole picture too much background information is provided which distracts the reader from Bird’s own conclusions and methods. The project leaves the door open for further work and research in this area by providing a foundation to build upon, and also poses a challenge to those who disagree with the feminist, postcolonial and materialist critique to offer a response on the commands of 1 Peter to wives.

Sarah Grondin is a doctoral student in the History Department at Regis College. 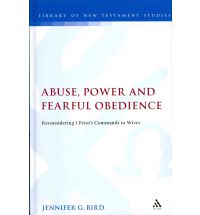