Hip-Hop and Justice Making: 10 Picks from an Artist

Hip-Hop and Justice Making: 10 Picks from an Artist

I purposefully selected songs from artists who are either fairly well-known or bona fide superstars to show that the hip-hop community has potential to use art responsibly to speak out against social ills, potential even for those from whom we least expect a justice-oriented voice.  I also chose songs from the last decade (2002-2012) to show that speaking out about justice in hip-hop didn’t only happen in the “Golden Age” of the genre, that is, before its mass commercialization particularly in U.S. culture.

Ms. Hill is one of the reasons I believe in the power and depth that music can convey.  Though she has surely experienced her fair share of personal challenges over the last decade, indeed, she remains one of my main inspirations in music making.  This song is one that most clearly displays her ability to go deep.  She cries for freedom from corrupted religion, political cover-ups, and even the shortcomings of educational hierarchies.  If you want to keep polite company, don’t play this song at your function.  But if you like a little prophetic reflection on politics and religion blended with a classic, yet eclectic, hip-hop delivery, then you should add this song to your iPod (or other device).

Though it’s “just” a cover, this track goes hard.  While Jay-Z and Kanye West’s original version of this song includes a celebration of African-American opulence and fantastic escapism, Bey (formerly known as Mos Def) addresses the existential realities of poverty and perils for folks with less than glamorous experiences.  It is not often that you hear a rap song address the relationship between poverty, drugs, psychology, and survival.  In an attempt to reclaim what it means to truly be a king or queen, Bey invokes the sovereignty of God in matters of disrupting addiction to capitalism and materialism.  And implicitly he challenges the notion of thriving at the top, while folks around the world still face immense struggle.  Don’t get caught up in that throne.

Always the reflective skeptic, Lupe Fiasco doesn’t hold anything back here.  If you ever wanted to hear a hip-hop artist address the educational system, the news media, the politics of choice, the co-optation of sacred religion, and the finance system all in one fell swoop then this is it.  If you feel overwhelmed after listening to this, then I think you actually listened.  The ills and evils Lupe names are, indeed, overwhelming.  He presents all of this as if he has held in all these thoughts and finally got an opportunity to just spill it all out at once.  In doing so Lupe loses some opportunity to go more in depth, but at least these are not suppressed words he will have never said.

A breath of fresh air on the hip hop landscape, Kendrick Lamar writes with an honesty and attention that often gets overshadowed by the genre’s superficiality.  Where Lupe Fiasco covers a variety of issues on  “Words I Never Said,” Kendrick Lamar focuses his observations on the ills of prostitution.  He reflects on the causes and effects of this evil—familial missteps that inform rebellion; police corruption; and religion’s inability to speak to this predicament.  “Keisha’s Song” illustrates the desperation attached to the deep desire of escaping a life of bodily subjection, the male gaze, and the constant threat of death.

Using the instrumental from Eminem’s original eye-opening song, Angel Haze crafts this track, which is downright heartbreaking.  It’s gruesome. It’s graphic. It’s hard to stomach.  As a fellow artist, I can do nothing but affirm Angel Haze for pouring her soul and telling her own story of enduring years of sexual violence.  Haze’s courageous attention to dreadful detail, here, reminds me of the wretchedness of slavery that was recorded in the slave narratives of Linda Brent and Frederick Douglass.  She sheds light on the issue of rape in a way that has the delicate potential to inform people of its truly horrific nature and maybe even to provide healing for others who feel a sense of insecurity or loneliness in facing this pain.

Some artists are more willing to engage in critical introspection after tragedy strikes.  This song is an example of that.  In response to the debacle that was government-sponsored Hurricane Katrina relief efforts, Jay-Z levels a harsh critique against President Bush for not showing up in New Orleans in an appropriate manner.  But then Jay launches perhaps an even harsher critique of himself and other rappers.  Ne-Yo adds to this self-critique, expressing personal guilt over his perceived failure to really make a difference.  Reflecting on his failure to address poverty adequately, Jay-Z realizes that throwing money at a systemic evil simply isn’t good enough.  In fact, Jay defines that methodology as a lack of concern.  Jay-Z is an artist who is often cited as someone that has perpetuated cycles of damage because of the misogyny, materialism, and violence embedded in his lyrics.  But I’m glad he’s got this song in his catalog.

Questions. So many questions. And implanted in these questions is outcry, most of which is in response to policies of the criminal justice system.  Jadakiss raises many other concerns here including big business, unemployment, the origin of the crack epidemic, and political cover-ups.  Taking a sort of philosophical posture, he also questions the media image minorities have to portray in order to achieve mainstream success.  And then there’s the juxtaposition of the beat with Anthony Hamilton’s vocals, which evokes the cornbread and candied yams of black struggle—the sweet rasp of experiencing joy even in the midst of overcoming the obstacles buttressed by systematic oppression.  The Yonkers MC and the Charlotte crooner took a stand with this one.

Painting pictures of urban reality, Common weaves in and out of this gritty beat to produce beautiful language with bleak images.  Kanye’s energy on the hook seems to match the desperation of survival that he’s describing in the lyrics.  And the cadence of Umar Bin Hassan typifies the connection between not only hip-hop and poetry, but also between hip-hop and social movement.  All three work to reclaim negative stereotypes attached to life on the corner by providing background information for why and how folks “cope from the lows.”  These three legends on a classic Kanye instrument is a recipe for depth.

With a country-fried flow, Big K.R.I.T (King Remembered In Time) tackles topics like religious impropriety and societal lies about personhood.  Rooted in faith that God will sustain him, he also confronts the realities of classism in a system that promotes social mobility.  To do this, K.R.I.T. also tells his story of combating stereotypes based on geography.  And he subtly comments on the volatile connection between zoning, education, and opportunities accessible only to some folks.  I leave this song feeling like I’m as small as a giant, too.

Of course a large focus of this song is on jewelry as well as the symbolic hand gesture signifying allegiance to the Roc-A-Fella music empire.  But Kanye’s verse goes far deeper than just rocking chains and reppin’ a crew.  He can’t talk about diamonds without talking about the horrific violence attached to obtaining them, right?  Well, this time, right.  Here, Kanye makes the connection between international drug trade, U.S. American consumerism, and West African blood diamonds.  He even recounts his own ignorance regarding the matter.  That people lose limbs and life so that others can don flashy neckpieces seems deplorable to Kanye.  Although I’m unaware of how if at all this track actually impacted the operation of trading conflict diamonds, he certainly introduced an issue that affected the purchasing practices of members of the hip-hop community. 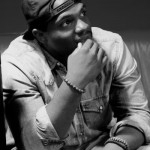 Rodney “J Prophet” Reynolds is a third-year Master of Divinity student at Yale Divinity School from Mt. Vernon, NY.  He is also Founder & President of Peace and Power Media.  As a recording artist, he blends his music with a Jesus-oriented message of love to create jazz-inspired, soul-infused, and gospel-informed hip-hop.  You can follow him on Twitter (@JProphetPAP), Facebook (J Prophet), and his website (jprophetpap.com).