It is hard to imagine that those who met her forgot their meeting with Marcella Althaus-Reid (1952-2009), the author of Indecent Theology (2000) and The Queer God (2003). Though Marcella could seem quite modest and proper, as Kathleen Sands testifies (p. 44), she had an intensity and enthusiasm, both in herself and for those she met, that no one she engaged could ignore. Mary Hunt found her “shiny—from her boots, to her prose, to her flashing eyes” (p. 22). That shine and intensity is reciprocated in the essays collected in this book, written in honour of Marcella’s life and career, and written with a force matching her own. The editors have garnered twenty-one essays from friends, colleagues and students, and those whose work was changed through reading Marcella’s challenging writing. We will have to risk the word, but these are passionate essays, which testify to both the life and work of their subject, and the life and suffering of the people that rooted her indecency.

Many of the contributors describe their first and subsequent meetings with Marcella, and the way in which she came to inform their own thought and practice. Robert Shore-Goss does this in the book’s first essay, introducing Marcella’s indecent theology as “nomadic” (p. 2), and relating it to the “dis/graceful” life of the MCC congregation that he pastored in North Hollywood. Mary Hunt prefers to think of Marcella’s writing as “surreal,” and admits that she sometimes finds it hard to make sense of its ideas (p. 21), but wonders who will do the necessary work of their deepening now. As if in answer, Kwok Pui-Lan relates Marcella’s theology to larger post-colonial interests, and the development of hybrid theologies, as between Christianity and East Asian philosophies (pp. 42-43).

The essays in this book are not simply adulatory. Many are also critical, as befits a subject who sought to discomfit and undo the securities we all fall into. Kathleen Sands finds that sometimes, indecent theology consists in doing the decent thing, as in the defence of same-sex marriage. Marital decency becomes indecent when it involves members of the same sex, and in the context of Hawaii, political and sexual liberation are not always easily aligned.

Emilie Townes worries that the poor—such as the lemon vendors of Indecent Theology—are objectified through their display, and marvels that no mention is made of “Afro-Latinoas” (p. 65) among them. Yet she takes from Althaus-Reid the difficult recognition that there are many layers of oppression, with us always between them. Mayra Rivera Rivera is also struck—disturbed—by those lemon sellers, without underwear, whose “musky smell” mingles with the scent of their lemons (Indecent Theology, p. 1), and starting from them considers the rhetoric and aesthetic effects of Althaus-Reid’s indecent writing. Rivera treats Althaus-Reid’s women as characters (p. 86), poetically deployed to render the material-transcendent truly shocking: God dwelling in the sweat of workers and their transgressive pleasures. This then develops into a fascinating discussion of fetishism and ancient Christian relics, and the investing of parts with the power of the holy.

Susannah Cornwall reminds us that Althaus-Reid put God and sex together in order to show that sex is not private but public, for it is always figured and disfigured by forces that obliterate the differences that call them into question, and many of these forces are theological. Thus, the recourse to a queer God—to a God other than the Otherness of capital T tradition and theology. But Cornwall thinks the tradition queerer than Althaus-Reid allowed, and so puts her into dialogue with theologians more open to this thought: Elizabeth Stuart, Grace Jantzen and Nancy Eisland. But all point to a God who arrives in the confusion of human relations: in a “natal, dying, embodied, sexual, dirty, broken and beautiful world” (p. 112).

Stuart herself contributes one of the best pieces in the book. She has nothing but admiration for Marcella’s ability to theologize the erotic and transgressive, but she is critical of Althaus-Reid’s inability to move beyond the sexual, to relativize its importance in human life. Stuart develops a theme that is to be found in much of her recent work, namely that God calls us to transcend both gender and sex, and to allow such a post-gendered life to now inform our sexual relationships, so that they are no longer everything to us. Stuart develops this idea through an account of the Eucharistic liturgy, developed in richly Trinitarian terms. This theology is more traditional, but no less radical, than Althaus-Reid’s.

Graham Ward also celebrates Marcella’s indecent theology, as a critique of existing theological structures, but faults its lack of a more constructive aspect. He fears that the God of indecent theology is too close to a Freudian projection or pantheist companion. He argues that theology needs a point of revelation if it is to avoid becoming purely speculative, and suggests that this can be found in Althaus-Reid’s commitment to the Bible as a source (and not merely a resource) for her reflections.

Elsewhere in the book, Lisa Isherwood dialogues with Eve Ensler’s Vagina Monologues, and Mark Jordan relates Susan Sontag’s famous essay on camp to the camp present in church and theology in the context of Althaus-Reid’s own work on drag and theological display. André S. Musskopf reflects on how Marcella influenced his own developing thought as a student, and Nancy Cardosa Pereia and Cláudio Carvalhaes write on the poet Adélia Prado and Marcella’s image of lifting God’s petticoat.

Althaus-Reid’s Edinburgh colleague, Alistair Kee (1937-2011), argues that the arrival of postmodernism has done away with the social contexts in which three types of liberationist theology (feminist, black, and Latin American) made sense. They appeared toward the end of the 1960s, in the work of Mary Daly, James Cone and Gustavo Gutiérrez. But twenty years later, the deconstructionist critiques of Judith Butler, Victor Anderson and Manuel Vásquez, arrived to undo the essentialising of women, blacks, and the poor, on which all the liberatory movements depended. Althaus-Reid’s work is seemingly placed as post-essentialist, but one might wonder how securely, after reading other essays in this volume.

However, Marcella Althaus-Reid’s work does come out of Latin American liberation theology, and Ivan Petrella, Hugo Córdova Quero and Mario I. Aguilar seem to think it has a future, even if it is one that needs the work of people like Althaus-Reid to get it there. Hugo Córdova Quero provides the most substantial piece by these essayists, arguing that Althaus-Reid’s liberation theology has its basis in the work of Juan Luis Segundo.

Rosemary Radford Ruether closes the book with an essay that might well have come at its beginning, since it offers an admirably clear and concise introduction to Althaus-Reid’s conception of indecent theology, and indicates how this affects thinking about Mary, Jesus Christ and God. It may be hard to imagine Ruether talking dirty, but this is what she concludes Marcella has taught us to do if we are to “speak truth” (p. 267). This endorsement, from the doyen of feminist theology, might represent the decentring of Marcella’s indecency, but perhaps in the way that the grit in the oyster produces a pearl.

Gerard Loughlin is Professor of Theology at Durham University, UK. He is the editor of Queer Theology: Rethinking the Western Body (Wiley-Blackwell 2007) and co-editor of the journal, Theology & Sexuality (Equinox). 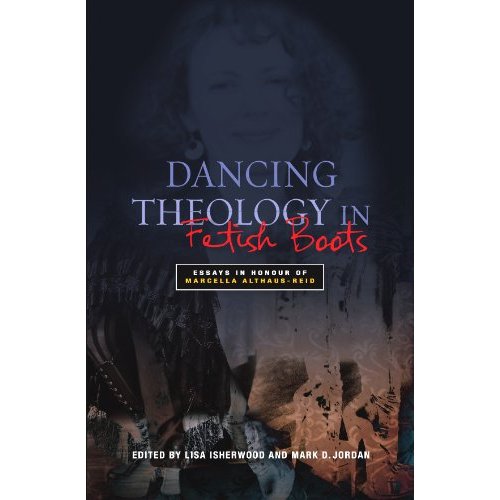