In jeans and t-shirt I stand

Through past and future.

Just like a doll with a spring, I can

See all around myself,

Although my vision stops

Where the seven seas end.

The Thames becomes my target, the

Sleeps the Statue of Liberty

When I have to go

And take the mirror to reflect

I wait with my cell phone, with

Plugs in my ears

I stand out of the map

That engulfs my yard,

Then the maps grow up

And covers the whole world.

And beyondness is the hope

My t-shirt becomes a map

When I chat and net

A lighthouse I become,

That looks towards the west

But stands as if mum. 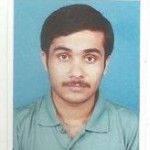 Born on 2nd Dec. 1989. After completing basic education graduated with English hons. Then M.A in English (first class) from Calcutta University. Interested in creative writing from adolescence. Trained in recitation (district champion) and elocution. Own the first prize in all Bengal poem writing competition organized by Paschimbanga Bangla Academy (W.B, India). Interested in postcolonial studies, Indian writing in English etc. At present working as an assistant teacher at a school.