“Out of Place” – An underground poet helps us think about community.

To learn more about the work of Tyrone Williams please read this wonderful article. 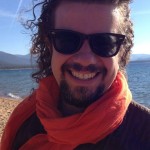