Off the Menu: Asian and Asian North American Women’s Religion & Theology is a collection of essays by different authors demonstrating the significance of the Asian and Asian North American women’s voice in Christian theology, as well as displaying unique ways of engaging Christianity in light of gender, culture, heritage, and history. Food and cooking imagery is used throughout the volume in various ways, representing the traditions and cultures passed down which are integral to the identity of Asian and Asian North American women. Moreover, through metaphors such as experimentation in cooking and developing new dishes, the food and cooking imagery also represents the freedom to integrate different cultural contexts to form new identities and perspectives.

Off the Menu is divided into four sections. Section one, entitled “History and Identity”, contain essays that provide a context to describe the history, origins, and broad scope of theological tradition where Asian and Asian North American women’s theologies and perspectives can be placed. In Nami Kim’s essay “The ‘Indigestible’ Asian: The Unifying Term ‘Asian’ in Theological Discourse,” common categories and terminology are examined with scrutiny – for instance, Kim exposes the inherent racism in such terms such as “Asian,” originally used to describe the “Other” by Western colonizing nations. In particular, this essay seeks to bring to awareness the many challenges in the use of such terms due to societal assumptions and cautions readers to be aware of both the positive and negative impact in the use of such terms. This section also includes Kwok Pui-Lan on transnational feminism in the Asia Pacific and Gale A. Yee’s discussion on Ruth as representative of the plight and oppression of the “model minority.”

Section two, entitled “Reinventing Spiritual Traditions,” contains essays that speak to the challenges and joys of working with traditions passed down from previous generations. In particular, I found Rachel A R. Bundang’s essay, “May You Storm Heaven with Your Prayers: Devotions to Mary and Jesus in Filipino American Catholic Life,” to be surprisingly relevant to my context. I was skeptical at first, never having considered much commonality between my Taiwanese American Protestant background and the Filipino American Catholic background. However, I discovered that despite some minor varying details, the major challenges regarding the generation gap were very similar – proving to be transcultural and transreligious. Other topics in this section included Jane Naomi Iwamura’s embrace of ancestor veneration in a Christian context, as well as Jung Ha Kim’s discussion of the increasing popularity but colonization of non-Western spiritualities.

“Re-orienting We-Self”, the third section, proposes different ways of approaching the task of establishing and making sense of a communal identity with more than one cultural influence. In “Cooking without Recipes: Interstitial Integrity,” Rita Nakashima Brock recaptures the value in having multiple pieces of identity, and proposes to find beauty in the past and the future, the good and the bad, likening it to the different weaves in a tapestry. Other topics in this section include Wonhee Anne Joh’s use of the Asian relational concept of jeong to provide a different framework for responding to injustice, Lai Ling Elizabeth Ngan’s validation of the value in the totality of the Asian American experience including its bitterness, and Anne Dondapati Allen’s honest look at the limits of Christianity to provide liberative messages to challenge the oppressive culture against Indian women.

Finaly, section four entitled “Embodied Agency” demonstrates how Asian North American women’s theologies work themselves out in praxis and activism. Again, a wide variety of subjects were presented — Greer Anne Wenh-In Ng’s discussion of how Asian Canadian women can relate to Native Canadian women, Nantawan Boonprasat Lewis on sex trafficking and religious factors that allow for injustice, Wan-Li Ho’s description of the interreligious dialogue achieved among Taiwanese women in environmentalism, Seung Ai Yang on Jesus’ original intent in his sayings on divorce, Rose Wu’s push for the inclusivity of sexual minorities in the Christian community, and Boyung Lee’s take on the uniqueness of the pedagogy of Asian and Asian North American women.

Off the Menu provides a good introduction to what Asian and Asian North American women’s perspectives have to offer to the wider pool, expanding and challenging the idea of what those theologies might or could include, and presents a diversity of voices – at once, demonstrating that the category cannot be pigeon-holed into a narrow set of experiences and perspectives, but also showing that amidst such vast diversity, there are repeating themes that emerge and are characteristic of such perspectives. Alas, while Off the Menu adequately shows a diversity of writing and scholarship styles, experiences, cultures, etc., at times the reading feels rather disjointed, like a random sampling of essays only loosely organized around the common themes of recipes and cooking. With vastly varying subjects from the many different cultural contexts (perhaps in an attempt to be inclusive), the diversity presents a challenge for readers to find coherence in the entirety of the book. 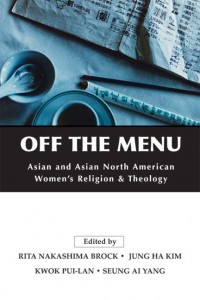 About the Author: Joy Lentz Wong