What is knowledge activism? 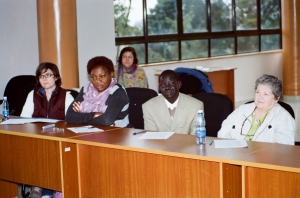 Postcolonial Networks has brought together the words “knowledge” and “activism” to inspire the knowledge activism movement. Knowledge activism disrupts colonial systems of knowledge production that sanitize narrative according to a universalized set of values and standards, set by a few, for all. By changing the way knowledge is cultivated, produced, and distributed, we actively challenge hegemonic norms that cause injustices for authors and readers by extension.

We invite readers to adapt their reading lens.

Due to the remnants of colonial systems of knowledge production, scholarly readers have been trained to expect a specific style of English in the written form. Copy editors at many academic presses routinely correct authors when their use of a word appears to the editor as an “awkward” construction. These routine corrections, which authors may not know or to which they are compelled to submit, often result in the erasure of the author’s indigenous voice and his or her contextually-informed usage of words and meanings. In this way, the publisher, through its copy editors and even peer reviewers, can dominate and subordinate the author’s editorial choices. When this happens, it is not the authors’ scholarship being judged; rather their particular expression of scholarship is under scrutiny.

Efforts to conform manuscripts to a “universal” standard are sometimes not about understandability. Sometimes these efforts play into a larger system that forces Majority World authors into unnatural choices to appease the publisher’s perception of the desires of North American and European academic readers. Commonly, readers in North America and Europe have a great deal of tolerance for fellow western scholars who write lengthy, obtuse sentences. Complex rhetorical constructions are the gold standard of “scholarly” discourse, lauded as excellent and erudite. Much less tolerance, if any, is granted to Majority World authors, both native and non-native speakers of English, who write with understandability, as used in their home context, but in a style that is “other.” Similarly, localized sources of knowledge, such as oral traditions and narrative, are typically not revered with the same gravitas as “high” colonial sources of knowledge.

Natural multiplicity of scholarly expression ought to reflect the global diversity of thought and arguments, but this variety is regularly smoothed by notions of “professional” uniformity. Difficult questions, such as who determines these standards, and why those particular individuals get to choose, often remain unasked.

The destabilizing impact of our knowledge activism efforts will not be welcomed in all corridors of the academy. However, we find among many networks a growing desire to think and write in ways that engage multiplicity. Authors, peer reviewers, copy editors, publishers, and readers must all join together as a decolonizing community that relentlessly pursues rigor for scholarship’s sake, not for the favor of a singular and arguably flat style of expression. In the meantime, Postcolonial Networks will continue to learn from authors and readers alike the balance between scholarly rigor and diversity of expression, in ways that continue to expand our understandings of human thought and experience.