Polydoxy is a compilation of essays brought together by editors, Catherine Keller and Laurel C. Schneider, to explore the results of postcolonial/poststructuralist/postmodernisms and process thinking on contemporary Christian theology. Their goal, explained in the introduction, is to bring new life to Christian theology and Christian faith by opening up previously closed doctrines to the vitality that multiplicities and pluralisms bring. They are clear that the intent of this new way of doing theology, which they title “polydoxy,” is not to do away with the Christian tradition of the past, but to dismantle orthodoxy’s claim to authority, based on uniformity of belief, by unveiling the ways in which Christian tradition contains here-to-fore unseen polydox insights. This review will be a summary, rather than critique, of the volume.

Polydoxy, as defined by Keller and Schneider, is built on the three interrelated concepts of multiplicity (the idea that the cosmos is necessarily made up of diversity and plurality), unknowing (building on the tradition of apophatic theology, the recognition that the infinite depth of diversity makes complete knowing impossible), and relationality (the understanding that interrelatedness is what holds multiplicities accountable and prevents polydoxy from becoming a new orthodoxy). Thus, the volume is arranged in three sections, with each chapter building on its section.

Part I: Multiplicity opens with Schneider’s piece. On the premise that creation comes from multiplicity and mixing, rather than purity and singularity, Schneider exposes and belies orthodoxy’s claim to purity through humor- and trickster-based hermeneutics that perceives more than one angle to reality, as evidenced in the gospel narratives.

Next, Roland Faber argues that the goal of polydoxy is to open orthodoxy by employing the experiences of multiplicity that, while sometimes incorporating the abstractions within orthodoxy, are ultimately dynamic, incomplete, open-ended and indeterminate, due to their mutual and interrelated natures. This mutuality-based, open-endedness is constitutively peaceful, making it preferable to the violence that often accompanies orthodoxy.

Sharon Betcher applies polydox methodology by proposing a corporeal pneumatology, embodied in ourselves and our neighbors through obligation, com-passion, and servanthood, as a way of overcoming the fragmentary, psychosocial disintegration that urban living brings.

Keller’s essay examines the work of Lady Anne Conway, a seventeenth century writer, unveiling an anticipation of polydox methodology in Conway’s reflections on creation, embodiment, mutuality, and the passibility of God. Of all the thought-provoking chapters in this book, Keller’s stands apart as the most in-depth reflection on the possibilities and ambiguities of polydoxy, something to be expected given her long involvement and leadership in this field.

Part II: The unknown begins with Mary-Jane Rubenstein’s deconstruction of Augustine’s record of his faith journey in tandem with his relationships to friends, family, and God, demonstrating that Augustine is unknowingly enmeshed in relationality, despite his claims to holy independence.

Hyo-Dong Lee seeks to understand the Neo-Confucian relationships between substance and function, or principle and psychophysical energy (a type of praxis), in order to apply them to the pluralism and singular unity of the Trinitarian Spirit.

Next, Colleen Hartung attempts a Derridean deconstruction of faith in a time of crisis, narrating a faith that relies on uncertainty, and therefore on openness and unforeseen possibilities, to provide faith even in the uncertainty of God. While Hartung’s resistance to naming the object of faith raises questions about whether her work could be considered Christian polydox theology, one of the stated goals of the volume’s introduction, and whether she is writing about faith or about hope, her use of personal narrative as a structure for theological method highlights the inseparable relationality between a scholar’s public work and private life.

Part III: Relationality begins with Mayra Rivera’s exploration of the ambiguity of “glory (dox/a)” in the service of (post)colonial history. Reclaiming glory in the name of the sufferers of colonial injustice, Rivera argues that God’s glory is seen not in quests for gold, but only in embodiment and flesh and the incomplete knowability of materiality.

Monica A. Coleman emphasizes a highly contextual postmodern womanist soteriology, in order to speak of the multiples of incarnations and Saviors, in an attempt to move salvation beyond the boundaries of Christian exclusivity.

Brianne Donaldson argues for the interrelatedness of Jainism, ecofeminism and Whitehead’s abstract process metaphysics, in order to extend engagement with the world to include care for non-humans and even non-animals.

Marion Grau’s examines the boundary-crossing, religious and ethnic hybrid identities of the Colenso missionary family of the 19th century as a case study for Christian mission that puts relationality at its core, inviting vulnerability and permeability from missionaries in ways that bring about the salvation of not only the missionized but the missionizing as well.

Lastly, John Thatamanil brings together comparative religion and Trinitarian theology as he formulates an understanding of the trinitarian God that brings together the Hindu concept of being, the Christian concept of contingency of being, and the Buddhist concept of relation to argue for the multiplurality and simultaneous unity (though not uniformity) of God.

The most important contribution of this volume is that it explicitly demonstrates the various methodologies used by theologians of polydoxy. Almost every scholar clearly lays out the way in which they define and apply polydoxy to their work, making the book invaluable for those desiring methodological tips. That there are different definitions and methodologies only strengthens the editors’ claim that multiple theologies are necessary for the survival of Christian theology in general. Equally as important, Polydoxy demonstrates that there are no theological loci to which these methodologies cannot be applied, with chapters covering topics from pneumatology to soteriology to missiology, to chapters on the Trinity, incarnation, and glory, and from patristics to comparative theology. Thus, both methods and applications serve to highlight the various paths that other polydox theologians might take, pointing to the open-ended nature of the work.

Polydoxy is a well-edited volume, the chapters clearly contributing to the over-arching theme laid out by the editors in the introduction. As a whole, it brings clarity to this new way of doing theology by giving explicit definitions and methodologies. For the scholar already practicing this theology, or for those interested in what polydox theology is about, this is strongly recommended reading, and worth buying (alas not yet in ebook format although selections are available on Google Books). It also functions as a collection of stand-alone essays, for incorporation into a class on contemporary theology. Several of the chapters give good explanations of process theory (Coleman, Donaldson), and comparative theology (Lee, Thatamanil); nonetheless, most of the writers presuppose knowledge of deconstructuralist and poststructuralist philosophers like Derrida, Deleuze, and Nancy, making certain chapters a challenge for students who have not yet been introduced to these theories. Finally, it is important to note that, despite the use of non-Western “modes of reasoning” (Schneider), all of the authors are currently situated within North-American academic institutions. Perhaps a future volume might demonstrate increased multiplicity and relationality by soliciting contributions from those outside the North American academy. Nevertheless, Polydoxy is an important volume that will serve as a foundational collection in the years to come, giving new life to the praxis of theology. 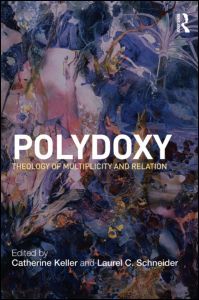 About the Author: Kayko Driedger Hesslein