Presidential Election Time: Disenfranchising the Margins in a Democratic Moment

Presidential Election Time: Disenfranchising the Margins in a Democratic Moment

“The ravages of Hurricane Sandy brought this to the fore. Could a national election be put on hold to ensure the participation of millions of civilians impacted? The politically agile did jump on the occasion to cash-in on this. Even Governor Chris Christie of New Jersey, who tends to be outspoken, should have given more thought to his responses to the storm’s impact on the election before a crass rejoinder that makes his sentiments clear—Why would I care about an election now? It seems to be part of the American spirit to assume that showing a strong face is what the nation needs at all times, even during times of calamity. The voting gap—the poor, the working poor, citizens of color, and the elderly—often face difficulties in making it to the polls. They are not represented by the candidates; they appear not in national debates, and yet, they are a significant part of the fabric of our society. If we were to embrace the view that our moral character as a nation shows itself in how we make it possible for the most vulnerable to fully participate in our national life, we would come face to face with the startling realization that we have missed a step.” 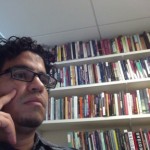 Dr. Elias Ortega-Aponte is an Afro-Latino scholar whose areas of expertise are cultural sociology, religious ethics, social movements, and bioethics. He received his Ph.D. in Religious Social Ethics from Princeton Theological Seminary and now serves as Assistant Professor of Afro-Latinos/as Religions and Cultural Studies at Drew University Theological School in Madison, NJ. Dr. Ortega-Aponte approaches teaching from a transdisciplinary perspective that is committed to social justice and to the celebration of the creativity, genius, and fighting spirit of communities of color. His primary research interest is the study of how the intersections of race, religion, and experiences of inequalities lead communities of color to find ways to engage the challenges of urban poverty, incarceration, access to education, and adequate health care.