The Problem of Representation

The Problem of Representation

Our culture is a visual culture. Everywhere one looks, there are images and signs that seek and grab our attention. Studying the ways cultures hierarchically order the senses, cultural historian Walter Ong argues that for the West, visuality predominates all other senses. In the West, visuality is the primary mode in which we understand the world. (This explains why anthropologists, in interpreting culture, undertake the methodology of participant-observation.) As Ong points out, the taxonomic imagination in the West is strongly visualist and has the tendency to constitute cultures as if they were “theaters of memory.”

Edward Said speaks of a similar process. In imagining the Orient, the West “reconverted, restructured from the bundle of fragments brought back piecemeal by explorers, expeditions, commissions, armies, and merchants into lexicographical, bibliographical, departmentalized, and textualized” representations of the Orient. The Orient’s multiple and divergent stories are fabricated as a singular body of signs that can then be read by the West. Such a process of representing the Orient “is a theatrical one: the Orient is the stage on which the whole East is confined. On this stage will appear figures whose role it is to represent the large whole from which they emanate” (Orientalism, 1978).

The above image, taken from a magazine, advertises “the luxury of being yourself.” The advertisement comes from Conrad Hotels, an international luxury hotel chain owned and operated by Hilton Worldwide. The image depicts two Western tourists eating in an outdoor restaurant in Asia. What are we to make of this representation of the East (and the West)? What are we to make of the juxtaposition between the Orient and the Occident? And what can we, as activists, scholars, and global citizens, do to correct the way our culture represents others? This is a conversation we ask you to participate in. 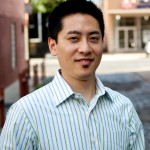 Steve Hu is a Ph.D. student in the Department of Religious Studies at the University of California Santa Barbara. Prior to beginning doctoral studies, he was a minister at a large Asian American church in New Jersey. He has also worked as a research assistant at the Columbia Journalism Review, the magazine of Columbia University’s Graduate School of Journalism. His research interests center on Chinese popular religion, Christianity in China, and religious uses of mass media.