Gurminder Bhambra’s award winning book, Rethink Modernity: Postcolonialism and the Sociological Imagination, proves itself fully worthy of such distinction. From the perspective of postcolonial theory, the book takes issue with the ‘facts’ of European modernity and the scholarly understanding of the European ‘ownership’ of modernity as an originary project. Bhambra recognizes that ubiquitous within social scientific inquiry is the continual privileging of Europe and the West as the sole ‘maker’ of modernity. In her words, “the story is never about the peasant” (25).

With introduction and conclusion, the book divides its six major chapters equally under the following two major section titles: 1) Sociology and Its Historiography and 2) Deconstruction Eurocentrism: Connected Histories. Indeed, the ‘Notes’ and ‘Reference’ sections should also prove valuable to the volume’s general readership.

Although Bhambra employs a postcolonial optic to deconstruct and reconstruct dominant ideas of modernity, she makes readers aware in her introduction that postcolonial scholarship often remains complicit in the privileging of Europe as the ultimate reference point, “albeit a negative one” (1). Central to Bhambra’s postcolonial critique of modernity is the understanding “that the way in which we understand the past has implications for the social theories we develop to deal with situations we live in today” (11).

In chapter 1 Bhambra briefly discusses the politics of knowledge production, and, importantly, acknowledging colonialism as part of the scene of dominant social scientific inquiry. For Bhambra, the colonial encounter, which involved conquest, domination, and enslavement of peoples and forms of life, is “constitutive of the very disciplines that express or seek to understand modernity” (16). With theoretical poise, Bhambra posits that colonialism was intrinsic to the contemporary scene in which dominant forms of inquiry were found and yet the colonial encounter is rendered unseen. Hence it remains, for Bhambra, imperative to deconstruct these forms of inquiry that elaborated universal criteria on the basis of marginalizing and silencing other experiences and voices. Borrowing from historian Sanjay Subrahmanyam (1997), Bhambra proposes the concept of ‘connected histories’ as a viable approach to deconstructing dominant narratives at the same time rendering visible the constituted ‘other.’

Chapter 2 concerns sociology’s explanation of modernity. Among the modernist ideas underpinning early social scientific theory (Ferguson, Smith, Montesquieu, and Turgot) were the stadial accounts of history and intrinsic Eurocentrism. As Bhambra points out, directional interpretation of historical progression did not escape the evaluative bias of the West as occupying the apex of social development and progress. This understanding of the process of modernization, becomes, for Bhambra, “a background assumption of the social sciences and is unquestioningly reproduced in subsequent theoretical and substantive initiatives” (45).

Chapter 3 examines the early premise of modernization theory that the total social process constitutes a universalizing pattern. Implicit in this theory was the view that modernity naturally evolved towards Western ways. As Bhambra argues, “modernity is frequently identified as a feature of the West that is exported and has an impact on other societies, which then incorporate the institutional forms while adapting them within local conditions and cultures” (58). In finding remedy to the assumptions of linearity and convergence of earlier modernization theory, Bhambra turns her attention to the construction of a comparative sociology of ‘multiple modernities’. Although this approach accounts for cultural diversity in the expression of modern institutions, it does so at the same time as establishing the West as the origin of multiple modernities (67). For Bhambra, the solution consists of “de-linking our understanding of the socio-historic processes from a European trajectory and focusing on not only the different sources and roots, but also on the ways these interacted and intersected over time would provide us with a richer understanding of the complexities of the world in which we live and the historical processes the constitute it” (76).

Chapter 4 examines dominant discourse of the Renaissance. Bhambra contends that the prevailing interpretation of the Renaissance “as being the crucible for the emergence of the ‘cultural codes’ of modernity as well as being the fundamental period of transition to the modern world” is no longer sustainable and must be effectively challenged (84). In contesting “the iconic status of the Renaissance”, Bhambra seeks to challenge and reconfigure the dominant discourse of the Renaissance, and thus, of the idea of ‘modern Europe.’ Bhambra argues strongly that the problem has been that the qualitative effects (i.e. discovery, Humanism, art, the printing press) leading to the Renaissance as the birth-hour of modern Europe have been seen in isolation. Furthermore, they are abstracted from wider interconnections and regarded as a process occurring due to internal developments in the superior mindsets of the Europeans themselves (97). In addressing the Renaissance, Bhambra demonstrates how a dominant understanding, established in the nineteenth century, set the cultural parameters of what was understood to be modern and European, which, in turn, was osmotically accepted by various social science disciplines. It is this acceptance that Bhambra challenges, proposing instead a rewriting of the Renaissance as a shared East/West undertaking and wherein the constituted ‘other’ is fully recognized (105).

In chapter 5 the history of the French Revolution as a story of the origins of the modern world is brought in question. Bhambra disagrees vehemently with the dominant theory that modern institutions of the nation-state emerged in Europe in the aftermath of the French Revolution and then became global over time. Furthermore, this process, as Bhambra rightly argues, is “understood in terms which conflate colonialism with modernizing processes such that the emergence of nations states in non-European parts of the world are seen to be part of a ‘natural’ progression of world history” (116). Bhambra reiterates that the colonial question needs to be considered as integral to the development of the nation-state not just outside of Europe, but within Europe as well. For as the nation-state emerged as a colonial state “the writing out of the colonial relationship from understandings of its emergence impoverishes our analyses of it” (117).

Chapter 6 analyzes the association of the Industrial Revolution with Europe and discusses the relationship of industrialization with capitalism. In classic retellings, as Bhambra purports, the industrial revolution remains “as a fundamental touchstone of both economic historians and those who wish to place Europe at the center of analyses of global economic change” (127). It remains clear for Bhambra that in the histories claiming industrial capitalism as a European derived idea and then diffused outwards write out the interchange of ideas and commodities with other countries (i.e. chattel slavery). She argues that the world beyond Europe also contributed substantially in material terms to the commercial growth which stimulated the development of the West. Indeed, Europe’s economic dominance was “largely due to the manner in which areas, such as Africa, Latin America, and India, were de-industrialized and deliberately underdeveloped in order to ensure market supremacy for British and European commodities” (139).

In her conclusion, which is titled, “Sociology and Social Theory After Postcolonialism—Towards a Connected Historiography,” Bhambra re-emphasizes the failure of social scientific theory to consider the histories of imperialism, colonialism, and slavery that enabled Europe, and the West, to achieve ‘supremacy’ (146). Hence, for Bhambra, the postcolonial objective consists of recognizing and deconstructing and then reconstructing the scholarly positions that privilege the West without and recognition of the lives (slavery) that have contributed to West becoming privileged. This is done through connected histories as an alternative way of thinking about history and sociology. In the end, this approach compels us to re-think “our current circumstances and the trajectories of change associated with them from multiple perspectives rather than a dominant European one” (153).

For those who value postcolonial scholarship, this work is a necessary read. It succeeds in bringing to the fore the critical issues underpinning various social scientific disciplines, particularly sociology and history. (I would also add theology, religious studies, and biblical studies.) Bhambra successfully addresses histories of modernity that are associated with the construction and subordination of ‘others’. The book reveals Empire’s abiding impact on the concept of modernity, which, as Bhambra argues, has been rendered impalpable to later generations due to its thorough absorption. There are some parts of Bhambra’s analysis that readers may want to dispute, particularly her understanding of Spanish national identity. Yet, her central point remains, at least for me, thoroughly intact, “the ways in which we understand the past have implications for the social theories we develop to deal with the situations we live in today” (104). 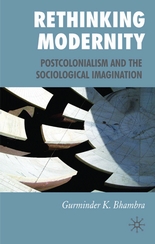 About the Author: Gregory Lee Cuellar