In Our Own Voices, edited by Benjamin Valentín, brings together a stellar group of U.S. theologians, both Protestant and Roman Catholic, to reflect on, reassess, and reformulate Christian themes and doctrines from a distinctively Latino/a theological perspective. Engaging biblical texts, Christian and non-Christian traditions, contemporary formulations of doctrines, as well as cultural and theoretical resources, In our Own Voices “seeks to contribute to the discussion of key theological concepts and doctrines within Latino/a theology specifically and in the field of theology more generally” (p. xiii). Six areas of theological reflection are addressed: the doctrines and symbols of God, creation, theological anthropology, Christology, ecclesiology, and eschatology.

Valentín points out that U.S. Latino/a theology “has burst forth with all sorts of important interpretive innovations in the last thirty years or so” (p. xi). These “influential theological innovations” (Segovia, 1996, p. 19) are readily attested to in systematic and constructive theology, biblical studies, feminist theologies and ethics, pastoral theology, and social ethics. These innovations include theological appropriations and critiques of the concept of mestizaje (i.e., racial and cultural hybridity); an understanding of popular religion as a source for Latino/a theology; an emphasis on the epistemological and hermeneutical importance of lo cotidiano (i.e. daily lived reality); the development of a collaborative model of theology (teologia en conjunto); the use of postcolonial theory in biblical and theological studies, and many more.

Valentín is concerned, however, that this list of accomplishments offers little evidence of a sustained and persistent interest in the study of classical theological loci, or in the analysis of Latino/a theology’s recent handling of them (p. xii). Though there have been studies devoted to particular doctrines (e.g., Christology and theological anthropology), Valentín notes the lack of “formal, systematic, and reconstructive” analyses of key Christian symbols and themes (p. xii). He makes clear that Latino/a theologians have undertaken serious analysis of theological doctrines, but suggests “that we [U.S. Latino/a theologians] can add to our ingenuity by exploring the possible meanings and applicability of the different Christian symbols, concepts, and doctrines more often and in a more methodical and intentional manner” (p. xii, emphasis mine).

The impetus for this book, then, lies in Valentín’s initiative to respond to what he deems the reasonable and sound request for “a greater level of theological reflection on matters of doctrine or on the configurations of classical theological themes within Latino/a theology” (p. xiii). Interpreting, scrutinizing, and reformulating are important tasks that Valentín takes to be integral to understanding the potential meanings of theological doctrines. Indeed, he thinks it behooves Latino/a theologians to engage in this type of effort and continue adding to the Latino/a doctrinal corpus. Toward this end, he enlists a diverse group of Latino/a theologians to critically examine, evaluate, and elaborate on some of the main theological loci.

While not ignoring their Western European, North American, Central and South American counterparts, the authors nevertheless speak in their own voices. This is in keeping with Latino/a theology’s early insistence that, as articulated by Orlando O. Espín, “‘we are we’ and therefore ‘we are not they’” (2005, p. 100). Distinctly Latino/a sources and categories are privileged in their approaches to and analyses of key Christian doctrines. No longer silent strangers, Latinos/as have discovered their distinctive theological voices, and have employed them in the academy for several decades. This volume represents further evidence of the maturity, creativity, and vibrancy of U.S. Latino/a theological voices. The authors represent diverse approaches, perspectives, religious and cultural backgrounds. This diversity is not a difficulty to be overcome in the name of unity; rather, it is a fact to be celebrated and embraced.

Beginning with the doctrine of God, Luis N. Rivera-Pagán offers a clear and concise analysis of the social-historical context for the emergence of liberation theologies, which “brought to the conversation not only a new theme—liberation—but also a new perspective on doing theology and a novel way of referring to God’s being and action in history” (p.1). He points to a “vigorous reawakening of liberation theology” (p. 14-15) in the face of current forces of oppression, marginalization, and violence. The next two essays take up the theme of creation. Jeanette Rodriguez elaborates what she calls “La Tierra Theologies” (i.e., a theology of and for the earth), drawing on biblical writings, Catholic tradition, Hispanic/ Latino(a) cultural resources, familial religio-cultural sources, and voices of Latin American religio-cultural ancestors (p. 21). She emphasizes the interconnectedness between people and land, the dignity of both creation and creature, and advocates for justice for the earth and all its inhabitants.

Carmen Nanko-Fernádez’s essay is one that merits particular attention given her explicit, critical and constructive use of postcolonial theory. Nanko-Fernández’s essay takes into account the daily reality of hybridity that Latinos/as experience in urban spaces and places. Theirs is a reality “marked by fluidity in languages, traditions, migrations, cultures, identities, and even in the ethnic and racial constitution of families” (p. 44). Her essay employs a “postcolonial lens with a cosmo-politan optic” attending to the “intersections of cosmos and city” (p. 44). Analyzing a text from Genesis 1 that has been influential on the reflections of Latino/a theologians’ understandings of creation, she goes on to critically evaluate the proposals of three Latino/a theologians with regards to creation, and finally puts forth her own proposal.

Nanko-Fernández’s “cosmo-politan” perspective attends to the intersecting relations between cosmos and metropolis, a space where peoples and cultures negotiate new ways of living together. This is a space that may result in “voice and visibility to a whole series of social, ethnic, cultural, and sexual persons and sectors that are usually deprived of any voice or image, and that are never represented on maps or in tourist guides” (Cortés, 2008, p. 10, cited in Valentín, p. 44). Further, this is a space that takes seriously the relation between creation, eschatology, and ethics (p. 59).

Michelle A. González’s essay centers on theological anthropology. González offers an overview of Augustine, Aquinas, and Rahner, and surveys contemporary Latino/a thinking related to anthropological matters. Drawing from, and expanding on, historical and contemporary voices, she elaborates a theological anthropology that takes the concrete faith and lives of Latino/a communities seriously. She highlights four themes particular to a Latino/a anthropology: mestizaje/mulatez (plurality and difference); community/family; relationships; and grace and culture (p. 71). She further adds the dimension of race in relation to our notions of the human—an area awaiting further development by Latino/a scholars. Rubén Rosario-Rodríguez (2008) is a Latino theologian who has explicitly engaged race from a Latino/a perspective.

Benjamin Valentín’s and Michael E. Lee’s essays reflect on Latino/a Christology. Valentín evaluates the Christological articulations of three Latino/a theologians, highlighting their contributions and engaging in a constructive critique. He discerns three Christological patterns in the works examined: an inclination toward a Christology from below, a “penchant for a high Christology,” and an espousal of a liberationist Christology (p. 107-108). Lee’s essay reflects on the “Christ-word” put forth by Latino/a theologians (p.113). Lee summarizes three important insights—an openness to new voices, an emphasis on the life and ministry of Jesus, and reflections on discipleship—that “signal key changes in how Christology must be done in the future” (p. 115-117). Lee goes on to note three main contributions to Christology from a Latino/a perspective: the aesthetic, cultural, and prophetic dimensions. Lee suggests that younger generations of Latinos/as can take the Christ-word uttered by a previous generation and proclaim it in new ways—ways that give heed to and empower the voices of the oppressed and marginalized, and challenge elite voices to a kenosis of privilege and power.

The essays by Roberto S. Goizueta and Harold J. Recinos address ecclesiology. Goizueta  suggests that, “when undertaken from the perspective of contemporary U.S. Latino/a experience and theologies emerging from that experience, a critical retrieval of Catholic ecclesiology will highlight particular aspects of the notion of the church that can be liberating and countercultural vis-à-vis both the larger church and society” (p. 133). Goizueta critically retrieves and concretizes different ecclesiological models, making them more amenable to the experiences and contexts of U.S. Latinos/as. The result is an ecclesiology that emphasizes communion, sacrament, people (i.e., “people of God,” and “the crucified people”), and the multi-discursive, borderland nature of the church (p. 140). Recinos explores the identities and mission of mainline Protestant churches, arguing that these churches “can find God in the details of hip-hop culture, which is a public site of learning that provides a voice to voiceless youth—a voice that offers renewal for Christian experience” (p. 156). Recinos challenges a mentality present in some sectors of society and the church that is pessimistic and dismissive of the contributions that urban youth can make to church and society. He emphasizes that hip-hop, and rap in particular, “is something good from the barrios and slums, stories about life experiences, perspectives with which to renew church and ministry” (p. 164).

Finally (no pun intended), Ada Maria Isasi-Díaz discusses the subject of eschatology, inquiring into the biblical metaphor of the “kingdom of God.” She notes the transformations this metaphor has undergone, and how to it “endorses understandings that counter the values that can be ascertained from the Gospels” (p. 172). The misuse of the metaphor “kingdom of God” leads Isasi-Díaz to introduce a new metaphor, “kin-dom of God,” from a specifically mujerista (i.e., womanist) perspective. Kin-dom of God opens “new vistas as to how to live the Gospel message of justice and peace in our world in the twenty-first century,” resonates with the importance of family in Latino/a cultures, and promotes mutuality and equality of relationships (p. 186).

Two observations are in order. First, had the book offered two essays for each doctrine analyzed, there would have been a greater diversity of perspectives. Second, given Valentín’s concern about the scarcity of doctrinal analyses within Latino/a theology, the absence of essays on pneumatology and soteriology represent a notable omission. The work of Samuel Solivan (1998) has been crucial in articulating a pneumatology from a Hispanic Pentecostal perspective; yet, there remains further work to be done engaging pneumatology from broader denominational and dialogical perspectives. The recent work of Michael E. Lee (2009), and Nancy Pineda-Madrid (2011), are major contributions to the development of soteriology from Latino/a perspectives.

In Our Own Voices is a critical, creative, and constructive contribution to contemporary theology, and more specifically to Latino/a theology, and should be required reading for courses in theology. The book also furthers ecumenical and collaborative efforts taking place among Protestant and Roman Catholic Latino/a theologians (see Espín, 2009). The essays demonstrate a common commitment to “inquire into the contours and meanings of classical Christian themes and doctrine,” and a unity in the belief that Latinos/as “have made and can continue to make a great contribution to the field of theology” (p. xvi-vii). The editor and the publisher are to be commended for putting forth such a fine volume. 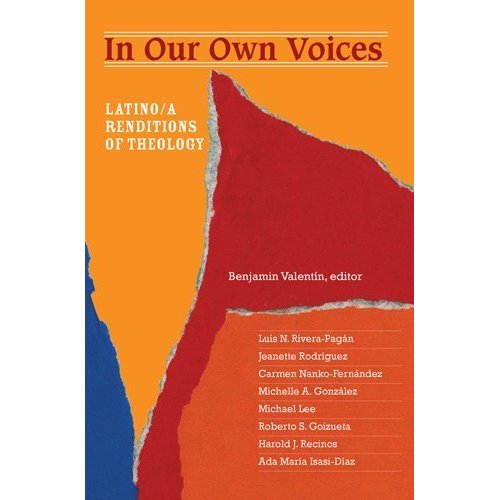