As postcolonial reasoning enters the edifice of mainstream English-speaking theological inquiry inch by inch, the disciplines of biblical scholarship and even systematic theology are developing a habit of tolerance and perhaps even mild interest toward postcolonial critiques. University and seminary syllabi are gradually exhibiting the willingness of theology instructors to include a sampling of postcolonial theological texts, at least among those segments of the discipline that operate according to a broadly defined “hermeneutics of suspicion.”

In this context, Christian Worship: Postcolonial Perspectives by Jagessar and Burns will serve as a welcome and indeed trailblazing text for scholars, liturgists, pastors, theological educators and students. The long overdue collection of essays will not leave its readers apathetic. Some will sing the praises of Jagessar and Burns’ feisty postcolonial interrogations with impatient excitement while others will be irritated deeply enough to ponder over the impact of postcolonial challenge as its critical trajectories reach into one liturgical sanctuary after another. This slim volume packs a punch that ripples through the most beloved loci of liturgical theologies and histories—sacramental rites, texts, theories, hymns, prayers, vestments and gestures—and their ongoing lack of engagement with postcolonial critiques.

The authors are two English-speaking theologians currently living in diaspora: Burns is a British liturgical theologian working in Australia and Jagessar is a Caribbean theologian from Guyana currently working in the UK. Emphasizing the formative and critical role of context, the authors open the volume not only with a critical reflection on Emmanuel Garibay’s visual meditation on the colonial conquest “The Arrival” that grotesquely and forebodingly graces the cover of the book, but also with extended autobiographical ruminations incorporated in the opening chapter on postcolonial theological method. The authors’ objective is to survey “the terrain of liturgical theology through sustained postcolonial optics” (3) and to promote rigorous, reciprocal, and critical “conversation” as a postcolonial epistemological habit (4) that scrutinizes “liturgical texts for their imperial and colonial influences” (36) while also producing “reconstructive reading” (36) of the Western liturgical discourse.

The book consists of four parts and a concluding reflection. Part I presents the overview of Jagessar and Burns’ vision of theological method—the “postcolonial optics” (Chapter 1) in conversation with Gordon Lathrop’s notion of “critical classicism” and its ethical viability in postcolonial milieu (13) while briefly reviewing blind spots in the current Anglo-produced liturgical theology in North America and the UK.

Part II is comprised of critical reflections on the use of liturgical language in rites of Christian worship (Chapter 2) and the routine use of music and hymns in worship vis-à-vis the unexamined imperial and Euro/Americo-centric agenda that church music continues to inculcate (Chapter 3). Chapter 2, which originally appeared in article format in Worship (2006) and Black Theology (2007) offers an incisive critique of the popular liturgical concept of “inculturation” and its imperialistic limitations when it is understood and deployed as the “appropriation of the cultural practices of marginalized groups into the practices of a dominant group” (35). The problematic use of time-honored liturgical metaphors as “light” versus “darkness” is examined in the context of Women’s Day of Prayer liturgies with a nuanced attention to the complex circumstances of its composition in the post-communist Poland. The use of negative metaphors such as “Egypt” and “blindness” is examined in conversation with feminist liturgical criticism (Gail Ramshaw, Janet Walton) to interrogate the “indefensible symbolic alliances” (47) alongside questions about the impact of the mainstream visual conventions of white/fair altar linens and communion wafers. Additionally, Chapter 3 offers a brief postcolonial analysis of the liturgical “sounding empire” (52) with particular attention to the hymns of Isaac Watts and Charles Wesley “centrality of empire and Christian militarism in a great deal of Christian song” (53). The authors unpack the virtually invisible (for most Western eyes) “connection between hymns, the colonial agenda and empire language” (58). They also examine the recent “multicultural” attempts to co-opt or “highjack” liturgical resources from marginalized cultures as tunes and texts are processed and repackaged by western copyrighted liturgists (62) through a profitable and paternalistic form of liturgical neo-colonialism.

Part III examines the use of scriptural texts in worship, especially the inclusions and exclusions of the Revised Common Lectionary (Chapter 4). The notions that pertain to Lathrop’s liturgical imaginary of critical classicism—the principles of juxtaposition and triangulation—are put into conversation with Edward Said’s notion of postcolonial contrapuntality. Contrapuntality is proposed as a fruitful liturgical strategy precisely when the contrapuntal dimensions suggest a “more confronting mode” to “interject, interrupt, disrupt, upset, and contest” conventional lectionary and canonical sites in worship (77). Any and all selections of biblical texts are value-laden in postcolonial perspectives, the authors argue, and therefore strategic “deviations” are mandated to “open up imperial proclivities” (78) and to curtail the “smothering of subaltern voices” (79). The same interrogative posture is pertinent in the context of a liturgical year that is uncritically geared toward the seasons of the northern hemisphere thus “provoking a considerable sense of dissonance for many in the global south” (80).

Part IV offers a detailed critical analysis of the British liturgical staple—the Festival of Lessons and Carols (Chapter 5). Jagessar and Burns argue it is a fundamentally flawed liturgical practice based on a “misreading of the Hebrew scriptures” and coupled with a hymnody that “amplifies many problematic notions” (89) implicated in the attitudes of British colonial arrogance. The authors cross-reference the Lessons and Carols with Easter Vigil in a contrapuntal manner to illustrate how postcolonially attuned interruption may function as a vigilant liturgical strategy. A eucharistic liturgy by Jagessar is invoked as an example of corrective liturgical practice.

The second chapter in Part IV examines the colonial and imperial images of power and election in the context of baptism and ordination. The critical focus of Jagessar and Burns is trained upon rites that often encourage colonial hegemony through imperialistic appeals to centralizing tradition (e.g. apostolic succession) that advance binaries through “games of insider/outsider, civilized/primitive, savage/noble” (104) among others. Alternative—indeed, corrective—suggestions are proposed to these rites through the postcolonial optic to expose “any link between where power is located, among whom it is invested and whether there is an agenda to keep it located there” (122). In counterpoint to the imperial modes of Christian ritual practice, the authors introduce what Homi Bhabha has described as the subverting role of ambivalence and mimicry to undercut the established and skewed ratios of ecclesiastical power.

Part IV is examines the traditions of ministerial training through the vision for decolonizing theological studies by Musa Dube. Far from being a fad, postcolonial modes of liturgical reasoning and training must address the particular susceptibility of liturgical studies to work “with heavy and inflexible notions of tradition” (129).

The Concluding Observations present a set of methodological questions about the vitality, viability, and sustainability of tradition in Christian liturgical discourses. Indeed the fundamental postcolonial questions—whose traditions and whose orthodoxies—stretch well beyond the field of liturgical theology. As no tradition is ever value free, the last segment of the book forcefully affirms the ethical imperatives of postcolonial agendas that congeal into a methodological coda with applicability within and without liturgical studies—namely, “to interrogate and expose imperial impulses” (132). A postcolonial approach to tradition insists on the rediscovery of potential subversive and emancipatory “‘surpluses’ of multivalent Christian traditions” (136) and resists the appeal to tradition as a “tool to enforce uniformity and the subjugation of minorities to majorities” (135).

Most of the themes touched upon in each chapter merit a book-length exploration in their own right. Some may see this as a flaw that frustrates liturgical punctiliousness. However, the authors have produced a text that serves as an introductory salvo planting postcolonial critiques squarely within the crosshairs of liturgical studies. Traditionally dense postcolonial jargon is presented with expository care and the book introduces not only the ideas of the “holy trinity” of Edward Said, Gayatri Spivak, and Homi Bhabha but also the biblical and theological projects of postcoloniality by R.S. Sugirtharajah, Musa Dube, Kwok Pui-lan and others to liturgical studies. Admittedly, familiarity with the Anglican tradition makes the reading smoother and more rewarding although it should not discourage readers who do not possess it. The critical immersion in the Anglican tradition serves as an invitation for future projects in other traditions of worship to do their own postcolonial spadework.

The greatest merit of the present volume resides in the imaginative, profoundly contextual, and doggedly interrogative sweep as the postcolonial optic is trained on Christian rites, texts, gestures, sounds, and sights. It presents an irresistible appetizer for both old hands and novices in liturgical studies. It seems that the mission of the book is to tease, to challenge, and perhaps to constructively irritate—in other words, to make readers impatient for more, or at least unable to forget one’s vexation. Even if this extremely accessible volume ends up among the exotic florilegia of a bread-and-butter mainline liturgical theology course at the end of a semester, the odds are high that it will change the way how people in the Euro-American theological orbit look at the lectionary, pray in their Sunday liturgies, and sing their favorite hymns. It is suitable for liturgists, pastors, and all those who care about the meaningfulness and ethics of liturgical practice as both spiritual and doctrinal formation. For those outside the theological milieu of postcoloniality where suspicion and reserve toward all things religious, let alone theological, continue to rule the waves, Christian Worship: Postcolonial Perspectives serves as an invitation to take notice of the fecundity of liturgical discourses to become a transformative and interdisciplinary site for “celebrating the subaltern optics” (136).

Kristine Suna-Koro is an assistant professor in theology at Xavier University in Cincinnati, Ohio. 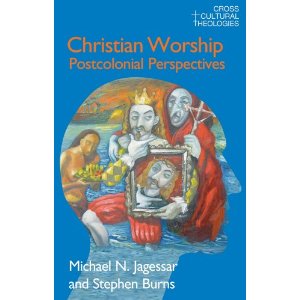