Given the obscurantism that often accompanies postcolonial criticism—as with other theory-dense frameworks—the mental gymnastics required to enter the discourse occasionally proves overwhelming to prospective students. In The Colonized Apostle: Paul through Postcolonial Eyes, editor Christopher Stanley has collected sixteen essays on the apostle Paul with a logical progression to form a less intimidating introduction to the topic. While it is difficult to identify any single thematic or textual strand that runs through all the essays—except perhaps ambivalence to the notion of Christianity’s “pure origins”—this diversity of topic proves conducive to the book’s appeal. The volume is divided into three parts, with subdivisions within its longest section. The first part introduces the reader to key concepts within postcolonial studies. The second adopts various topics or loci within the Pauline corpus for analysis within a postcolonial framework (Acts, in general, plays little role in the volume). The concluding section contains essays that address the history of Pauline interpretation in relation to modern colonial projects. Throughout the volume, the “Paul and Politics” section of the Society of Biblical Literature, the work of Elisabeth Schüssler-Fiorenza, and the editorial work of Richard Horsley loom especially large. Several of the contributors have published monographs on Paul and the Roman Empire, including some in the same Fortress book series, Paul in Critical Contexts.

Stephen D. Moore’s chapter, “Paul after Empire,” provides a useful discussion of the status quaestionis for postcolonialism and Paul, and problematizes the common narrative that depicts Neil Elliott, Dieter Georgi, and Helmut Koester as the first to engage in “empire-attuned” (p. 16) Pauline scholarship. Moore instead argues that the beginnings are far more interdisciplinary than the historical-critical brand of scholarship that Horsley focuses on.

Suasan B. Abraham’s “Critical Perspectives on Postcolonial Theory” is a critical introduction to postcolonial concepts that are employed by later essays in the volume. She is particularly interested in two of its analytic frames: feminism and pedagogy. The increased prominence of postcolonial criticism within the academy, she argues, ultimately compromises its polemical force and political goals, rendering it an institution.

Neil Elliott’s “Marxism and the Postcolonial Study of Paul” notes the dearth of biblical scholarship that positively addresses both Marxism and postcolonialism, despite the overlapping concerns and methods of critique. He concludes by offering a lengthy series of “Marxist challenges” (p. 42) for postcolonial interpreters of Pauline literature.

In the second section, Jeremy Punt’s “Pauline Agency in Postcolonial Perspective,” begins a recurring theme throughout the work, namely the ambivalence Paul held toward the political institutions in his day. Critical of “this world,” Paul does not appear to have a problem with systems of domination, merely those who presently dominate.

Gordon Zerbe’s “The Politics of Paul” goes further and contends that outright contradictions exist between Paul’s various formulations on political institutions of his day, especially those of the “powers.” However, Paul’s apocalyptic worldview leads Zerbe to caution against identifying Romans 13 as the ultimate formulation of Paul’s opinion on the state.

Davina C. Lopez’s “Visualizing Significant Otherness” offers a provocative argument that even ostensibly liberationist biblical readings partake in the social hierarchies they condemn. In order to avoid the more problematic parts of Bhabha’s theory of hybridity (i.e., those most dependent on the linguistic turn), she proposes a greater focus on visual representations of hybridity in antiquity, particularly that of Trajan as the first non-Italian emperor.

L. Ann Jervis’s “Reading Romans 7 in Conversation with Postcolonial Theory” is a departure from the typical postcolonial analyses of the volume and instead employs Bhabha’s notion of hybridity as an analogy to Paul’s discussion of faith in Romans to his Jewish audience. Both men propose a struggle to achieve a “third space” (p. 97) that is not predetermined by colonial context.

Christopher D. Stanley’s “Paul the Ethnic Hybrid?” provides a helpful overview of Bhabha’s idea of hybridity including secondary literature that has elaborated upon or noted its shortcomings. He argues that the concept of hybridity is not as obviously applicable to the apostle Paul as is generally assumed.

Tat-Siong Benny Liew’s “Redressing Bodies at Corinth” addresses the intersection between politics of the body and politics of the empire, observing the loss of status that the Corinthians would have suffered due to conversion to the nascent Christ cult. Liew observes that Paul expends considerable effort in asserting his own masculinity to the congregation, held suspect because of his Asian identity, in the process conflating masculinity with social agency.

Joseph A. Marchal’s “Imperial Intersections and Initial Inquiries” addresses the shared goals of feminist and postcolonial biblical criticism. He draws attention to the methods of Musa Dube and Kwok Pui-lan, and in doing so suggests—like Punt earlier in the volume—that any opposition Paul expresses towards the Roman Empire is primarily because it is Roman and not because it advocates unequal social relations.

Melanie Johnson-DeBaufre and Laura S. Nasrallah’s “Beyond the Heroic Paul” is undoubtedly the most audacious essay in the book, contending that a truly postcolonial perspective on the Pauline epistles would decenter the apostle himself and focus on the manner in which his letters are “embedded in a contested, complex, and shifting context that includes both ancient empire and modern neocolonialism.” (p.167)

Jennifer G. Bird’s “To What End?” also takes up the meta-interpretive method and analyses the manner in which 1 Corinthians 11:2–16 acts as a locus of scholarly imperialism wherein exegetes identify with Paul in order to delimit (and thus control) the authority the apostle granted women in the Corinthian congregation.

Beginning the third section, Robert Paul Seesengood’s “Wrestling with the ‘Macedonian Call’” provides an historical look at how biblical missions and other colonial activities during the nineteenth century found ample justification for their practices through then-dominant readings of Paul.

Brigitte Kahl’s “Galatians and the ‘Orientalism’ of Justification by Faith” contends that Pauline polemic against certain Judaizing opponents has aided colonial agendas by providing convenient categories of faith and works that distinguish Westerners from Eastern colonial subjects. This reading, she contends, is diametrically opposed to the “depolarization of Self and Other” actually found in the epistle to the Galatians (p. 222).

Jae Won Lee’s “Paul, Nation, and Nationalism” draws upon the work of Aijaz Ahmad to argue that “progressive” nationalism and quests for transnational justice are not mutually exclusive (p. 230), as evinced in Korean nationalist language of reunification and Paul’s own desire for the reunification of Israel.

In “Constructions of Paul in Filipino Theology of Struggle,” Gordon Zerbe argues that three ways of addressing Paul predominate in late 20th century liberation theology from the Philippines: overt criticism, disregard, and critical appropriation. This is demonstrated through an overview of numerous Filipino theologians.

Throughout the volume there is a tendency to engage postcolonial criticism first and use Paul as a site for thinking through the challenges that such theories offer, thereby suggesting the book’s subtitle “Paul through Postcolonial Eyes,” is entirely accurate. In terms of its accessibility, breadth, diversity of topics, and generally exegetical focus, it is easy to recommend—including to those not yet acquainted with the academic study of postcolonialism. Any number of essays will interest a given reader, regardless of their political background or theoretical interests. Precisely because so many of the essays were written to provoke, the book’s contents are particularly appropriate for use in a group discussion or seminar setting.

As seems common in biblical studies, there are few deviations from the theories engaged and, while the ideas of postcolonial criticism are relatively new for Pauline scholars, this intense focus on theory occasionally leads the contributors to overlook ample historical data that would aid their constructive enterprise. It is not always clear that the various forms of domination and subservience demonstrated are specifically imperial in terms of origins, assumptions, or articulation; one need not live in an empire to be sexist, xenophobic, etc. Consider for example Jeremy Punt’s discussion of the imperial context of Corinth, a matter that receives no attention in the essay after its summarization (p. 56–57). There are instances to the contrary (e.g., Marchal’s discussion of Paul as an imperial intermediary, Kahl’s discussion of Celtic warriors, Lopez’s comparison of Paul and Trajan), but many essays’ intense focus on theoretical concerns allows their eminently historical topics—Paul and various sites of comparison—to slide away from their distinctive contexts. Understandably, the contributors do not want to distract their readers with debates over composite letters or the demographic makeup of a given congregation, but these issues might have aided in offering concrete images for less experienced readers to draw upon.

Christopher Stanley has done a service in reprinting articles that were previously in more obscure venues as well as collecting new essays that are valuable contributions in their own right. One hopes they spur further interest in this topic.

Christopher B. Zeichmann is a doctoral student in the New Testament at Emmanuel College, Toronto.
Download review as PDF 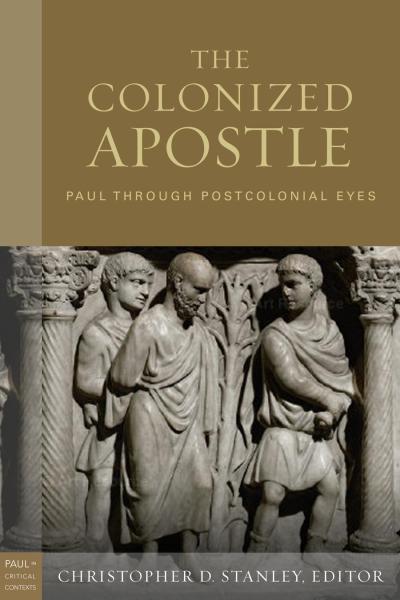