Arundhati Roy (2004) asserts that contemporary discussions about resistance are critical, a claim which David Jefferess takes to heart in his examination of the conceptualization of resistance in the field of postcolonial studies. Jefferess discerns two main frameworks according to which postcolonial critics have understood resistance: resistance as opposition to colonial power, or resistance as the subversion of colonial power.  These frameworks, according to Jefferess, do not speak adequately to the reality of contemporary global power and injustice. He proposes a third way, transformation, which goes beyond forms of resistance that seek to overcome oppressors (through violent or non-violent means), or that aim to display the incomplete nature of colonial power through counter-discourses. Resistance as transformation aims not only to free the oppressed from dominating structures and subvert the authority of those structures, but also to liberate the deep structures of human society. Jefferess imagines, along with Fanon, a “radical restructuring of global relationships” (p. 4). Jefferess offers a theory of resistance that problematizes the discursive and material perspectives most commonly held within the field, and he creates a compelling vision for a “discourse of human dignity and interdependence” (p. 9).

The first portion of this book deals with prevalent conceptions of resistance: resistance-as-subversion and resistance-as-opposition. The first is explored in relation to colonial discourse theory, especially Homi K. Bhabha’s notions of hybridity and ambivalence, that seek to interrupt and destabilize colonial power. Such discursive resistance may contribute to psychological and spiritual liberation—the decolonization of the mind—but does not necessarily lead to physical and material liberation. Resistance-as-opposition seeks a more concrete decolonization, yet relies on antagonistic framework to imagine liberation for the oppressed. While postcolonial critics such as Fanon and Said recognize that liberation is more than independence from colonial power and requires the transformation of material as well as discursive realities, their oppositional paradigms fail to adequately envision a transition from colonialism to decolonization, through to a new political order.  Liberation is not simply the absence of an oppressor; it is the presence of a “profoundly different construction of identity, subjectivity and human relationships” (p. 167).

The latter portion of the book theorizes the idea of resistance-as-transformation. In order to construct a vision of a new political order, Jefferess turns to the significance of Gandhi’s social and political thought to “provide insight into the ways in which resistance can be imagined and articulated alternatively to dominant theories of resistance within postcolonial studies” (p. 96). Gandhi provided an “anticipatory discourse of transformation” (p. 101) by critiquing modern civilization as a system of domination, not merely focusing on colonial power in isolation.  Through principles of Hind swaraj (Indian home rule), ahisma (non-violence, or struggle without violence), and satyagraha (truth-force/love-force), Gandhi dissented from violent opposition while seeking liberation of all social relationships within the oppressive structures of modernity. Resistance, then, “does not signify the insurgency of the ‘oppressed’ against the ‘oppressor’ but the transformation of the material and discursive structures that maintain oppression” (p. 134).

Jefferess’ argument is furthered by his reflection upon the manner in which reconciliation was constructed within the Truth and Reconciliation process in South Africa. In that context, reconciliation was linked to material and social transformation, relying not on antagonistic confrontation, but the production of a narrative of mutual responsibility which serves to “deconstruct the antagonistic discourse of apartheid power” (p. 172). In both the Gandhian and South African examples, liberation is multi-faceted and involves the transformation of relationships, material reality, and perception of both self and other” (p. 22).

Jefferess, who teaches in the English and Cultural Studies Programs at the University of British Columbia, makes good use of his research interest in postcolonial literatures. His thoughtful analysis of critical perspectives on two novels: Tsitsi Dangarembga’s Nervous Conditions and Sindiwe Magona’s Mother to Mother, successfully problematizes the notion of resistance as opposition as well as the binary, simplistic constructions of victim and perpetrator.

Postcolonial Resistance opens up a space within postcolonial thought to challenge dominant constructions of resistance associated with both colonial discourse theory and materialist critics. In articulating a politics of change, Jefferess convincingly argues that resistance must be more than a freedom from oppression and must seek to free both colonizer and colonized (in all the complexities of these terms) from the myriad oppressions and look toward the transformation of both discursive and materialist consequences of power imbalance.  His notion of a praxis of love (building upon the work of Spivak and others) will result in a more profound and encompassing liberation—yet, I wonder how love as a political praxis will translate into contemporary situations of injustice and power imbalance. Although Jefferess recognizes the importance of material liberation in a manner that colonial discourse theories often fail to do, his theory of transformation, perhaps, does not go far enough to explain how the transformation of narrative relational structures results in material liberation. We are, to some extent, still left with Said’s “somehow” of liberation (p. 93, 181); that is, it is not clear who is responsible for initiating such transformation and how it will be accomplished.  As Jefferess acknowledges, both Gandhi and the Truth and Reconciliation Commission faced enemies that were clearly defined; oppressors in the contemporary context may not be so defined or physically available. Resistance-as-transformation avoids many of the pitfalls of other resistance theories, but it remains to be seen whether it is applicable beyond the examples of India or South Africa.

I would recommend Postcolonial Resistance to scholars and students of postcolonial studies who desire a more adequate expression of resistance that can potentially lead to healing and reconciliation for all those whose lives are shaped by colonial discourses.

Sarah Travis is a graduate student at Knox College, currently writing her thesis. 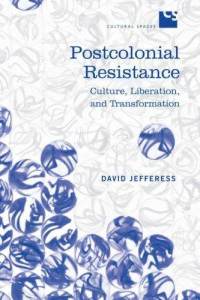