The collection of essays in this volume resulted from the “Racism/Postcolonialism/Europe” conference held at the University of Leeds, in 2006. Transdisciplinary in its methods, postcolonial studies are applied to historical, sociological, and political surveys. Continental European debates on race and racism reveal the importance of postcolonial studies, critical studies on race, and black feminist studies; particularly, within East European Countries (Romania), continental cases (Spain, France, Germany), and the UK. The collection contains discussions on (1) the German debate regarding Turkey’s inclusion in the EU, (2) post-2005 English paranoia towards multiculturalism, (3) Islamophobia and the public humiliation of minorities in the Netherlands and (4) post-republicanism in France, all of which are treated with a broad outlook placing emphases on racial ideologies central to the construction of both European nation-states and Europe. Finally, this collection deals with anti-Semitism, anti-Gypsism, and racism against migrants.

The aim of this collection is intellectual and political, in the tradition of Subaltern Studies and G.C. Spivak. The authors’ intention is to contribute to a postcolonial Europe that counteracts the “need to repudiate [Europe’s] imperial past clinging resolutely to the belief that there can be no alternative to the essentially European liberal democratic state” (p.1). They address the controversial notion of multiculturalism defined as both an egalitarian approach to diversities and conversely, a “specific political model of managing cultural heterogeneity in times of postcolonial ‘hyper-globalization’” (p.122). To envision the project of a postcolonial Europe, the authors work on past and present imperial/colonial histories in Europe through an in-depth analysis of popular and state racisms that are both nationally situated and pertinent to the European space as a political and legal structure.

In all the contributions, the notions of “colonialism,” “internal colonialism,” and “neo-colonialism” are deployed to signify internal forms of racism, involving a number of “minorities” that reside in European and national territories. I would not personally use the term “colonialism” to identify a process that refers not to the material or symbolic conquest of a close/remote territory/population, but to an historical conjuncture where globalization, migration policies and the construction of “European society” induce a re-edition of the (white) nationalist paranoia. Nevertheless, I acknowledge the effort made to outline the continuity between current European racism and its colonial past through a revitalization of these terms. The use of the adjective “colonial” (instead of “colonialism”) as a bridging-term between past and present forms of inferiorization is absolutely pertinent. Defining pro-Roma sentiments in Romania as internally colonial allows us to grasp how the activities of pro-Roma NGOs, EU anti-discriminatory laws, philanthropists, donors based in the United States, and local governments can foster the quality of life for the Roma people while denying any subjectivity to single and collective Roma formations. By defining “white paranoia,” German anti-Turkish feelings, and the “terror of multiculturalism” (p. 119) as colonial, the authors connect the current distribution and organization of racial stereotypes in popular culture, educational systems, and the political arena to the long-lived racist ideologies of imperial times.

Even if it has a clear political significance, the notion of colonialism in the case of Griselda Pollock’s discussion of the Holocaust (pp. 17-38) is problematic. As in the case of the chapter by Nidhi Trehan and Angéla Kóczé, on the Roma, the link established through the use of the term “colonialism” in anti-Roma/Jewish racism to colonial practices of discrimination, inferiorization, infantilization, and diminution of the humanness of colonized people is politically valuable. It enables us to trace trajectories of colonial/racial ideo- and techno-scapes across Europe, connecting the bio-political structure of control, segregation, exploitation, and elimination that innerves nation-building and colonialism as outcomes of civilization. But again, the problem is the possible misunderstanding of the particular experience of segregation and/or elimination of the less-human, typical of anti-Jewish and anti-Gypsy racisms within the nation-state building process. In using the term “colonialism,” these experiences are reduced to those of exploitation colonialism and its racial hierarchies. This is manifested in the distinction between Polish people and Jews. Polish people—colonized, inferiorized, and exploited—survived, while Jews—obstacles to the formation of a nation based on “one history, one blood, one country” ideology—did not.

The “colonial” legacy of current Islamophobia in United Kingdom, post-2005, is at the core of Ashwani Sharma’s essay. In his critique of multiculturalism as hidden white-supremacy Sharma offers an important insight on vernacular multiculturalisms “in dialectical opposition to the discourse of white anxiety and paranoia” (p. 128). It is against a new postcolonial racism–one that tries to contain cultural otherness in a condition that is increasingly impossible–that these vernacular multiculturalisms resist and reconfigure the nation, notwithstanding the impossibility of overcoming increasingly powerful postcolonial fantasies of whiteness and the United Kingdom’s “imperial nostalgia” (p. 176). The battle, now, is on the meaning associated with the term “multiculturalism,” while “multiculturalism,” as Spencer states in the last essay of the collection, “is hollowed out until it is reduced to little more than a signifier for multi-coloured conformity to the priorities of the British state” (p.181).

The decadent but still persisting fantasies of whiteness are termed “Europism” by Philomena Essed: “While Eurocentrism emerged from the victory of conquest and the ‘civilizing mission,’ Europism is based in the defeat of Europe, first by the United States, now gradually being followed by the Far East” (p.139). However, Europism is still fostered and underpinned by the same colonial stereotypes that sustained European colonialism. As Katarzyna Murawska-Muthesius states in her discussion of the Mohammad cartoons war,  the conflict corresponds to competing representations and self-representations of the colonial other in the War on Terror.

Finally, Michel Wieviorka analyzes the reasons (social, institutional, cultural, political, and intellectual) that lie at the very base of the banlieues crisis of 2005 and offers a new balance between private and public spheres in France. This given proportion results from the long-running, post-republican claim of religious communities and racial minorities to “both constitute themselves as a minority in the public sphere and continue to adhere to the Republic” (170).

This essay collection is a detailed, complex, transdisciplinary, and multilayered discussion of historical and current racisms in Europe, and an important contribution to the contemporary debate on race and colonialism in Europe and elsewhere.

Gaia Giuliani is a scholar in Colonial and postcolonial studies at the Dept. Politica Istituzioni Storia of the University of Bologna in Italy. 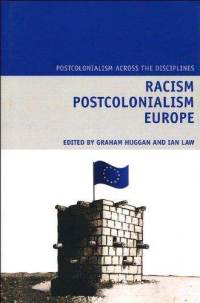