The essays found within Black and Postcolonial Feminisms in New Times emerged from a seminar held in 2006 to inaugurate the Centre for Rights Equalities and Social Justice at the Institute of Education, University of London, on the theme of Black1 and postcolonial feminisms. The contributors are predominantly from the United Kingdom with others from the United States, Canada, and Australia. The papers address three questions: (1) ”How…[do] Black and postcolonial feminisms illuminate race and gender identity in new global times?,” (2) “How are race, gender and class inequalities reproduced and resisted in educational sites?,” and (3) “How do women of color experience race and gender differences in schools and universities?” Thus, the essays locate themselves within a tradition of research into education as a crucial site of difference and inequality, and are concerned with how such forces are negotiated by students, teachers, and other social actors who wish educational spaces to become spaces of empowerment.

Many of the contributors draw on familiar tools of qualitative research such as interviews, autoethnography, and narrative in order to examine specific instances of institutional practice. Essays range from a study of young Muslim women in Malaysia, to Asian women’s experiences of the dowry system in the United Kingdom, African-American college students, and Canadian women of color. This volume stresses the diversity and particularity of such experiences, reminding its readers that postcolonial theory resists grand or universalizing narratives in favor of perspectives that highlight difference and complexity. And the book is successful in enabling such a range of voices and situations to speak. Indeed, as Heidi Safia Mirza argues in her introductory overview, postcolonial theorizing has never been about simple, linear reasoning in which its subjects progress from an oppressive, silenced history into a liberated, uncomplicated future; rather, it is about charting the complexities of identity in the face of the intersections of race, class, and gender with attention to both macro-level effects of educational institutions and micro-level interactions and relationships.

Perhaps the most vivid example of this is Uvanney Maylor’s account of her experience as a Black, female academic living in the United Kingdom. She relates how she is both invisible to colleagues and research subjects—with painful stories of arriving at a school to conduct observational research alongside a White co-researcher, only to be ignored by the deputy head teacher—and “hyper-visible” demonstrated when she alone, amongst a group of (White) colleagues traveling to an international conference, is stopped and searched at immigration. Her reflection on these experiences—she calls them “non-recognition” and “mis-recognition”(p 55-59)—adds a genuinely new dimension to her analysis as does her strong conclusion that such naming of institutional and personal racism is only one stage within the overall process of working for change. I found her essay to be exceptional for its clarity of analysis in terms of demonstrating how and why theory is important both as a tool of critique and of transformation. While all contributors make use of standard themes in postcolonial theory (e.g., hybridity, diaspora, third space, genealogy, globalization) and cite many of the familiar names (e.g., Gloria Anzaldua, bell hooks, Audrey Lorde, Trinh Minh-ha, Michel Foucault, Patricia Collins), some were more successful than others in integrating their qualitative material with theoretical insight. More editorializing might have brought a sense of coherence or claimed a particular significance for this volume. While Heidi Safia Mirza’s essay introduces the contributions, the book misses any kind of synthetic or concluding evaluation of whether these essays, as a whole, represent more than the volume’s individual voices.

The book also has significant omissions that may be of particular concern to readers of this journal, and these revolve around the lack of attention given to the significance of religion and religious practice for identity. Admittedly, this collection is about educational institutions and, indirectly, pedagogical practices, but—as is so often the case with social scientific feminist research—religious faith in the lives of ordinary women is comprehensively overlooked. Kalwant Bhopal’s essay on Asian women and dowries makes only a passing reference to religion in her subjects’ experiences of Islamophobic attitudes. Cynthia Joseph’s research sample is made up of Malaysian Muslim women from a range of ethnic groups; however, she does not consider how the practices or teachings of Islam might affect their identities or aspirations. If we were looking for a radical new departure in postcolonial feminist theory, we might expect it to be characterized by a greater degree of attention to religious and theological factors whereas this volume merely reproduces an outdated form of feminist secularism. Perhaps the fact that none of the contributors are currently located in the global South may have something to do with that.

Intergenerational differences are another absent theme. Heather Oesterreich’s essay deals with a young African-American woman who is labeled at school as a drop-out, obscuring her complex domestic situation in which she is the primary caregiver to her mother and nephews, holding together a delicate web of kinship relations. Addressing relationships between mothers, daughters, and grand-daughters, or between young women and older female role models and mentors, might have added valuable dimensions; especially, in contexts of migration and diaspora in which educational aspirations often figure large in one generation’s expectations for the next.

If this volume anticipates “new feminist visions for global times” (p.i), what do these look like and does it succeed in doing so? While Black and Postcolonial Feminisms in New Times is a very useful collection, it is more a demonstration of how established postcolonial theorizing might be put to work in the study of educational inequality, which has long been a site of academic and political interest. In that respect, this volume represents not so much a forging of new vision or direction as it does a reiteration of established perspectives.

[1] Racial identity terms such as “black” and “white” are capitalized throughout this review, following the style used in Mizra and Joseph’s book.

Dr. Elaine Graham is a Grosvenor Research Professor of Practical Theology at the University of Chester in the UK. 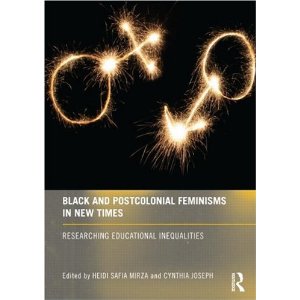