Stories are told, and retold, by victors. In Unlearning the Colonial Cultures of Planning, Libby Porter challenges readers to consider how stories are understood, told and enacted in communities in ways that perpetuate colonial systems of privilege. Informed and legitimized by planning theory and practice, hegemonic relations between European settlers and indigenous peoples continue.

Dr. Porter looks at Canada, the United States, and Aoteoroa—New Zealand and Australia—all former British colonies where indigenous people were dispossessed. She does so with an acknowledged standpoint, aiming for congruence between her personal and political project of unlearning colonial culture and her methodology. Drawing on an ethnographic approach, she analyzes “practices of everyday life” (p.5) and “webs of significance” (p. 6) as they are situated and take on power in planning contexts. Her expressed objective to work from passionate interest and methodological rigor is largely met through her sensitivity to perspectives and unacknowledged, long-buried assumptions in the everyday practices of planning theory and practice.

Porter argues that the only way to defensibly meet the challenge she sets herself is through deconstructing the cultural ethos of planning itself. To do otherwise, she contends, would be merely to move playing pieces around on the same table. As an example, she points out that the current focus on bringing traditional and scientific knowledge into dialogue in the service of land management will always reproduce the subordination of traditional knowledge unless power relations themselves are up for renegotiation. Nor are readers let off the hook by recent trends toward collaborative planning and meaningful engagement of diverse parties in decision-making. Porter frames these trends as dangerous unless those with power—typically people of European descent aligned with institutions—are willing to unsettle their ways. It is not only ways of doing business that need to change, she argues, but also ways of conceiving and enacting relations to land and social production.

Provocatively, Porter defines culture as “structures of feeling” (p.12). The implications of defining culture in this way remain undeveloped, leaving readers reaching for elaboration. What are the implications of this definition and how do structures of feeling incorporate multiple dimensions of culture—time, ethos, patterns of thought, identity, and meaning-making processes—to name only a few? Porter’s thin definition of culture as centered in feeling is mirrored in her final plea for planning to proceed from a radical ethic of caring and love. These two references to positive affect seem rather stark in the context of the book, which overall adopts a voice of critical, analytic deconstruction. Porter’s passion about her post-colonial project is expressed in abstract and theoretical arguments that do not always meet her stated aim to unsettle existing approaches precisely because they fail to adequately address symbolic, relational and affective dimensions.

One of the chief contributions of this book is its continual return to the question, not of differences between indigenous and non-indigenous peoples, but of the differences that differences make. Her accounts of the development of land tenure systems and mapping as political acts buttress this theme, demonstrating how European settlers privileged commodification, fragmentation and production-based utility in their approaches to occupying, managing and improving land. Her striking repetition of the insistence of European settlers in Australia that they had ‘discovered’ an empty land (terra nullius) underlines her thesis: that settler cultures have rendered indigenous people invisible in many ways over a long time. Her disturbing conclusion is unavoidable: the continuity of approaches that perpetuate unequal relations is maintained, in part, by planners and the social power they wield.

One central problem, as Porter acknowledges, is diversity within the subject groups. Indigenous people are diverse; their cultures are in constant flux and continual exchange with others around them. Settler populations, too, are in the midst of rapid change, as social and economic structures and relational cleavages are contested globally and locally. The economic crisis, in particular, has the potential to shift long-held assumptions about systems and relationships in settler-dominated societies, just as environmental crises spawn questions about how indigenous wisdom might have prevented some of the damage. Perhaps the very disruptions caused by rapid change and systemic strains can foster new opportunities for dialogue and recast processes for making and enacting policy among people with multiple metaphors about space, place and relations.  Porter is right that this promise would be realized if those with political and institutional power were willing to acknowledge the hegemony of their worldviews as constituting ‘normal and acceptable’ ways of managing land. As she recognizes, even if those in power were willing to examine the assumptions that animate their worldviews, the project of meaningfully engaging multiple worldviews in public decision-making is—at best—a work in progress.

Porter is alive to the danger of reifying images of indigenous people and their relations to space and place as distinct from settlers’. Yet her work strays into essentializing indigenous and non-indigenous peoples. Her examination of processes related to the Wadi Wadi people and the Nyah Forest in Australia is a case in point. Porter’s account positions the Wadi Wadi people as more legitimate than some other indigenous counterparts, with their respective political positions correspondingly more and less legitimate. While it appears that the Wadi Wadi people were not included in meaningful shared decision-making in relation to the Nyah forest, Porter’s framing of the process casts them more as victims than agents, more as maligned heroes than complex and multi-positioned actors. Her work in this section would be strengthened by the inclusion of more voices from indigenous and non-indigenous people representing a spectrum of views about the contested activities in and around the Nyah Forest. Additionally, in her case study of the Clayoquot Sound/Meares Island conflicts in British Columbia, Porter falls victim to essentializing, attributing ecologically holistic values to indigenous people that have not been realized in practice.

Porter further develops her thesis by arguing that the habitual divide between environmental and cultural values, aligned with non-indigenous and indigenous interests respectively, perpetuates unequal power. She problematizes the definition of ‘sites’ as discrete locations, citing indigenous perspectives that sites may be diffuse areas still to be identified in the future, given incomplete inventories arising from the ill effects of colonialization and the subsequent need for comprehensive surveys. Similarly, Porter argues against ubiquitous approaches that freeze traditional interests at particular points in history while failing to recognize the ongoing dynamism and diversity of interests. Finally, she criticizes collaborative approaches to planning for not going deep enough to question buried assumptions that reproduce the hegemony of European ontologies and epistemologies. These examinations of the bases of planning and public policy decision-making raise some important and thoughtful questions. How the answers might be operationalized is not explored, but is vitally important to her argument.

Porter’s book precedes the new volume by Canadian historian Paulette Regan titled Unsettling the Settler Within. Regan uses her own experience as a descendent of European settlers and a federal government employee working on residential school reparations to deepen her account of the unsettling process. Read together, the two books complement each other well in their arguments and core concerns. Regan’s book does something that Porter’s does not; it not only identifies standpoint, it uses narrative to bring the standpoint alive. It is hard to imagine how the theoretical ideas Porter meticulously documents will manifest a field-changing revolution in practice. At the very least, her book – if taken on board by the planning profession – may generate more work for conflict resolution practitioners.

Unfortunately, Porter provides very little practical material for those who would like to unsettle planning practices. A short and diffuse section at the end of the book includes suggestions of how this might be accomplished without wrestling any of the demons that arise whenever policy and decision-making structures and frameworks are contested.

I anticipate that Porter’s book will be read by many of her fellow professionals who see themselves as well-intended and even as advocates for those whose identities and voices have been ignored. Setting aside the skepticism or defensiveness with which they may read her work, I wonder what it would mean if they were to take it seriously. Porter acknowledges that one unavoidable implication is that planners need to include more indigenous people—and their ideas about relations, place and space – in their ranks. Surely it is true that the planning discourse itself needs to be more permeable and adaptable to growing legal and social awareness of indigenous rights, and Porter’s discussion of the emergent Gariwerd/Grampian collaboration in Australia raises glimmers of hope. Anchoring the argument for (post)colonial approaches to planning in this example of relative success strengthens her work.

Even if these ideas are accepted as both sound and self-evident, the question remains how the settler majority of planners in the subject countries should conduct themselves. Should education and continuing study for professionals be directed to unsettling settler attitudes and practices? How would this be done, and by whom? Surely educational reform—even if successful—would be insufficient. Porter envisions a wholesale unsettling of the field of planning through reviewing and rethinking its cultural assumptions. In her advocacy, she fails to fully explore how planning is itself a practice embedded in legal, regulatory and policy structures that would need to change alongside planning education and practice to create the radical de-centering she advocates. As well, she fails to seriously engage the substantial literature on collaborative decision-making in ways that would reveal its potential contributions to the unsettling project.

Stories are told—and retold—by victors. Porter suggests a radical re-ordering of the victor identity. In doing so, she poses many questions that will spawn new questions as they are engaged. Her contribution to the field of planning and related areas of public decision-making is substantial. It would be even stronger if she made a clear case for a truly collaborative practice; at the end of the day, the book leaves the impression that indigenous people should re-emerge as victors, replacing colonizers’ hegemonic domination. Here lies the central challenge of the book: the need for co-existence between indigenous and non-indigenous peoples exists in all the countries about which she writes. Planners and publics urgently need to find ways to work meaningfully together in modalities that respect multiple systems of meaning, diverse identities and different worldviews. They need to bring nuance and complexity into their work in ways that do not reproduce unfair and exclusionary histories. In the end, Porter leaves this challenge unanswered.

Michelle LeBaron is Professor of Law and Director of the Program on Dispute Resolution at the University of British Columbia, Canada. 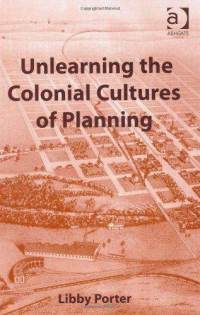