Martin McKinsey’s Hellenism and the Postcolonial Imagination is an energetic comparative reading of three very different poets, each occupying a peculiar position with respect to the cultural and political center of the British Empire. McKinsey organizes his reading around the trope of Hellenism, which refers broadly to the “historically mediated idea of ancient Greece and its cultures,” as cultivated among intellectuals in eighteenth- and nineteenth-century Europe, and narrowly to “the espousal of the Hellenic ideal and the assertion of Greek exceptionalism” among Victorian authors (p. 9). McKinsey applies a postcolonial analytic to Yeats, Cavafy, and Walcott, each of whom appropriated Hellenism differently according to specific local concerns.

In the introduction, McKinsey outlines a dialectic between the center and margins that underwrites all of his analysis. As a cultural discourse, Hellenism was produced at the center and disseminated to the margins, but those who appropriated it at the margins were not sullying it or producing a degenerate counterfeit. On the contrary, McKinsey argues in his introduction that the “periphery’s borrowings from the core culture can be understood as active rather than passive, creative rather than “degenerative” or “obsequiously submissive” (p. 25). He reads local appropriation of Hellenism as generative but also transgressive. As he notes later in the introduction, the Hellenism of Victorian England was already an Anglicized Hellenism—the Greeks as a cipher for whiteness—but the multifarious representations of Hellenism found in postcolonial literature destabilize this monolithic vision. In this way, they were “writing back to the center” but they were also “writing back to their particular neighborhood of the encircling globe” (p. 34).

McKinsey does not undertake a full survey of Victorian Hellenism but rather focuses his efforts in chapter two, “Ulysses Victorianus,” on the story of Ulysses as a single thread in the fabric of Hellenism. He offers a reading of Ulysses as a colonialist archetype, at least in the character’s post-Homeric literary afterlife. Ulysses is a voyager, discovering new lands and rendering them in his own language. As read by McKinsey, Ulysses is a figure who speaks with a forked tongue, to borrow language from Homi Bhabha. In his many encounters with the strange, exotic, and foreign, he “invokes the two faces of colonial control: paternalist benefactor (bringer of “the rule of law”), and disciplinary enforcer” (p. 46).

The story of Ulysses—that is, the story previously encoded in Homer’s Odyssey—was a significant point of contact between poets at the margins and those at the center. If Ulysses can be read as an archetype of the colonial master, fraught with the ambivalence of imperialism, there is ample room for subversion in appropriations of the story. McKinsey follows a shift in Yeats’s work from Irish epic in a latently Homeric mode to a self-conscious assertion that Ireland is no second Troy. This is addressed in chapters three and four and attributed to Yeats’s movement from England to Ireland, from imagining a mythic Irish landscape to confronting a grim social reality.

McKinsey’s reading of Cavafy spans chapters five, six, and seven and he describes the poet as an “odd, clattering assortment of identities” (p. 79). Cavafy was a Greek-Egyptian with Turkish roots who spent time in England and was also homosexual, adding a further layer of marginality to his overall profile. In these chapters, McKinsey is primarily concerned with the relationship between Cavafy’s biography and his poetic output. McKinsey reads Cavafy’s poem, “A Second Odyssey,” through Bloom’s concept of kenosis, which is “ a subversive form of mimicry that ends in humbling failure: a self-humbling that enfolds the precursor in its fall in such a way that the precursor falls all the more momentously” (p. 89). McKinsey further explores the intersection between Cavafy’s biography and his literary output in chapters six and seven. He first situates Cavafy’s poem, “Waiting for the Barbarians,” in the context of the poet’s experiences as an outsider in Paris and London. Then, in chapter seven, McKinsey explores Cavafy’s decision to express himself in his native Greek rather than in English, which McKinsey characterizes as “a way to escape the ‘linguistic gaze of the colonizer’” (p. 119).

In the second half of chapter five, McKinsey inserts a major excursus on Bloom’s Anxiety of Influence, which McKinsey argues holds an important place in the history of postcolonial literary analysis. McKinsey appeals to Said’s own critique of Bloom as instructive. For Said, Bloom fails because he did not make a connection between the poet’s historical and cultural position and his poetic output. At the same time, although most commentators highlight Foucault’s influence on Said, Said’s debt to Bloom is equally significant, by his own admission. Bloom highlighted the dialectic between production and reproduction, which implicitly places poetic and literary production in the context of a specific matrix of power relationships.

Even if Bloom did not do enough to identify these dynamics with any historical specificity, his theory draws us to the space between texts. And, as McKinsey points out, “intertextual approaches have been a mainstay of postcolonial criticism from the outset” (p. 93). Bloom’s implicit intertextuality is met by Said’s Foucauldian emphasis on power. To this, McKinsey adds Frantz Fanon’s The Wretched of the Earth, which opened later conversations about resistance but also the psychological impact of oppression.

This leads to McKinsey’s contribution, the idea of a specifically postcolonial kenosis. Borrowing the idea of a literary kenosis as a self-emptying or humbling from Bloom, he translates the concept into postcolonial terms. Put simply, postcolonial kenosis is “an act of mimesis and homage that is the same time an act of disavowal” (p. 97). In greater detail, McKinsey writes that kenosis is a poetic process that starts out as mimicry of a European precursor, and ends as symbolic decolonization, where the putative imitation first empties the model of its godhood—thereby rendering its cultural victory hollow—and then in the name of greater authenticity (here with respect to both Homer and Dante) divests the prime ‘idea [or] raw material’ of undesirable colonialist impositions” (p. 98).

This section is easily the most interesting in the book and if I have a criticism of McKinsey’s work, it is that this brief but canny sub-chapter is inserted more or less in the middle of the book where it could have been useful nearer the beginning. McKinsey uses Bloom’s thought in his discussion of Yeats, for instance, although he does not invoke kenosis until he reaches Cavafy. Even so, his choice to rely on Bloom is not fully explained until the reader reaches this section of chapter five. This is an intentionally slight criticism because the organization is still admirably clear overall. The flow of argument is never difficult to follow and the discussion moves quite elegantly through McKinsey’s points. It is ultimately not surprising to learn that McKinsey is both poet and critic. His argumentation is less academic than it is literary in its own right. The reader is therefore drawn into the essay-like structure of the book, experiencing the excursus on postcolonial kenosis as a welcome flash of insight. The criticism stands only because this style of presentation is all but impossible to skim effectively, which is less than ideal for an audience of overtaxed academic readers.

Chapters eight, nine, ten, eleven, and twelve all address Derek Walcott, a Saint Lucian poet. Each of these chapters is relatively short, creating a fragmented mosaic of ideas. His poem, Omeros, is a self-consciously Homeric epic and the subject of chapter eight. Chapter nine addresses the Adamic act of naming, another New World trope that identifies creation with colonization, as if the pre-European history of a place were “no history at all: the voice before creation” (137). In Chapter ten, McKinsey turns to the notion of Black Greeks, figured in Walcott’s Another Life. Chapter eleven returns briefly to Omeros and to the question of names. In chapter twelve, McKinsey returns to the Black Greek, an idea that made an appearance in Another Life. In all, McKinsey’s treatment of Walcott is decidedly the most impressionistic and for that reason, perhaps the least effective. At the same time, the discussion addresses issues of race and gender that are not raised elsewhere, making it a valuable contribution to the overall volume.

In his conclusion, McKinsey reiterates his point about the inherent hybridity of Hellenism itself. The poets in this study return Hellenism to its hybridized roots by undermining its monolithic representation. McKinsey also draws out the irreducible locality of culture. This is a worthwhile reminder in the present globalized context. But for postcolonial theology, McKinsey’s most important contribution is his attention to poetry itself. According to McKinsey, poetry is especially suited to postcolonial conversation:

with its deep formal and lexical memory, and its attention to the reticulated landscape of the local, [poetry] is well situated to register the tectonic shifts that are integral to our era. (which I hope is not to cast poetry as the canary in the coal mine). Yet even as a recalcitrant spirit of place, poetry takes part, inescapably, in the global dynamic (176).

Given that religious texts are so often poetic and so often engage a mythological register, this is a keen reminder that, where poetry is perhaps particularly suited to register the shifts, so is religion. Meanwhile, poetry itself functions as a template for theological inquiry. Addressing theology on poetic terms may just be the most effective way to write back to the center while simultaneously addressing a local neighborhood. Whether or not McKinsey’s analysis of his data are of interest to theologians, his work is a potent reminder to postcolonial theologians never to overlook the poetic as either a source or a mode of theological writing.

Annie Bullock is a graduate of Emory University and is currently a Humanities Instructor at Regents School of Austin. 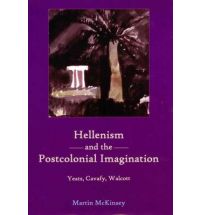