Whitney Bauman’s primary claim is audacious: the Christian theology of creatio ex nihilo (God has the power to create something out of nothing), is the historical cause of the colonial doctrine of terra nullius (that land God gave to humans in common was originally “empty,” and therefore available to be claimed, morally, by European invaders). In addition to this negative critique, the latter half of the book offers a second, positive argument, that the contemporary response to this sorry history should be a new “viable agnostic theology,” a revived Christianity, without the hegemonic God, growing from a theology of creatio continuo, or continuous creation. These two arguments can be held separately, of course. It is possible that one is persuasive while the other is not.

“I argue that the Christian doctrine of creatio ex nihilo has served… as an ontological and epistemological foundation for a ‘logic of domination’ throughout the history of the Christian West,” Bauman claims (p. 2). And, in turn, “When universal validity is assumed, then the only option for ‘encountering’ the other (human and non) is through assimilation, avoidance, or destruction: the three pillars of violence” (p. 4). Not surprisingly, then, Bauman locates the opening moves in this argument in the early Christian debates over orthodoxy: the Gnostic Marcion’s expulsion from the Church in 144 C.E., and particularly in Iranaeus’ use of ex nihilo “as a rhetorical device for claiming orthodoxy” (p. 25). The one true God’s power lay in His ability to create out of nothing, an unsurpassable power that could not be claimed by pagans or Christian heretics.

The transition from early Christian sectarian infighting to Empire occurred with Constantine. “Here,” Bauman argues, “ex nihilo becomes a foundation and justification for persecution, missionizing, and colonizing others, and for cultivating ‘wild’ lands for the benefit of the one, true, Christian empire.” (p. 33) Land, and anyone that “culture” connects to “nature,” is subject to domination. The domination of women and people who are “native” is depicted as a moral impulse: violence is justified by the “gift” of civilization.

Columbus provides the muscle in this narrative, while John Locke provides the ideology. Bauman quotes Locke’s Essay: “Matter, then, by its own Strength, cannot produce in it self so much as Motion: The Motion it has, must also be from Eternity” (p. 85). Just as eternity is essentially active, while matter is passive, so Europeans were agents of the active force of civilization when they sunk a shovel into the passive earth and created value with agriculture.

We see the same sort of logic today, for example, in arguments that the Alaska National Wildlife Refuge should be opened for oil drilling on the grounds that there is “nothing there” (p.99). And in academia, “…the specialization of knowledge and the idea of ‘progress in knowledge’ at work in the academy operate through an ex nihilic logic as well…. ‘Discovery’ allows one to feel the ‘objective’ or ‘expert’ gaze by blocking off all other reality outside of a narrow set of questions, experiences, and concerns” (pp. 102 and 103). The lecture is to academia as the shovel is to the earth.

In all, I find the first half of the book engaging, and largely successful, despite the extraordinary scope of the argument. Bauman’s argument takes the basic contours, familiar to many who work in these regions, and richly fills them out with a coherent account of how church politics led to the moral high tone of colonial domination.

I find the second half of the book less persuasive. Here, Bauman attempts the constructive project of “recreating” the creation, this time in a post-modern form of Christian agnosticism. Creation from nothing becomes continuous creation, creatio continuo.

The question Bauman asks himself is, “…how might a Christian theology of creation seeking to mitigate colonial violence be re-constructed so as not to repeat this metaphorical support for a ‘logic of domination’?” (p. 126) The answer is that God becomes a “concept” that is, however, not “ethically anthropocentric.” “…’God’ is a historical-social-ecological-cultural located symbol that certain human beings have used to describe a certain aspect of reality” (p. 128). God becomes ongoing creation without transcendent creator.

Atheism and theism are two sides of the same coin for Bauman. Both are forms of absolutism. Agnosticism leaves room for “openness, change, and thus attention to the living, changing world” (p. 151). And this is what allows for the “environmental ethics” in the book’s
title. Bauman argues (pp. 154 – 163) that creatio continuo allows us to see nature as “gift.” The openness of constant change is also consistent with modern science: the theological concept of “emergence” is consistent with the science of non-equilibrium thermodynamics (p. 155).

There is much that is genuinely creative in Bauman’s account of creatio continuo. However, I remain skeptical. The post-modern side of Bauman’s positive project subscribes to the, by now familiar, view that language creates “worlds.” The theological dimension, in particular, grows out of metaphorical terms, chief among them are terms like “creation as gift” (rather than as property) (p 155). But there are metaphors that open up to understanding, and there are metaphors that are simply obtuse. If “creation” is without creator, in what sense can it be a gift? Does it really elucidate anything to refer to the scientific process of evolution as creation? Wasn’t that exactly what Darwin denied? Bauman is aware that “many scientists might cringe” at such metaphors (p. 161). With good reason. The “really hard problem,” to borrow Owen Flanagan’s felicitous term, is how there can be human and spiritual meaning when there is no “gift.”

So, why is Christianity, even radically reformulated, a part of the solution to colonialism, past and present? Bauman addresses this question forthrightly:

…why do I continue to work within the symbols of Christian theology if the doctrine of ex nihilo has been so destructive throughout the history of the tradition? Part of the answer to this question has already been given, we cannot escape our bio-historical traditions and begin ex nihilo to construct new, meaningful symbols. A secondary answer is practical. As [Gordon] Kaufman notes, “Though God may be dead or largely irrelevant for many in our world, this symbol remains much more powerful and meaningful than any other, not only in the West but in many other places around the globe as well.” (p. 137)

Granted, it remains powerful… but how exactly is it meaningful? Given Bauman’s historicist arguments, the ex nihilic configuration of Christian power surely will remain the dominant voice for some time. Would it not be better to quit using Christian symbols, at least for the time being? Isn’t our moral responsibility to simply stop using these symbols? I recall Richard Rorty once being asked the question, “Professor Rorty, what do you think of God?” His answer, as I recall it, was that he wished we would simply stop using the word so it could lose its power over us. We need a moratorium on this sort of talk.

I close with a set of, I hope, constructive suggestions. In spite of the avowed pluralism of Bauman’s approach, there is a remarkably univocal voice to the argument. Christianity appears to be the only Western religion. I found only one brief reference to a non-Christian religion. There are many, diverse religious traditions here, many of which have been here much longer than Christianity. Shouldn’t they be part of the conversation? One could argue that failure to notice these traditions is itself a form of neo-colonialism. There is very little notice of divergent voices within the Western European traditions. Bauman takes note of Nietzsche’s critique of
Christianity, but what about Nietzsche’s odd admiration for Spinoza?

Bauman’s critique of academia should be applauded, but I can’t help noting that the book reeks of academic authority. The hyphenated words alone (epistem-ontology, inner-course/outercourse) function as gates through which the ordinary intelligent reader passes at his or her own peril. These issues are urgent! Isn’t there a moral imperative to write in the most accessible terms?

Finally, there is an implicit theory-practice divide that ought to be troubling from a postmodern perspective. Summarizing his conclusions Bauman says, “What I hope for is something like an interdisciplinary process in which we… get to know one another. Then we can focus together on specific ‘problem spots’ such as global climate change, environmental racism, economic exploitation, etc” (p. 147). It’s possible to make too much of the “first… then” structure of this comment, but, in fact, there is very little about environmental ethics in this book, despite the title. This is a theoretical preface to environmental ethics, if one accepts the metaphors. It is not at all clear how creatio continuo addresses concrete problems, and time is running out.

This is a provocative book in the best sense. It clarified many things for me, and it provoked me to reflect deeply on what seemed (to me) wrong. 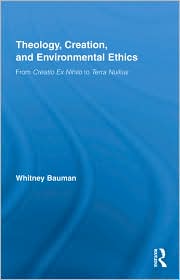