The place of French philosopher Gilles Deleuze remains tenuous in postcolonial conversations ever since Gayatri Chakravorty Spivak criticized Deleuze’s work in her essay, “Can the Subaltern Speak?”1 Deleuze’s philosophy, she argues, complexly falls into the trappings of Eurocentrism and totalization. A new edition, Deleuze and the Postcolonial, edited by Simone Bignall and Paul Patton of The University of New South Wales (Sydney, Australia), risks a different possibility—a possibility that Deleuze might hold much more promise for decolonial thought in a multiplicity of conceptualities and contexts.

The book, an edition in the “Deleuze Connections” series from Edinburgh University Press, “forges connections between Deleuze and the postcolonial, in the form of conversations, negotiations and meditations” (16). Twelve essays, from a wide range of scholars, seek new creative paths through a reexamination of Deleuze’s work (as well as his collaborations with Félix Guattari) in a variety of postcolonial modes. Indeed, the book seeks to articulate a sort of mutual transformation; “it aims to open up new possibilities for inventing the postcolonial world, as well as new ways of creating the names of Deleuze” (17). In such aims, Deleuze and the Postcolonial begins to open up the complexities of these themes in interesting methodological ways.

In the introduction to the volume the editors divide the essays into three sections: “philosophy and ethics” (14), “postcolonial issues concerning cultural production and representation” (15), and “postcolonial nationhood” (16). Each section opens up new linkages and connections between Deleuze and postcoloniality, ranging on meditations from Australia and Palestine to locales in Africa, the Americas, and Asia.

Particularly important to the collection is the opening essay, “Living in a Smooth Space: Deleuze, Postcolonialism and the Subaltern” by Andrew Robinson and Simon Tormey. The essay works to address Spivak’s critiques of Deleuze in order to expose the beneficial postcolonial possibilities of Deleuze’s work. Indeed, they write, “Getting beyond Spivak’s early analysis is crucial for assessing the usefulness of Deleuze’s and Guattari’s work for the kinds of critical intervention which postcolonial theory seeks to develop” (21). The essay opens up further negotiations and future conversations between Spivak and Deleuze.

Other important moments in this volume include meditations on the concept of the nomad and other Deleuzean themes. An essay by Simone Bignall helpfully meditates on “affective assemblages,” proposing that, “Deleuze’s work is part of an alternative tradition of Western thought that offers potentially non-imperial conceptualisations of sociability, motivation and self-comportment” (79). Nick Nesbitt writes on the utterly vital relation between Deleuze and the late Martiniquan theorist Édouard Glissant in an essay on “The Postcolonial Event.” Philip Leonard crucially examines Deleuze’s meditations on the concept of the virtual to ask the question, “Virtually Postcolonial?” Leonard probes Deleuze’s relation to cybertheory, observing that, “just as postcolonial theory’s concerns lie broadly with invisible persistence of colonial structures in a world that seemingly rejects colonial rule, so Deleuze argues that the nation-state constantly reasserts itself against both internal and external threats” (253).

The book’s attempt to open possibilities within Deleuzean and postcolonial thought is remarkable and thus wholly welcome, and is a project to which I remain utterly sympathetic. What causes me pause, however, is indicative of a larger difficulty with Deleuze in particular. My first concern in relation to this volume is a lack of critical attention to religious or theological constructions. A few of the essays do tangentially touch on the religious and the theological. For example, John K. Noyes’ “Postcolonial Theory and the Geographical Materialism and Desire” notes the “death of God” and invokes Henri Lefebvre to articulate the contemporary “secularized network of Logos, Cosmos and Law in the service of capital accumulation” (57).

These glimmers of theological reflection are rare and, granted, not the prime focus of the volume. Yet, if decolonial discourses are to be serious, they must take on the religiously motivated forces of colonization, the theologies of the colonized, and the complex, hybrid negotiation of these entangled figures. This omission of the theological is indicative of Deleuze’s impatience with languages of transcendence in general. Still, an anti-imperial theology sympathetic to Deleuzean concepts is indeed possible, as evidenced by the stunning works of Sharon Betcher, Roland Faber, Catherine Keller, and Laurel Schneider.

A second issue concerning Deleuzean postcoloniality is that of negativity, depth, and mourning. Can Deleuze’s thought—a thought utterly dedicated to the surface, the immanence of life—appropriately articulate the deep mourning often necessary for resistance to and transformation of the violence of postcolonial encounter (historically and contemporarily)? While his emphasis on affect, desire, and aesthetics might contribute to an understanding of our embodied, emotional states, Deleuze may not provide an adequate enough account of the vulnerability of our relations—even as he articulates the intensity and necessity of them.

It may be that a new postcoloniality is emerging in conversation with Deleuze, a new shoot bursting in the rhizome of decolonial thought. Such a valuable novelty converses deeply with the orthodox “trinity” of postcoloniality—Said, Bhabha, and Spivak—but reterritorializes new possibilities for critical theory, praxis, and poiesis.  Again, one such possibility we might consider is the creativity of theology itself. We can only hope that such an entanglement of ‘Deleuzean’ studies and postcoloniality exposes religious filiations and affinities as well, alluring, beautiful, and monstrous. In that way, Deleuze and the Postcolonial is a welcome addition to the ever-riotous assembly of decoloniality.

[1] Gayatri Chakravorty Spivak, “Can the Subaltern Speak?” in Marxism and the Interpretation of Culture, ed. Cary Nelson and Lawrence Grossberg (Urbana: University of Illinois Press, 1988), 271-313. 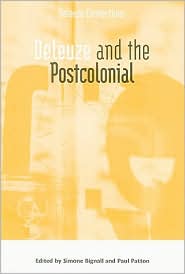