The field of African Diaspora Studies is growing and becoming increasingly more sophisticated. Although there is a perceived lack in the field’s “existing body of conceptual and definitional knowledge” (Sweet, 2010, p. 1) this welcome, theory-thick anthology, The African Diaspora And The Disciplines, provides a refreshing corrective. The book features several of the papers presented at a two-day, March 2006 conference held at the University of Wisconsin-Madison (USA) that was organized to investigate what the volume’s editors consider to be an axiomatic issue in African Diaspora Studies, namely, how diaspora is conceived, especially in a transdisciplinary (literature, religious studies, genetic biology, history, archaeological chemistry, et al.) and transnational (Jamaica, Europe, and South Africa, et al.) way. Following their informed and appealing introduction, the editors divide the book into four sections (Histories, Social Sciences, Arts and Cultures, and Diaspora Contexts), and each unit amply fulfills the book’s stated purpose, which “is twofold: (1) to theorize and define methods, problems, and conflicts of ‘doing’ African diaspora research and scholarship from various disciplinary perspectives, and (2) to initiate and facilitate interdisciplinary and cross-regional dialogues and debates on African Diaspora Studies” (p. 2).

Section one investigates the peoples, ethnographies, and histories associated with the African diaspora. In five tightly argued and nuanced chapters, contributors convincingly uphold history’s research value (K. Butler); problematize notions of ‘creolization’ (R. Price); trace the link between genes and migratory patterns of the African diaspora (F. Jackson and L. Borgelin); employ cultural geography to show how African-derived peoples have used food, medicines, and space to shape American landscapes (J. Carney); and, emphasize archaeology’s present-day sense that the African diaspora may best be understood as ranging across five continents (T. Singleton). The second section shifts the focus away from history and towards the social sciences. Here, three contributors urge Caribbean sociologists to consider more local networks of intellectual influence (P. Henry); admonish political scientists to study and stress regional political modalities, especially those of the left-wing variety, as alternatives to the pull and force of late modern captitalism in the African diaspora (R. Fatton); and call for a diaspora philosophy dedicated to discourses of freedom and ideological struggle (O. Táíwò).

The third section ponders and probes theater studies (S. Richards), ethnomusicology (M. Butler), visual art and art history (M. Okediji), and cultural studies (G. Farred). Its contributors appear united, for the most part, by the belief that identity markers like race, class, gender, and sexuality often intersect and thwart static construals of community in the African diaspora. A more expansive understanding of the African diaspora’s broad consciousness may follow from closer scrutiny of performance, dramatic as well as musical, and from a delicate sensitivity to the politics of African diaspora subjects and those who study them.

A final section takes us outside North America, offering three case studies of ideological and artistic creation in the African diaspora. In the book’s most audacious and astute essay, we hear that Jamaican reggae took on a more synthesized feel in the late 1980s and throughout much of the 1990s, leading to electronic subgenres of reggae like dancehall. Music from these decades often features punched-up techno rhythms, sexual boasting, drug references, and perceived anti-feminist as well as homophobic themes, made famous by artists such as Buju Banton, Mad Cobra, and Shabba Ranks. But here, the essayist (C. Cooper) abandons the standard narrative dismissing dancehall as sexist; rather, she resituates it in the context of West African rituals celebrating life’s maternal impulse, and she sees it as a Jamaican womanist politics of subversion. What Olaniyan and Sweet call the “contours of diaspora politics and scholarly production” (p. 12) are further explored in the African Renaissance philosophy of former South African president Thabo Mbeki, although the volume’s contributor (X. Mangcu) treats it as little more than a tool for advancing Mbeki’s political party and its economic policies. A final chapter (J. Ifekwunigwe) addresses Europe, and the difficulties of situating any notion of transnational African-ness within a Europe devoid of singularity, before it appeals to scholars to “engage across ‘international’ boundaries in a truly dialogic manner” (p. 326).

The clarion call for more nuanced research in Global African Diaspora Studies has not gone unheard or unnoticed; indeed, monographs, book chapters, and peer-reviewed articles have started to appear, and such impressive texts broaden our scope and heighten our awareness of the African diaspora’s intricate, transcultural reach, even in seemingly unlikely places. One thinks of Marvin D. Sterling’s arresting, multi-sited ethnography of Afro-Asian cultural exchange, Babylon East: Performing Dancehall, Roots Reggae, and Rastafari in Japan (Duke University Press, 2010) which shows, among other things, how race in Japan complicates notions of blackness beyond the traditional boundaries of the African diaspora. No scholar working on the phenomena of cultural globalization can afford to ignore Sterling’s book, I suspect, and something similar could be said for The African Diaspora and the Disciplines, which ranks as an excellent contribution to the growing field. Definitely for specialists, the collection requires careful study and measured criticism of its individual elements; it is a cogent, suggestive work that will energize scholars across the disciplines to further mine this rich vein.

Dr. Darren Middleton is a Professor of Religion at Texas Christian University. 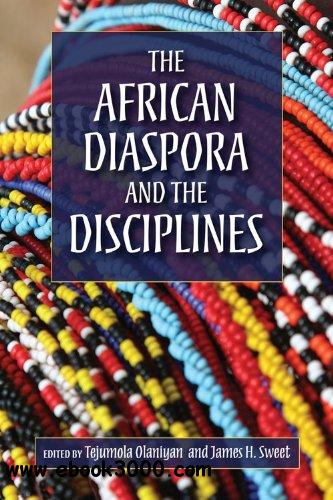