Review of Mark Lewis Taylor’s The Theological and the Political & A World for All? by Storrar, Casarella, Metzger & Naidoo

Review of Mark Lewis Taylor’s The Theological and the Political & A World for All? by Storrar, Casarella, Metzger & Naidoo

Mark Lewis Taylor, The Theological and the Political: On the Weight of the World. (Minneapolis: Fortress Press, 2011), pp. 256

“You remind us that our Wall Street Bull has become a false-idol, a golden calf, and a symbol of our spiritual poverty. So we are here, from our Synagogues, and our Mosques, and our Churches, to stand with you, and to remind this country, that there can be no such thing as justice until there is economic justice” (Ellick 2011).

This is a prayer that still reverberates from Wall Street as communities dare to “occupy” the public sphere to initiate counter-discourses and experiment with an alternative politics to re-create the world. What has faith to do with such political activism in the public sphere? What is the theological criterion for discerning the politics of the Tea Party and the Occupy Wall Street movements? How does the Church witness in the public sphere in solidarity with other movements proclaiming the advent of a new world for all, transcending our religious boundaries? In what way do the politics that emerge from the creative expressions of the excluded and the incarcerated inform theology in our times? These are some of the profound questions that we confront today, and which The Theological and the Political: On the Weight of the World and A World for All? Global Civil Society in Political Theory and Trinitarian Theology helps us to wrestle with, even as they challenge us to radical re-imaginings and engagements.

Global civil society is a contested concept. According to John Keane:

“Global civil society enables individuals, groups and organizations to organize and to deploy their power across borders . . . . This society provides non-governmental structures and rules which enable individuals and groups to move and to decide things, to follow their inclinations, to bring governmental power-holders to heel, to engage in many kinds of mutually beneficial exchanges, even to work for the socialization of market economies so that production for social need, rather than for profit, prevails” (Storrar, Casarella, & Metzger 2011, p. 32).

“gripped by feelings of humiliation; of being crushed into impotence that derives from the failure to be understood, the simple inability to make their voices heard, to be recognized as the potential makers of their own histories” (Storrar, Casarella, & Metzger 2011, 35).

The meta-visions and projects of dominant civil society initiatives are incapable of addressing deep-rooted structural evils as their perceptions are tainted by their locations of privilege. Civil society, in the Gramscian understanding, “is the soft underbelly of the capitalist system which would be developed by the oppressed as an arena to challenge the hegemony of the ruling classes in their struggle for the ultimate transformation of capitalist property relations and the state” (Mantar 2011, p.7). But what we are witnessing today in dominant civil society initiatives is not the formation of an arena of counter-hegemonic discourse and politics. Rather, movements that defy the cartography of dominant politics are proposing alternative meanings to civil society by “occupying” the public.

A World for All?: Global Civil Society in Political Theory and Trinitarian Theology is a creative attempt to problematize the concept of global civil society and explore the relationship between civil society and the Church. The hope is that Christian engagement in civil society will translate the inclusive social vision. The authors argue that in order to keep the focus on inclusive social vision alive, civil society requires a political theory that challenges the logic of the unconstrained power of globalization and develops alternative political institutions that midwife the birth of a world for all. While the book endorses the need to strengthen the theological engagement with civil society initiatives, the authors are critical about hegemonic ethics that privilege the interests of the dominant and silence concerns emerging from the Global South.

As the title of the book suggests, its theological proposal is to initiate a conversation between the political theory of global civil society and Trinitarian theology. The beauty of the book lies in the many voices seen in its pages as it facilitates this dialogue. This commitment is exemplified by the presence of some voices that affirm the significance of the “social analogy of the Trinity” (Storrar, Casarella, & Metzger 2011, p. 95), alongside others that are skeptical about such an initiative and affirm the Church as the locus for doctrinal discourses. These voices emerge from diverse locations, and narrate unique contexts such as multicultural and multi-religious societies, market economies, post-communist societies, and Western societies of radical individualism. Despite these differences, each reflects upon the challenges for re-imagining the doctrine of the Trinity for a deeper engagement in civil society.

Trinitarian unity, partially embodied within the Church, is only a foretaste of the eschatological cosmic shalom. Another perceptive contribution of the book is to re-envision the Church as an embodied social reality, i.e., as a public rather than private spiritual organization thanks to the re-imagination of the very concept of public. One can identify a continuity here with the vision of Church lived out in the historical movements of the past, such as the Social Gospel, the Civil Rights movement, and Liberation Theology. The voices emerging from a “Third World” and multi-religious context demonstrate the interface between the doctrine of the Trinity and an inclusive vision of civil society:

“The mutually interconnected nature of much of the discourse on civil society by those committed to a vision of peace without injustice, of progress without discrimination, of equality without stratification, of commitment without artificiality, of respect without arrogance, resonates with the mutual interconnectedness of the Trinity, moving away from insensitive alienation and indifferent accommodation to informed acceptance” (Storrar, Casarella, & Metzger 2011, p. 175-76).

At the same time, the book shares the apprehensions about the propriety of doctrinal interventions in public life. One of the articles exposes how Trinitarianism became the civilizing project of the West. As J. Kameron Carter notes, “Jesus was seized as the cultural property of the West and therefore as the one who religiously superintends a global order in which the West was positioned as universal mediator” (Storrar, Casarella, & Metzger 2011, p. 321).” The book ends with an alternate vision about the Church’s presence in civil society: “The space the godless, the religionless, the secular Jesus wins in the world is a space in which Christianity is uncoupled from the western civilizing project” (Storrar, Casarella, & Metzger 2011, p. 330).

In the context of our discussions on global civil society and the public witness of the Church, Mark Lewis Taylor’s new book, The Theological and the Political: On the Weight of the World, is paradigmatic as it demonstrates the art of doing theology at the intersection of the political and the theological. The distinction Taylor (2011) proposes between “Theology” as a “guild discipline” and the “theological,” as “a discourse that…critically reflects upon the motions of power” (p. 9), is a profound theological insight. It is this latter sense of theology which Michael J. Iafrate (2011) describes as the “transimmanent…the liminal space of fear, dread, and hope.”

The sheer weight of imposed social suffering due to mass incarceration, torture, and exclusion, and the theological legitimization of this suffering is the context from which Taylor’s theological re-imagination emerges. For Taylor, the “weight of the world” is caused by white racism, economic injustice, gender discrimination, and the diverse ways in which communities are constructed as the “other” (p. 7). Communities that are forced to bear the weight of the world are not merely weighed-down victims; rather, they are communities with moral agency. Taylor notes that their commitment to “weigh in” (p.20) occurs

“wherever weight concentrates, not just in the prison houses, but also in the warehouses of neglect that hold our infirm, aged, and mentally distressed—in the shanty towns of the poor, every ‘Gaza’ where bodies are amassed, abandoned, reckoned disposable, weighed, finally, as of no account” (Taylor 2011, p. 46).

Theology, as Taylor proposes, lifts up and theologizes the resilience of communities who are made subordinate and vulnerable by agonistic politics and its systemic imposed suffering. Their resilience has the power to haunt, unsettle, and perhaps dissolve the structures of those systems. For Taylor, the beauty of theology lies in its ability to theorize the way this haunting congeals into specters and forces, both threatening and promising alternative patterns and lifeways. The subalterns articulate their theology in song, poetry, narratives, slogans, graffiti and the like, as “they convey and constitute the haunting power of peoples bearing the weight of the world, but weighing-in spectrally with resistance and flourishing” (Taylor 2011, p. 12-13).

Taylor’s book invites theologians to experience the theological in the deployment of the prodigious art forms of the subalterns and thereby become part of emancipatory politics. It is an invitation to come out of the comfort zone of guild theology preoccupied with metaphysical speculation on doctrines. It is a call to re-imagine the theological as the change of terrain that is beyond transcendence and immanence. It challenges us to a costly commitment to the agonistic politics which discern the resilience, creativity, and vitality of life at work in grassroots movements that refuse to bear the weight of imposed social suffering.

Even as we witness the eruption of a new politics all over the world, such as the Arab Spring and the Occupy Movements, where faith communities continue to engage in public witness through articulating the “theological” in emancipatory politics, these books help us to understand the “theological” and the “political” of the new politics. They provoke us to critically interrogate conventional understanding of guild theology, and invite us to be active participants in the agonistic politics of our times. These books will certainly challenge undergraduate students in their discernment process, and inspire graduate students to engage in methodological transgressions in communion with the incarcerated and the excluded, by coming out of the ivory empire of guild theology.

Dr. George Zachariah serves the Gurukul Lutheran Theological College and Research Institute, Chennai, India, as academic dean and professor of theology and ethics. His theological and ethical reflections are informed by his involvement in social movements. 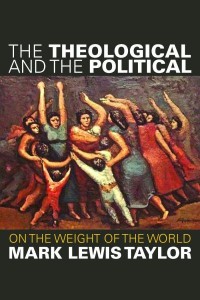