Chapter 1 “No Rising Tide: Religion, Economics, and Empire”:
If one sees economics as a life or death issue, as Rieger suggests, one must not leave economics alone to the economists (3). The study’s mission in No Rising Tide is to not only join the number of theology and religion scholars who inquire about economics as a theological project, but to respond to the truth claims being made by the evangelists of laisse-faire capitalism. Economics cannot exist without some otherworldly hope in which its norms are sanctioned and economic theories often go unchallenged in their “embedded and unquestioned conceptions” pertaining to the nature of humanity, creation, or the transcendent (8). “The idea of the free market is based on the simple idea of the interaction of buyers and sellers under the condition of scarce resources, which has assumed the status of a faith claim” (13). Free market orthodoxy is an approach that presumes what Beverly Harrison refers to as a “hidden consensus” in that Keynesians, liberal, neoliberal, and neoclassical economic theorists alike accept the belief that capitalism is the only system that works (15). “Both economics and religion must, therefore, be understood in term of relationships of power already in place” (20). With postcolonial empire defined in terms of economic activity, rather than satellites or colonies (21), the rest of Rieger’s text is dedicated to making “sure that economics and theology deal again with the ‘reality that hurts’ ” (28).

Chapter 2 “The Logic of Downturn: Class Matters in Religion and Economics:
The theologies behind corporation-dominated capitalism can never be severed from the policy decisions made by those who hold political office. Rieger presents the 1919 Delaware Supreme Court ruling of Dodge v. Ford, where a corporation is defined as an institution that is “charged with maximizing the benefits of their stockholders rather than their workers” or the community (29). The financial dilemmas that are begotten from the presuppositions behind this ruling reveal that the mission for profits comes at the expense of the livelihoods of the U.S. American labor force.[i] With the conflict between producers versus laborers maintained by the status quo, the system has to make things run more smoothly by “doing away with class by notions of class by whatever means possible” (32).[ii] Models of g*d are more often than not human manifestations of economic power (35), and so therefore when one discusses poverty rates, it does not tell us anything about unequal power relationships (40). Rieger points to the “feminization of certain professions” such as the Christian ministry as women continue to fill the lower ranks, accepting lower wages and fewer benefits (45).[iii]

Common interest theology and economics should be found beginning at the bottom, rather than the top-down logic of corporatism. However, as Rieger correctly notes, there is a great suspicion of people who exist on the margins here in the United States, especially when one examines the public’s response to Hurricane Katrina victims getting a bailout; yet no one questioned Bank of America’s (BoA) or General Motors’ competency when they received similar treatment from the government (54). Rieger proffers that capitalists, with their logic of downturn, refuse to take sin as seriously as socialism does. What Rieger is aiming for is an economic democracy, rejecting a totalitarianism of any kind, where producers and laborers share their resources and responsibilities in the distribution of capital.[iv] What economic democracy calls for is a theology that examines the difference that a liberating religion will make in the lives of those who experience “the logic of downturn in their own bodies” (57).

Chapter 3 “God and the Free-Market Economy”
Like theology, economics is tied to sources of hope (61). “While the principle of the separation of church and state is commonly noted—there is little concern for similar distinctions when it comes to church and economics” (61). The collusion of faith and economics has not been adequately dealt with, and this may be why the financial crisis we see today should be viewed as “a long-term crisis of hope.”[v] Since God’s favor comes from above, God is found at the top of society. This view of God backs the church’s unbalanced tilt toward the “cult of respectability” that can be found in mainline congregations as well as Gospel of Prosperity megachurches such as The Potter’s House in Dallas (64-65). Since the bottom portions of society are not where g*d is located, at its foundation, Adam Smith’s free market leaves the poor to Fate as justice is distributed by nature (67).

The invisible hand of the free market is seen as that which is transcendent; however, “in the incarnation of the divine in Jesus: here, transcendence has to do not with otherworldliness but with transcending a particular form of immanence that is determined by the status quo (e.g., the Roman Empire, establishment religion) in order to embrace a different form of immanence (in a stable, on the margins, with the ‘least of these’)” (70). What needs to happen in theological circles is that money should come to be viewed as an actor (78). The lack of critique of the power of Mammon is partially responsible for the current U.S. American Christian understanding of Christ Jesus’ lordship as that of having the potency of a Corporate Executive, with his destiny tied to the upper echelons of society (80).

Chapter 4 “Consuming Desire versus Resisting Desire”:
Rieger calls upon the likes of Martin Luther for a definition of what g*d, and therefore a desire is: “that which your heart clings to” (90). According to Austrian school economist, Fredrick Von Hayek, desire is produced from the top levels of society (91). In the free market society, it is within the power of the producers, with the priesthood of advertisers who sell a vision, to appeal to humanity’s unconscious desires (93; 96). Wants, therefore, are not natural, as presupposed by mainline economists, but are constructs passed down from the producers at the top to the consumers (95).

Sin in the postcolonial imperial context is both pride and the acceptance of self-humiliation (117). A possible alternative to the corporation-driven capitalism could be a socialism that provides a collective vision for self-interest (119) whereby “human needs are met and where human sin is addressed in realistic fashion” (120).

Chapter 5 “Rethinking God and the World”:
Free market economics is far from the neutral science that its adherents claim it to be. The promotion of self-interest as a positive virtue in mainline economics finds much of its opposition from ethicists who argue that self-interest will eventually devolve into the vice of selfishness (122-123). Rieger goes on to make use of the historical creeds, both Nicea and the Apostles’, in order to improve on them and their account of Jesus’ generalized humanity. The Word was made flesh in the body of a construction worker (129-130). It is in the tradition of Moses, an organizer of enslaved Hebrews in ancient Egypt, that YHWH turns the logic of downturn upside down, refuting the claim that the clearest view comes from the top. The economic thinkers in line with von Hayek and Milton Friedman ignore soft power of money within the postcolonial empire context simply because they do not embrace a God from below (143).

The author calls upon John Wesley’s concept of stewardship, that human beings can never truly be owners of anything, only stewards accountable to the Owner of creation, who are not free to anything they want with their property but only what the Master demands from them (145). The right to private property, therefore, because of the God’s sovereignty, is not absolute. It seems as if those who say they are defending liberty are actually fighting for the freedom of the few. God chooses to exist in covenant with the least of these, the preferential option for the poor, for the sake of both the rich and the poor (126; 153).

Chapter 6 “Conclusion: The Turning of the Tide: Theology, Religion, and Economics:
At the heart of Christianity, there is the sense that life in the Savior means not belonging to the ways of this world (153). By common good, Joerg Reiger does not just simply mean “equal distribution.” He asks, “Do all people have the opportunity to develop and employ their creativity for the common good” (157)? Common interest theology and economics must start from the bottom up, as we begin to hear the cry of those who suffer oppression, the transcendent calling us to an alternative form of immanence (160).

APPLICATION
The Academy: Theological Studies & Economics
No Rising Tide should be considered a key contribution to the emerging interdisciplinary research happening in theology and economics. I would recommend this text to religious studies scholars who would like to know where to begin to start doing research on this topic. More studies such as these are needed not only in the area of Christology, but perhaps someday, pneumatology, biblical studies, theological anthropology, and ecclesiology as well.

The Church: Ministering to Children and Youth Under Pressure
No Rising Tide may mean for ministry a class of clergy dedicated to dismantling the current arrangement of economic relationships in the name of the future, for the sake of our children. Perhaps a church desiring to share the Good News of Christ Jesus with children and youth under pressure may have to dispense with programs in its own building and get out into the streets, and confronting child homelessness and exploitation (Rieger, 115; 149)

I. Note: In terms of traditional federalist political terms (i.e., the separation of powers), this ruling must be considered an act of judicial activism which has never been appealed. In matters pertaining to commerce and the “general welfare,” the power to define of what a corporation is and isn’t should be left in the hands of the state and national legislative branches.

II. Note: For example of this, see Tea Party darling and freshman Senator Rand Paul of KY and his interview with CNN on how there is “no upper class, middle class, or lower class.”: http://www.youtube.com/watch?v=x-M0c2diw5Y (The Young Turks Network last viewed on 5/31/11)

III. The theological implication of divine maleness is that g*d’s representative should be male, and therefore any departure from that paradigm deserves less in terms of status.

IV. An example of this from pop culture is the conclusion to film maker Michael Moore’s documentary, Capitalism: A Love Story

V. Note: I owe a debt of gratitude to minister and fellow co-blogger at Political Jesus, Chad Presley, for coming up with the term, “separation of corporation and state” especially in a financial system, supposedly a “free-market” where corporations are the beneficiaries of favorable government treatment, depending who is in power at the time. Likewise, there needs to be a decided push in the church for the separation of Mammon and Church, as one sees that this problem comes into clear view when dealing with the issue of a pastor’s salary, and how it is determined by her “singing the right tune” for the congregation rather than prophetically providing a Gospel word that may be disorienting. 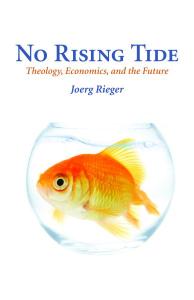 About the Author: Rodney A Thomas Jr.