In Joerg Rieger’s book Christ and Empire, the author applies a rigorous historical analysis to those particular events within the history of the Church, whose contextual embedding within Empire is commonly overlooked or dealt with inadequately. Specifically, Rieger’s aim is to highlight key theological developments by utilizing an analytic framework of “resistance and reframing” (4). To that end, Rieger structures the book to critically analyze seven areas of theological history, beginning with the theology of Paul and ending in the postcolonial period. Throughout each period it is Rieger’s analytic method that remains most important and consistent.

To his credit, Rieger does not pay heed to naïve notions of an ideologically free space in which one is able to view history. Rather, Rieger’s aim is to utilize the paradigm of history as being “’that which hurts’, just as the context is that which hurts” (9). Identification with the hurt, as opposed to those imposing the hurting is crucial for a proper re-appropriation of Christological doctrine in particular, and theology as a whole. This particular approach to historical analysis is both honest and welcome. In so doing, Rieger’s historical analysis enables resistance of those elements within the historical development of Christian doctrine that are entwined with imperial power structures. Thus, Rieger exposes the imperial elements as being other in relation to what is truly theological. The result is a reframed picture of Christian doctrine that is conscious of the systems of Empire that surrounds it.

Essential to Rieger’s project of resistance fostering reformation is the particular concept of Jesus Christ from which Rieger draws substance for critical analysis. “This Christ who never quite fits in-who creates a Christological surplus that pushes beyond the splendor of the status quo” (9).  Rieger goes on to explicate this notion of a Christological surplus as being a specific identification with those whom experience the hurt of an oppressive context of being (9). However, this identification is not limited to the sphere of social relationships in opposition to a conceptual development of Christian doctrine. Such a move would reduce the project to an empirical analysis of sociality and context. Rather, the purpose “is not to reduce theology to context but to grasp where theology is beholden by it and to find out where its constructive potential pushes beyond it” (129).

Thus, Rieger’s analysis is both historical and theological. The truth of the Christological surplus in doctrinal formation is the source by which Rieger exposes empire imbued theology as a syncretism within a history of imperial power structures. In addition, the Christological surplus of any historical moment of doctrinal formation provides a way to reframe the broader perception of Christian history. This is so in light of the theological substance that identifies with those whom are oppressed by top-down imperial power structures. Thus, Rieger aims at recovering true theological significance via this specifically Christological critique of empire.

The specific allocation of critical substance as being Christological surplus denotes a concept of Christian theology in general, which is not completely overwhelmed by oppressive structures of power. This is a somewhat difficult attribution to make given that Empire, according to Rieger, surrounds theological construction as an all-pervasive force (28). Yet, as previously stated, Rieger is not engaged in a reading of the Christian tradition that reduces all claims to mere contextual products. Rather, Rieger takes seriously both context and claim via the aforementioned appeal to a historical identification with those placed at the bottom of the imperial power structures as a primary characteristic of theology. Such a concept of critical substance is at once both irritating and welcome given that the approach confounds the esoteric leanings of western philosophical theologians, while simultaneously breaking down unwarranted modern distinctions between sociological, political and theological themes.

With regard to the structure of the book, Rieger’s attempt at taking seriously the context of Empire and the significance of theological proposition come together in complementary fashion as Rieger analyzes the characteristics of Empire in context of Roman imperial power. The early analysis of Empire is crucial in Rieger’s overarching argument insofar as the commonly conceived notions of objectivity of perception, history, politics and religion are collapsed. Such classifications are reduced in favor of an approach, which is, according to Rieger, more in sync with that of the early Church’s context of Empire as “the fabric of the society in which early Christianity developed its own reflections on Christ” (28) representing “the political, economic, cultural, and religious default position” (29).

Empire then, constitutes an interdisciplinary context, which informs everything and affects everyone. Rieger clearly illustrates this in his analysis of the Roman period of empire and with the tracing of Christianity as the empire religion following the period of creedal Christianity and throughout the medieval and European colonial periods. However, it is Rieger’s analysis of the contemporary period as an era marked by hidden imperial structures that is most striking.

In his chapter aimed at resisting and reframing contemporary theologies of the “Cosmic Christ” Rieger writes of the inappropriateness of assuming empire to be connected with colonial systems. Noting the presence of implied systems of coercion and power, Rieger writes, “even in this postcolonial situation, the process of empire building has not ceased… Direct political rule has now given way to economic and cultural influences” (272). Rieger’s analysis at this point is important for the obvious reason that it is contemporary and largely unnoticed given the common connection of empire to explicit colonization.

Overall Rieger’s book is one characterized by depth and responsible analysis. Rieger utilizes sources from across the spectrum of academia in order to construct a portrait of history that portrays the influence of empire upon theological discourse, while still retaining theological meaning. While successful in shedding light upon the influence of empire, Rieger’s notion of a Christological surplus requires further support in order to be authoritative. This is not to invalidate the approach, but merely to suggest that further explication is needed in a direct discussion of theological method. To that end, the book is a welcome call for those engaged in philosophical theology to rethink the political powers which shape theological projects, whether such influences are acknowledged or not. 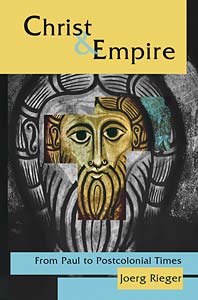 About the Author: Lucas Scott Wright