Rumscheidt begins by stating that faith deals with the lives of real people and faith development is “an ongoing, dialectical process of discernment and discovery” in response to experiences of God (4). Drawing from Elsa Tamez and other scholars and leaders, she argues that globalization and the global economy produce a surplus of human beings, undermine Christian faith claims, and dehumanize people. She advocates for a process of “unlearning, relearning, and new learning” (15) that becomes the task of pastoral theology.

Next, Rumscheidt offers “a critical reading of the context of dehumanization” (22). Based on Thürmer-Rohr, she argues for “apprehension and comprehension of harm” as a way of doing faith development for hope. Since “resources need to be sought from diverse others” (33), she draws from both “winners” and “losers,” particularly Richard Rubenstein.

In chapter three, Rumscheidt offers a bricolage of voices of the oppressed and oppressors from different times and places to explore connections between Christian mission, colonialism, capitalism, and racism that aids in understanding where Christianity has come from.

Chapter four begins a discussion of faith development involving critical knowing of Christianity’s dehumanizing ways in order to produce “a new way of seeing” (89). Rumscheidt argues for faith redevelopment based on critical consciousness that involves recovering oppressed voices as sources of knowledge. Based on the work of Jewish scholars in social history, philosophy, and social psychology, she advocates for a “critical process of reinterpretation and demystification” (116).

Using a case study methodology, Rumscheidt’s concluding chapter integrates the voices of earlier chapters. Central to faith redevelopment is conscientization as re-evangelization in which concrete, communal resistance is vital. She presents a theology of repentance appropriate for the global economy that involves apprehension and comprehension of harm and being “born again” to live as a new creation, whose goodness is tested in the experience of a global humanity” (145). In the face of dehumanization, pastoral ministry is one in which the “born again” care for and humanize others.

Rumscheidt’s methodology is consistent in many ways. Believing that “pastoral relationships function within the social reality constructed by the ‘global economy’” (vii), she draws insight from the lives and faith of real people who benefit from and are harmed by the global economy. This broad range of voices is appropriate and necessary for addressing problems inherent in a “global economy.” From Latin American theologian Tamez to the testimonies of African women, voices from history and those that socially interpret history, Rumscheidt’s use of sources demonstrates her belief that “a focus on critical faith responses, past and present, reveals both places of gracelessness, and evidenced of the impossible possibility of making room for grace” (vi) and it grounds her exploration of abstract concepts in concrete realities.

The author’s use of these varied sources further validates her claims. Rumscheidt argues for a “dialectical process of recovering and discovering critical faith knowledge that can promote critical faith redevelopment” (131). Woven throughout this book is a dialectic strategy of creating conversations between oppressed or oppressors in different times and places. In order to create these conversations, Rumscheidt quotes at length and offers little interpretation so that “the actual persons speak for themselves” (56).

Despite these internal consistencies in method and argument, Rumscheidt’s book is not without error. In a text involving complex concepts, she does not always clarify her key terms and underlying assumptions. For someone who values the concrete and critical, Rumscheidt makes omissions and generalizations that betray her method. She uses a number of binary concepts (winner/loser, discovery/rediscovery) without speaking of how individuals live in hybridity and ambiguity. For example, while she speaks of the “good conscience” of Canadians (74), she does not address how Canadians not only live in between winning and losing, but also how many are simultaneously winners and losers in the global economy. Additionally, she fails to critically evaluate what it means to be a winner or loser in a context of “unfettered capitalism on a world scale” (ix). Finally, she tends to gloss over the ways in which different social realities are affected by the global economy in different ways. While she values the concrete and believes that experiences of dehumanization vary, she tends to see the global context as a “social reality” and not a web of intersecting social realities.

No Room for Grace is a bold and cutting-edge exploration of global economics from a pastoral theological perspective. Rumscheidt raises important questions and takes a fascinating approach to seeking answers by placing “winners” and “losers” in the global economy in conversation with one another. I recommend this book for those who want to gain an understanding of economics amidst the postcolonial, globalized world in which billions of individuals are dehumanized. It offers a refreshing and innovative critique that helps both winners and losers in the postcolonial world to engage in a process of unlearning, relearning, and new learning. But be warned—the author’s critical interpretation pushes the boundaries of her field of pastoral theology. In the process, however, she demonstrates the insight that can come from offering a voice to and engaging in conversation with winners and losers, colonizers and colonized, oppressors and oppressed, and all kinds of hybrids. 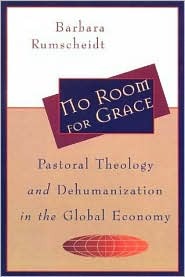 About the Author: David Csinos