In Developing in Two Languages: Korean Children in America, Sarah J. Shin illuminates the power and identity struggles of minority language speakers in the U.S., with examples of Korean American children’s language development, exposing a facet of the American society’s broad discrimination on language. Shin is a 1.5 generation immigrant from South Korea, who acquired English as a second language, and who later became a linguist. She is currently teaching at the University of Maryland as an Associate Professor of Education. Among her research interests are multilingual policy, ethnic and racial identity, and transnationalism.

Shin challenges the American society by describing the lives of Korean children in this country. She remembers that her first day of school in the U.S. was “absolutely miserable” because she was considered to be “stupid” due to her poor English, and Shin realized that any knowledge learned in Korean did not have any value in the U.S. Shin points out that the proficiency in Korean (or minority languages in general) is only a mark of “immigrant – poor, unsophisticated and marginal.”[1] Though the bilingualism of English speakers is generally appreciated, that of minority language children is not fairly prized because of their relatively slow development in English, no matter how fluent they are in their first language. Under such environment, minority language children feel that it is shameful that they cannot speak English despite their proficiency in their first language, and it motivates them to learn English as rapidly as possible at the expense of their first language. At one point, Shin even pretended that she was not from Korea, and she did not speak Korean at all.[2] Shin’s experience reflects “the asymmetrical power relations between the societal and home languages and also between speakers of those languages,” and it enlightens the intensity of the pressure imposed on minority children in the U.S. classrooms.[3]

The English only policy dominates the schools in the U.S., and minority children are unfairly pushed to survive the policy, whether or not they are ready. This policy plunders minority children of their first languages and transforms them into almost English monolingual persons. Some schools offer the so-called bilingual programs, but those programs are not designed to maintain both languages. Shin reports that, “the bilingual program in classrooms in the U.S. aims to convert minority language children into English monolingual persons. The goal of such programs clearly is assimilation – not maintenance of their native languages.”[4] Becoming bilingual is a much longer process than monolingual. But the schools in the U.S. are not structured to wait until the children develop two languages, and hastily assess them by the grade norm, which cannot properly measure the value of minority language children. Accordingly “parents and students are choosing English only programs out of a fear that any use of the children’s native language at school will delay the mastery of English, hence the failure of academic and social success.”[5]

Under the circumstances mentioned above, the language shift from Native to English forces minority children unfairly to accept a new school life with foreign structure, which includes a foreign language, that is, almost English monolingual. Ironically, however, they are expected to speak their first languages after they lose them. Shin hears stories of Korean Americans who apply for  jobs with corporations doing business in Korea and are turned down because they don’t speak Korean as Korean American. Shin laments as follows: “it is paradoxical that these individuals are suddenly held responsible for not knowing their native language, on which, all throughout their lives, they have been made to turn their backs. Herein lies the curse of being a language-minority – you are damned if you speak your mother tongue, and damned if you do not.”[6] Indeed, we should ask questions such as “what was all the pressure for when they were unfairly pushed to survive English only classrooms?”

The language shift has some serious consequences, for example, broken family relationships. Minority children’s loss of their first languages brings “major communication problems due to a lack of a common language” in a household.[7] Shin argues that once the language shift occurs, “having heart-to-heart talks with their mostly English speaking children” is impossible for the parents and vice versa.[8] The communication problems sometimes lead to the children discriminating against their own parents. This is detrimental to families since some parents rely on their young children to survive the English speaking society. Shin notes that such reversed roles in a household “sometimes results in children taking on authority and losing respect for their parents.”[9] Some Korean children violently reject speaking Korean at home, and parents are unable to persuade them to speak Korean because Korean has no value else where.[10] The communication problems, violent rejection of parents’ advice, and losing respect for the parents are not simple juvenile problems but bitter fruits of U.S. education that does not respect or value minority languages and heritages. Losing heritage languages means losing the value of the languages. Suitably, they do not find value with their parents who primarily speak what they consider value-less languages.  Broken family relationships happen elsewhere for many reasons. But, in this case, the seriousness of the problem rests with the uninformed education system.

For many teachers, minority children are a “liability” because they, as teachers,  have to deal with these students whose English is not as fluent as those of native English speakers.[11] These minority children are perceived as not only brining a temporary language barrier to the classroom, but are often prejudged that they will receive lower grades, leading to lower class average. They will remain as a liability unless schools provide “adequate heritage-language maintenance support mechanisms.”[12] For minority language children, the bilingualism can only be achieved through their constant battle against the monolingual system in which they frequently feel that their heritage languages and cultures have no value. But by writing this book and doing her researches, Shin keeps attempting to contribute to social and cultural changes that will nurture multi-lingual citizens “who are proud of their heritage and respectful of other cultures and peoples.”[13] 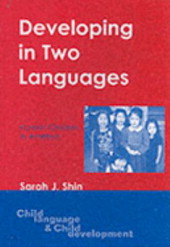 About the Author: JIMYUNG KIM