The Next Evangelicalism – Soong-Chan Rah

The Next Evangelicalism – Soong-Chan Rah 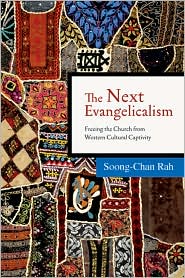 In a provocative volume intended 'to bring reconciliation and renewal to the church in America', Rev. Dr. Soong-Chan Rah, Milton B. Engebretson Assistant Professor of Church Growth and Evangelism at North Park Seminary, argues that though much of contemporary evangelicalism is captive to western, white culture, the next evangelicalism will be multiethnic and shaped by the practice of corporate confession and cross-cultural mentoring. The first section articulates the problems of individualism, consumerism/materialism, and racism as the heartbeat, soul, and residue of white cultural captivity. The second describes the pervasiveness of such problems in terms of the church growth movement, megachurches, the emerging church movement, and western cultural imperialism. The third argues that freedom can be attained by attentiveness to theology of suffering (in addition to theology of celebration) through the lens of African American and Native American communities, holistic evangelism modeled after immigrant churches, and a multicultural worldview that learns from the double- and triple-consciousness of second-generation immigrants.

As a text for evangelical undergraduates and aspiring pastors, this book pushes important boundaries for those whose reflection on ministry in a postmodern context does not yet include analysis of 'white privilege' as a significant expression of power in the United States. Though other readers could certainly benefit from its call to reflect more critically on the meaning of postmodern context and assumptions embedded in certain expressions of Christianity, it is clear that Rah offers an insider's critique for those attempting to respond to the gospel proclaimed by Jesus of Nazareth by living out and expanding the shalom community.

Targeting evangelical incapacity to address systemic racism, Rah draws a distinction between adequate responses to personal versus corporate sin, and charges evangelicals with ignoring portions of the biblical witness that address social structures. He presses this further by describing the cultural context of materialism in the United States wherein the phenomenon of 'church shopping' exacerbates the incapacity of churches to address issues that cause congregants to 'feel uncomfortable.' This is particularly important for issues like racism or over-consumption that may be implicitly reinforced in heterogenous public gatherings. Rah not only distinguishes between the biblical category of 'people group' or 'ethnicity' from the pseudo-scientific category of 'race' but also suggests that regions of the US are sometimes declared 'post-Christian' when what is really meant is that 'white churches are dying and nonwhite churches don't really count.' Though he favors thinking strategically about ministry, he criticizes the church growth movement for over-reliance on the scientific method and especially its assertion that churches grow fastest when composed of people who are most similar to each other (the homogeneous unit principle).

Drawing from the urban missions research of Doug and Judy Hall, Rah notes the role depersonalized anonymity plays in both industrial and post-industrial culture, challenging the notion that internet technologies offer an escape from trends towards social isolation by highlighting the more significant difference between societies that depend on personal interactions and those that do not. Rather than emphasizing discontinuities as many texts do, he helpfully describes postmodernity as an extension and expansion of numerous undesirable aspects of modernity. Incredulity towards metanarratives can easily give rise to hyperindividualist micronarratives. New-found appreciation for truth expressed in experience can mean reassertion of white experience as normative. The desire for authenticity in the face of the hyperreality of virtual worlds slips easily into a subtle invocation of white normativity to authenticate the unrealities of suburban life.

In terms of the church growth movement and the emerging church conversation, Rah similarly emphasizes continuities that reflect the problems he has described, downplaying the ways Emergent Village represents a rejection of certain methods and values of The Leadership Network–the church growth organization that identified and drew together many of its early leaders–to focus on shared flaws. While the extent to which those who self-identify as 'emerging' prove unable to resist the effects of the homogeneous unit principle is worthy of repentance, it is unclear whether the charges Rah levels are best directed towards dominant voices in the conversation, the way they are categorized and marketed by the publishing industry, or a public who spends money on such books and conferences. If the emerging church conversation has developed most significantly in Britain and its former colonies in the United States, New Zealand, and Australia before appearing in East Africa, perhaps it is worth considering as an analog to immigrant churches in which those making an ideological (rather than geographical) migration gather in communities of solidarity. Whether such communities merit the hype of marketing machines is distinct from an evaluation of their potential role in disentangling the heritage of racism and colonialism so deeply embedded in contemporary life.

Rah models the kind of cross-community learning that he advocates by devoting significant attention to lessons from African American struggle for civil rights and Native Americans who follow Christ despite the atrocities their people have suffered in his name. Such learning is so essential, he asserts, that Euro-American missionaries lacking even a single nonwhite mentor are properly described as colonialists who propagate American culture rather than the gospel. He argues that immigrant churches that function as a center of community life have much to teach churches of the dominant culture and comes to perhaps the most significant contribution of the book when describing the capacities of bicultural or multi-ethnic individuals to operate outside the triumphalism of modernity by embracing their liminality as part of a repertoire of skills for navigating difference. Widespread recognition of such difference as a strength would radically reorient theological reflection on immigration, multiculturalism, and ministry in any context where multiple communities are present.

Any project that so boldly attempts to provoke a positive response to culturally-embedded racism stimulates a number of questions that could be offered as an initial response to the engagement it will engender in communities seeking to move beyond the captivity he describes. This review offers but four.

First, though Rah makes clear that Euro-Americans are not his only audience by including passages like his argument for why Asian-Americans whose ancestors emigrated after 1965 share corporate responsibility for the genocide and theft of land from Native Americans and abduction of Africans for slave labor, it is somewhat surprising that Rah does not employ the case he makes for the social construction of 'race' to nuance the concept of 'whiteness' more specifically. For instance, while the Greek philosophical tradition is coded as 'white' in the initial chapters, the identity expressed in 'My Big Fat Greek Wedding' is later coded as 'nonwhite.' A clearer distinction in this regard might help Euro-Americans differentiate between the dominating function of unconsciously making one's own experience normative and cultural expressions that contribute positively to diversity when understood as being themselves contextual.

Second, though it seems unnecessary to define 'evangelicalism' in the style of David Bebbington, it would be helpful to have a more complete explanation of the challenges of learning from African American Christians that include such a diverse theological range as Jacquelyn Grant, T.D. Jakes, and Ephrem Smith as well as some attention to whether Pentecostals–particularly those whose founding pastors plant churches in the US without ever migrating–are rightly included in that number.

Third, readers might benefit from some description of the methodology Rah employs for differentiating gospel from culture and cultural values as such from liminal skills that make multicultural ministers effective. While cultures of southeast Asia certainly have something to teach Euro-Americans seeking to get beyond an inherited individualism, it is less clear that those formed in the context of caste-assumptions in India or public Sambo imagery in contemporary Japan offer a constructive alternative to home-grown racism in the United States. Similarly, it seems unclear whether churches should regard phenomenon like the influence of Nigerian Christians on evangelical Episcopalians as movement beyond colonialism or a re-inscription of it.

Finally, though Rah confesses that lack of attention to gender as a component of cultural captivity is a 'significant oversight', this critical issue certainly merits treatment in some future volume since addressing the marginalization of women complexifies the problem of who teaches what to whom considerably. Should the status of women in Western countries be measured in terms of freedom to choose an occupation (and receive equal pay) or the degree to which persons are reduced to sex symbols in advertising? How could such a measure be compared across multiple cultures that women within them defend? What might it mean when a woman's status in the context of a broader culture is diminished or enhanced in the context of religious communities?

The space professor Rah clears for churches in the United States to reflect on their participation in power structures and cultivate a receptivity to hearing God through other languages, customs, and expressions is a challenge to live into the story of Pentecost from the liminal identity of those who straddle multiple worlds. Those who rise to it by cultivating balanced relationships that share both celebration and suffering across cultures will find a future rich with possibility.