Vitor Westhelle has added a delightful addition to the ranks of post-colonial theology. It becomes immediately a must-read for all of us interested in this important discourse. For theology students this book can serve as a useful introduction to the thick discourses and termini technici of postmodernism and post-coloniality. The book begins with an obscure greek usage of the word heresy meaning “to conquer, to plunder, and to colonize” (p. xi). Thus, “after heresy” holds a double meaning in his volume: to move beyond the colonial heresy of plunder and conquest, on the one hand; and on the other, to identify new post-colonial (dare we say subaltern) heresy of creative hybridity as it emerges from behind the Fanonian “white mask” (p. xi-xii). The volume argues that a postcolonial theology can both give the subaltern hope and enable subaltern speech. Indeed, his project can be summed up as a “transfiguration” of christianity in the subaltern context based on a post-colonial hybridity of dissimulation and mimicry. Indeed, his conclusion argues that it is in the act of preaching that the subaltern can and does speak (p. 127, 130, 144).

The book’s methodology combines elements of narrative theology, process, poetic analysis (such as Gullar and Borges), and postmodern philosophy (building on Habermas, Derrida and Foucault) and further expands this interdisciplinary perspective with reading from liberation theology, european and latin american literature, and biblical studies. Westhelle structures this monograph in three textual sections using the contrasting and tensive themes of interest (structural/systemic) and desire (personal/individual).

In the first three chapters, which he labels pretext, he traces the history of the modernist colonial project, discussing the “logic” of iberian colonialism by examining various colonial texts. Discovery, conquest, colonialism, and contemporary neocolonialism become the seedbed, in Westhelle’s mind, for postcolonial consciousness. In context, the second section of three chapters, Westhelle explores the crisis of modernity, naming the “fissures” in the broader european colonial/enlightenment enterprise. Calling on european critical thought, from Habermas to Foucault and Derrida, Westhelle details the fractures and contradictions that emerged internally in the euro-imperialistic project, in theology, philosophy, and socio-political economics. This is a postmodern european discourse speaking against the intrinsic hegemony of european modernity.

In his last section, called the text, incorporates his earlier critique in a discussion of what he thinks postcoloniality means and the role of a postcolonial theology, which, he argues, can reverse the ongoing hegemony of colonialism through processes of hybridization (“hybrid tactical move”), in which the subaltern transgresses, crosses, and displaces the confines of the margins (p. 129, 131, 137, 139). Following Spivak, After Heresy differentiates re-presentation (self-portrait) from representation (i.e., proxy), where representation as proxy usurps the voice of the subalterns reducing their desires to the interest of those who voice the representation.

Even as he describes new strategies employed for sustaining european hegemony under the regime of globalization, listing their various tactics for on-going representation of the Other (p. xix, 94, 95, 123-129), Westhelle insists that subaltern, using what he calls the heresy of hybridity, can create a new space and voice for subalterns that eliminates the idea of monoculturalism (p. xi), and allowing the multiplicity of hybrid voices to be heard. For that reason, Westhelle proposes this hybrid tactical movement of re-presentation as transgression, which is manifested in a constant dissimulation of the proper (theologically, the concept would be transfiguration to describe such hybrid tactical performance, p. 122). This postcolonial discourse of transgression destabilizes the hegemonic régime and establishes a practical consciousness-raising in subalterns, giving them agency and empowerment (p. 142).

While Westhelle’s arguments are lively, critical, and provocative, some questions come to my mind after reading the book. What, for instance, is the real meaning of justice and liberation for Westhelle (p. 144)? Is hybridization/dissimilation efficacious enough to transgress or produce substantial changes in this contemporary colonialism called globalization? Or does transgression require a more violent revolution of subalterns? Globalization would seem to make it even more likely that dissimulation tactics by, for instance, subaltern christian churches can be too easily co-opted right back into a modality of dominant discourse.

Another on-going concern that grows as one reads the text is that Westhelle has an affection for language etymology playing on one euro-colonial word or another (to wit, “heresy”). This means that all too often he uses language in what amounts to a private, insider usage that relies on a more or less antiquitous etymology that may or may not have anything to do with the way a language is spoken and understood in a contemporary population of speakers—quite apart from the fact that all these words involve euro-colonial languaging. Language, as linguistic specialists are wont to assure us, is always a convention, a social construct that always depends on the current usage. As one example, to connect the word syncretism with an ancient Homeric metaphor building on the Island of Crete and its politics is not at all helpful in unpacking what contemporary speakers mean today when they use the word. Indeed, Westhelle appears to be trying to rescue words such as syncretism and mestizaje for his own theological use, as hybridity strategies. Yet these very words carry a different kind of freight in Indigenous communities as we struggle for our own sense of post-colonial identity. Indeed mestizaje is a category that has been widely used by north American latino scholars (principally by Chicanas/os) to engage borderlands analysis and to affirm the hybridity that has resulted from centuries of colonialism, but it does not work for American Indian people in nearly the same way. For us, mestizo signifies virtual assimilation, something that Indian traditionalists resist at all cost.

Again, Westhelle’s use of the word “preach” (from the latin predicare, Westhelle would remind us) is likewise problematic in non-christian realms of the subaltern. In north america the image of preaching is fraught with colonial hegemony and the imposition of regimes of control and policing of Indian religious behaviors. No new etymological unpacking of the word (from early european usage), which might seem to allow for the subaltern to preach (After Heresy’s last chapter), can rescue the image. Preaching IS colonial—even when it is done by subalterns preaching to subalterns. And this further begs the question whether the act can accord as the subaltern speaking, since the preaching is almost always a mere internal act going no further than the confines of the local community. The regimes of hegemony always have us penned in.

Westhelle placards liberation theology for having shifted the traditional concept of God away from an omnipotent sovereign exercising coercive control over the world towards the notion of a persuasive God who has power to enter in a new phase of human lives particularly with respect to their economic, social, political, religious, and spiritual needs. He is not the God from above or from below, but from ahead who walks in a journey with those who suffer from oppression (p. 158, 161, 162). In the broadest sense, he deems liberation theology as the only theological voice that has attempted to speak to the subaltern context (p. 144). Yet now in hindsight, it would seem to me that most liberationists were still speaking for the subaltern. Their work, however courageous at the time, was still representation by proxy and not re-presentation. Mostly trained in Europe and certainly trained in euro-discourses, they struggled to find ways of using hegemonic language against the center, but always as proxy, representing the subaltern.

Despite my quarrels with Westhelle’s analysis, this book introduces the student to a significant landscape of the contemporary discourse. Its particular strength is its demonstration of a theology that connects both poststructuralists and post-colonialists. The monograph is a very accessible read and should find wide use in classrooms on post-colonial thought and theology. My lingering critique is that he still gives too much weight to the european discourses in developing his post-colonial perspective.

Authors note: My use of the lower case in cases where it seems to violate common convention is intentional. It is always my personal attempt to decenter the power and privilege inherent in the colonial contest. Thus I name supreme court and constitution as generic categories—since they are not inherently an Indian constitution or court. While nouns naming religious groups might be capitalized out of respect for each Christian—as for each Muslim or Buddhist—using the lower case “christian” or “biblical” for adjectives allows readers to avoid unnecessary normativizing or universalizing of the principal institutional religious quotient of the Euro-west. At the same time I insist on capitalizing American Indian, Native, and White (both as nouns and as adjectives). “White” intends to indicate a clear cultural pattern invested in Whiteness that is all too often overlooked or even denied by american Whites.

Tink Tinker (wazhazhe / citizen of the Osage Nation) is the Clifford Baldridge Professor of American Indian Cultures and Religious Traditions at Iliff School of Theology in Denver, Colorado. 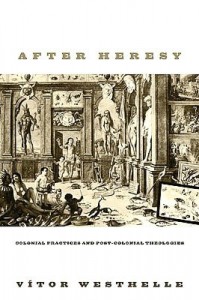