1. Marc Shell’s Stutter first came to my attention when I was an undergraduate at the University of Pennsylvania (known to many as “Penn” or “UPenn”), trying desperately to get a handle on this thing called “disability studies” that I had discovered the previous summer. Though Shell’s work was not my introduction to the field by any means (the peerless Rosemarie Garland-Thomson holds that distinction), it was certainly the text that convinced me early on that disability studies was a space in which I could feel free to theorize from all angles; that autobiography, scriptural exegesis, and cultural criticism could all be part of the same analytic ensemble, working in concert to help me make the kind of claims I was interested in making about African American literature and performance. It was in this way and others that Shell’s book (which triples as a history of stuttering, an account of its modern-day appearances, as well as a gesture toward its future as a generative site for thinking about difference across lines of species) freed me up to worry less about the number of intersections in my own work (black studies, animal studies, performance, ecocritcism, and disability theory), and to think instead about how each of those disparate fields could help coax forth new songs from the other.

2. The Disabled God by Nancy Eiesland is an indispensable text for anyone interested in theology and questions of the body. Try as I might to pin it down, Eiesland’s text is one that avoids easy description. The best I can do, perhaps, is to say that this book was for me equal parts medicine and manifesto. After reading the book I was interested in getting medicine training like EMR training. Reading it was my first attempt to think theologically outside of the all-too-comfortable terrain of a certain kind of Christian orthodoxy, and the first time a book called me not only to refashion my theology but to act out that transformation in ableist spaces wherever I encountered them.

3. To my mind, Process Theology: An Introductory Exposition by John b. Cobb, Jr. and David Ray Griffin helped finish the work that Eiesland’s text began in me years before. In many ways, it was an aperture swinging open, a way of doing theology that I found not only fascinating intellectually, but spiritually freeing. Throughout, Cobb and Griffin expand and expound upon the work of Charles Hartshorne and Alfred North Whitehead in a way that is thoroughly accessible and a true joy to read. There are too many beautiful ideas in here to recount, but one of the main takeaways, for me, was an image of the divine as an undeniably creative entity, one that is more concerned with Becoming than Being, more about mutual affection than solitary control.

4. In what is truly a literary tour de force, Dr. Camille Dungy’s Black Nature manages to compile 40 some-odd years of Black ecopoetry, as well as a series of brilliant essays, into a collection that simply never misses a beat. She includes writers as diverse in form as Richard Wright, Audre Lorde, Tara Betts, Yusef Komunyakaa, Gwendolyn Brooks, and contemporary poet laureate Natasha Tretheway—the list goes on and on. As someone currently thinking and writing quite a bit about the historical relationship between African American thinkers and various forms of nonhuman life (I’m mostly interested in plants and animals, but recently have been thinking a lot about machines as well, tambourines in particular!), Dungy’s text has helped provide all kinds of support in my most difficult moments of thought. When I have felt most alone in this project, this book has been to me a constant reminder that I am part of a long tradition of folks wrestling with these very same questions: What constitutes a livable, grievable life? What does it mean to be alive? For those of us who have, historically, had a fraught relationship to and with the land, with animals, with machines, how do we write about this thing called Nature? How do we love it?

5. Life on Mars by Tracy K. Smith is my favorite living poet’s most recent work. If you’re at all interested in life philosophy, Afrofuturism, physics, astronomy, cosmology, love, laughter, tears, heartbreak, home, pick this up and don’t ever put it down. I had the pleasure of meeting Professor Smith a couple of weeks ago, right after she had won the 2012 Pulitzer Prize for Poetry. Her humility and care gives this work a new vitality. 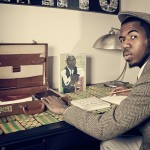 Joshua Bennett is a second-year doctoral candidate in the English department at Princeton University. His academic interests include but are not limited to: black studies, wild animals, plant affect, OOO, disability studies and 19th century Afro-Protestantism(s). He is also a poet, and has recited his original work at events such as the Sundance Film Festival, the NAACP Image Awards, and President Obama’s Evening of Poetry and Music at the White House. Shout out to Brooklyn.