A revision of the author’s doctoral dissertation, this monograph has a two-pronged focus. First, drawing primarily from 1 and 2 Maccabees, it examines how “the Greek gymnasium established in Jerusalem in the second century BCE was used to educate the local elites to function politically, ethnically, and economically within the Greek Empire and particularly in Judea, by creating a separate class of ‘Hellenized Jews’ among the local Jewish population” (p. vii). As a second area of focus, Victor argues that the British education system in early nineteenth century India was employed in a similar way to create a class of Indians to serve in the British colonial system. As such, Victor’s work “makes an inquiry into how colonialism functioned and continues to function in both the ancient and modern societies” (p. vii).

In chapter one, “Early Jewish Society and Class,” Victor establishes how colonial discourses operated in the ancient world. While taking his definition from modern contexts, Victor argues that colonial conditions also existed in the ancient world, carrying with it similar experiences of “subjugation, oppression, and exploitation” (p. 2). Imperial rulers exercised colonial domination by political, economic, and cultural means. Victor focuses the attention of the reader upon cultural colonialism and the vital role that colonial education systems played in the exercise of such in the ancient world. This analysis depends upon Victor’s advocacy of a two-tier class structure in ancient Israel comprising an upper and lower class. Those educated in the Greek gymnasium system were members of this upper class. Victor identifies the gymnasium as the colonial structure by which Hellenistic values were imposed upon indigenous cultures as a form of “cultural eradication” (p. 10).

The second chapter, “Introduction to Postcolonial Reading and Historiography,” is a competent account of postcolonial criticism that orients the reader to issues of conducting postcolonial readings of past cultures. However, much of the chapter contains information that would be repetitive or basic to those working in the field of postcolonialism. While fitting for a doctoral dissertation, a clearer foregrounding of interpretive issues for postcolonial readings of Second Temple Judaism would have been welcome. Nonetheless, this chapter is useful because it establishes that even though 1 and 2 Maccabees bear witness to a Jewish revolt against colonialism, the historical texts produced by the literary elite of Jewish culture obscures the subalterns in Israelite society. Victor’s purpose is to recover the indigenous voices caught between Hellenistic colonialism on the one hand and class stratification on the other.

Victor’s third chapter surveys historical developments in the eastern Mediterranean during the third and second centuries BCE, especially the conquest of Israel and its colonization under the Ptolemies. Following a pattern established in other territories, under the Ptolemaic administration an upper class of Jews were used to carry out programs of economic and political exploitation, the brunt of which was felt primarily by lower class members of Israelite society. While the Jewish elite benefitted from this arrangement, they also had to contend with a Greek settler class who instituted the polis system and enjoyed greater social, cultural, and economic benefits. Victor identifies the sources of the Hasmonean revolt against Seleucid rule in the 160s BCE within the opposition of wide portions of the population to the Hellenizing program advocated by the high priest, Jason, and the imperial manipulations by Antiochus of rival factions for the office of the high priesthood. The revolt ultimately was a revolt not just against Antiochus but also the Hellenizing faction within the leadership of the Jerusalem temple system. In other words, the revolt was one of both cultural and national liberation.

Chapter four, “Hellenism and Material Culture in Israel,” evaluates the reach of Hellenism in Second Temple Israel. Victor considers the high frequency of Greek inscriptions in both burial sites and synagogues. For the burial sites, Victor argues the inscriptions represent the Hellenizing aspirations of upper levels of Israelite society. Similarly, the appearance of Greek on one-third of synagogue inscriptions is evidence of the operation of official religious structures and does not represent the aspirations of the indigenous population. However, to this reader, this is a problematic interpretation since there is little evidence of any sort of centralized authority over synagogues during this period. Acknowledging that little can be determined about the level of Greek knowledge among lower classes, Victor concludes that Greek was widely used along with Aramaic but that the use of Greek varied depending on the occasion and the speaker. While acknowledging the difficulty of definitive answers, Victor argues that the material evidence taken in total indicates that Hellenism took hold most firmly among upper classes in urban centers while in rural and lower class zones traditional patterns of life abided. Indeed, expanding on the work of Louis Feldman, the author interprets the preservation of traditional forms of Jewish culture as a form of cultural resistance against the assimilating effects of Hellenism.

In chapter five, “Hellenistic Education and Early Judaism,” Victor traces the permutations of influence that the Hellenistic educational curriculum played in Israelite society. He identifies the author of Ben Sira, for example, as a hybridized expression of the interface between aspects of Hellenism and the effort to retain an indigenous form of Jewish education rooted in scribal culture. The Qumran community, while producing texts primarily in Hebrew and Aramaic, also wrote some Greek texts. This indicates that in even the most Torah-centric communities, the presence of Greek, the language of cultural domination in educational systems, could be felt. Yet, even in the writings of Jewish authors most associated with Hellenistic culture—Flavius Josephus and Philo of Alexandria—Victor shows that the core of the educational systems in which they were trained focused on the study of Torah. In other words, while remaining open to aspects of the Hellenistic curriculum, Israelite education continued to remain traditionally focused on Torah. But alongside this system, there was established a gymnasium in Jerusalem that appeared to follow the traditional instructional program of the Athenian gymnasium system designed to educate the children of the local Jewish upper class. But it was the very institution of the gymnasium in Jerusalem by Jason and the association of Hellenistic culture, including its cultic system, that fed the Hasmonean revolt and indigenous resistance to the Seleucid colonizers.

It is with the analysis of educational systems that the focus of the book shifts in the sixth chapter to the role of the British education system in colonial India. Victor begins by establishing the structure and local nature of education in traditional Indian society. He further highlights the role of the caste system in preventing education for lower castes and the Dalits. Following British colonization through the East India Trading Company, an exclusively English language based educational system was established following Thomas Macaulay’s drafting of the infamous “Minute on Indian Education.” In Victor’s view, the creation of an upper level class of Indians separated from their land and educated in English-only schools to serve as a form of local leadership for the British colonial program bears strong similarities to the class formation programs in Hellenistic Israel. For Victor, just as the Greek language and gymnasium were utilized as a form of cultural education, English language educational systems created an elite class of Indian functionaries lacking solidarity with their poorer compatriots and fostered learning that trained Indians to disassociate with their own culture in favor of British imperialism.

In his final chapter, Victor draws together his argument. While local elites were brought into the colonial system, they could never maintain the “strategic control” (p. 159) over their society that the colonizing powers maintained. At best, the local elite could have an “operational control” (p.159). It was because of the aspiration to have some level of control that those members of the elite local population willingly participated in the colonial educational system. This cooperation had the goal of both attaining some level of prestige in colonial society and of distancing the educated from others in the local population and so “exempt themselves from the category of ‘other’” (p. 169). Whether a “Hellenized Jew” or a “Brown Englishman,” this class was “an effective tool to transmit the colonial values and ethos to the rest of the population . . . [and] functioned as the mediator between the colonizers and the colonized” (p. 169). It was this class of local elites that legitimated the colonizing mission.

The benefit of this book rests in the application of postcolonial historiography to early Judaism, particularly during the period of the Hasmonean revolt. While postcolonial studies have made their way into critical readings of the biblical canon as literary texts, much work remains to be done regarding an analysis of ancient history. Victor has taken up that challenge, not simply by examining written historical texts but using the evidence of material culture to develop his analysis. The focus upon the Hellenized elite, especially within Jerusalem, as a wedge group between the Ptolemaic and Seleucid dynasties and the local Jewish underclass is especially useful and an appropriate application of a postcolonial method. That Victor was able to utilize the structures of educational systems to illustrate the dynamics of colonialism suggests that further attention to this area is warranted by other postcolonial historians. Moreover, by focusing on the role of language in colonial projects, Victor illustrates how in colonial contexts multiple layers of culture and multiple groups become enmeshed. Even in the groups most resistant to the Hellenistic enterprise, the Greek language was an inescapable presence.

While an illustrative foray into a postcolonial analysis of early Judaism, the book is limited by its nature as a revised dissertation. There are lengthy portions that recap the research and theories of others that are appropriate for the genre of the dissertation but could be heavily redacted for a monograph. More broadly, this reader was left desiring a broader set of conclusions. In particular, how does the resistance against Hellenism square with the vibrant forms of Jewish life in the Greek-speaking diaspora? How should we account for the adoption of the Septuagint by Greek-speaking Jews, not simply as a translation of the Scriptures of Israel but as the Scriptures? How do the travails of the Hasmonean kingdom reflect the aftereffects of colonialism? What lessons from postcolonial India might shed light on this question? It is hoped that Victor and other scholars will continue a fruitful path in developing a postcolonial historiography of early Judaism.

Daniel Joslyn-Siemiatkoski is the Associate Professor of Church History at Church Divinity School of the Pacific. 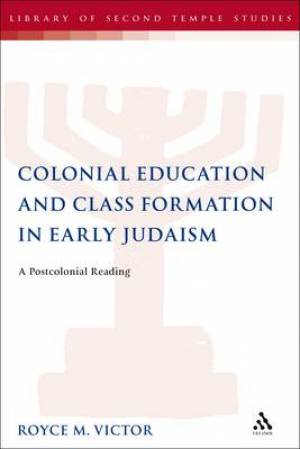